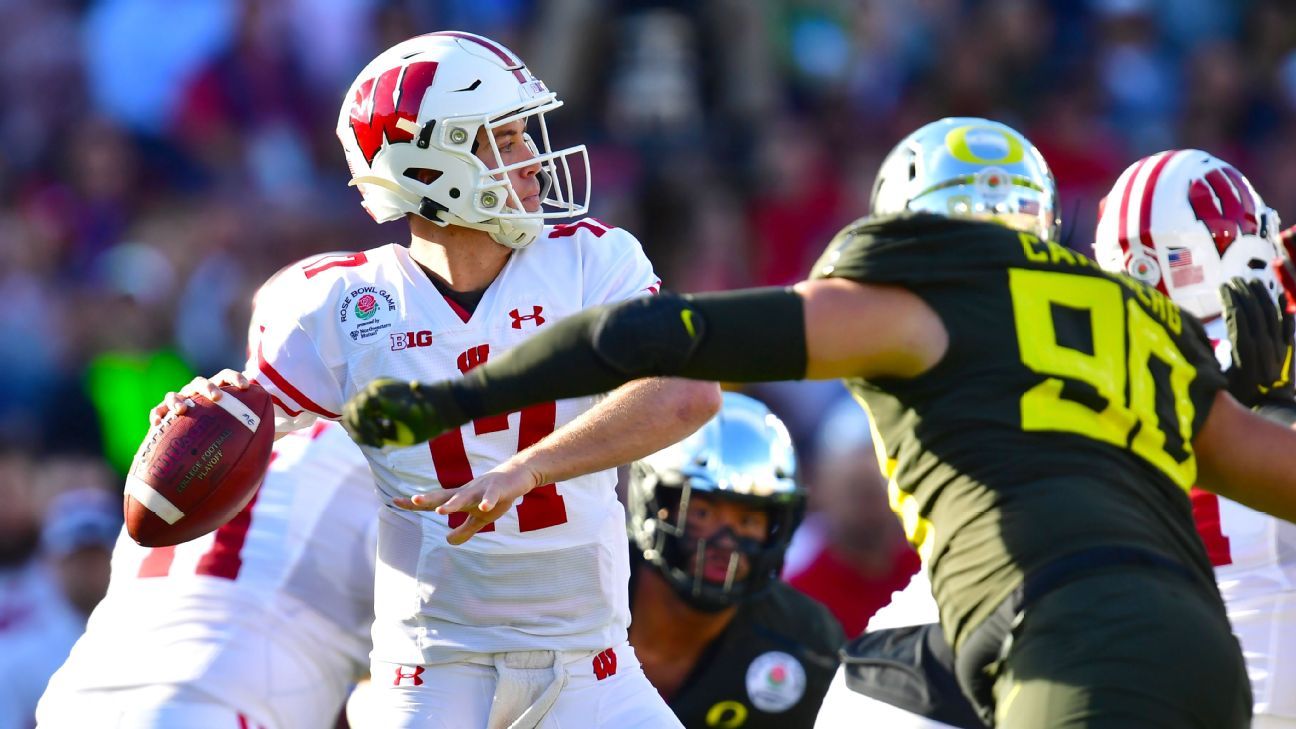 There was a significant increase in the number of college football players entering the transfer portal this offseason.

More than ever, coaches used the portal as part of their recruiting strategy to help fill holes on the roster, in part because the NCAA granted every student-athlete an extra year of eligibility amid the COVID-19 pandemic.

Here is a look at some of the biggest transfers so far at each position, as well as some highly touted players who are still in the portal.

The Seminoles need help at quarterback, and Milton has been cleared to play after his horrific injury at UCF. In 2017, Milton threw for 4,037 yards, 37 touchdowns and nine interceptions, leading UCF to an undefeated season. If he’s able to play close to 100%, he could be a big help on offense.

Coan will replace Ian Book, who threw for 2,830 yards, 15 touchdowns and three interceptions this season, completing nearly 65% of his passes and taking the Irish to the College Football Playoff. Coan won’t have the same team Book did, but if he can improve his numbers — 2,727 yards, 18 touchdowns, five interceptions and a 69.6% completion percentage in 2019 — then he can be a good transition quarterback for Notre Dame.

Jackson was the No. 34-ranked prospect overall in the 2020 class and was one of the top signees in the Texas class. He didn’t play last season, but has a ton of potential and could end up being a steal for Utah, which ranked seventh in the Pac-12 in passing as a team.

Texas Tech is losing Alan Bowman but now gains Shough, a former ESPN 300 recruit from the 2018 class. Shough started for Oregon this past season and completed 63.5% of his passes, throwing for 1,559 yards, 13 touchdowns and six interceptions in seven games.

Peyton Ramsey is gone, and Northwestern is looking for a new quarterback. The staff took in transfer Hunter Johnson from Clemson in 2018, but he hasn’t caught on as the starter. Hilinski completed 58.1 percent of his passes for 2,357 yards, 11 touchdowns and five interceptions his first season at South Carolina. He was eventually passed by Luke Doty, who started most of 2020 for the Gamecocks. It’s a fresh start for Hilinski and an opportunity to gain another starting job.

SMU is losing Shane Buechele to graduation, so a new quarterback is going to have to step up. Preston Stone is a former ESPN 300 quarterback who is already on the roster, but Mordecai has some experience under his belt from his time at Oklahoma. He’ll have to compete with Stone and Derek Green, but he could fit well with what Sonny Dykes wants on offense.

The Wolverines hiring of Mike Hart from Indiana as running backs coach made Charbonnet’s decision to transfer more surprising. He had an outstanding freshman season, with 11 rushing touchdowns and 726 yards on the ground, but only got 19 carries in the 2020 season.

Gray is one of the many Tennessee transfers following Jeremy Pruitt’s firing, and he has only played two seasons so far. He had 772 yards on 157 carries this past season and averaged 8.5 yards per carry. He’s joining an explosive offense and will have three seasons left if he wants to take all of them.

Eric Gray jets through the Missouri defense and rolls into the end zone for the Tennessee score.

Bowman, the No. 23-ranked recruit overall and No. 4 running back in the 2020 class, signed with Clemson but only totaled nine carries for 32 yards this past season. He’s originally from Lakeland, Florida, and now has four seasons to help the Florida offense.

Chandler split carries with Gray and had 456 yards with four touchdowns on 100 carries. He had over 600 yards rushing the two previous seasons along with seven total touchdowns.

Rambo was the No. 207-ranked recruit overall in the 2017 class and had 743 receiving yards with five touchdowns in 2019. He averaged 12.5 yards per reception in 2020 with 312 yards on 25 receptions. Pairing him with returning quarterback D’Eriq King is going to be big for Miami next season.

Robinson was committed to Kentucky out of high school before decommitting and signing with Nebraska. After two seasons, he accumulated 914 yards and three touchdowns to go along with 580 rush yards and four touchdowns on the ground. Kentucky is landing an outstanding playmaker in Robinson, who has three years of eligibility remaining.

Originally from Missouri, Cooper was the No. 113 recruit in the 2020 class when he signed with the Buckeyes. He was one of four ESPN 300 wide receiver commits in that class and didn’t record any stats in 2020.

LSU QB Myles Brennan finds Arik Gilbert for his third touchdown pass of the half and celebrates by pointing at the ice in his veins.

Calcaterra originally retired from football after dealing with concussions, but decided to come back and was going to transfer to Auburn. Following head coach Gus Malzahn’s firing, Calcaterra switched to SMU, and now the Mustangs are bringing in a tight end who had 396 receiving yards and six touchdowns for the Sooners in the 2018 season. If Calcaterra stays healthy, this could be a great get for SMU.

Notable TEs in the portal: Arik Gilbert (LSU and Florida)

Editor’s note: Gilbert chose Florida on Jan. 31 but announce he was re-entering the transfer portal on Feb. 28.

Morris started seven games this past season for Tennessee at left tackle and has played in 22 games over the past two seasons. He’s only a sophomore eligibility-wise and was a five-star prospect in the 2019 class, ranked No. 9 overall.

Storment was only with TCU for one season after transferring from Colorado State. He finished the season as the starting left tackle and was named second-team All-Big 12.

Wilson was a second-team All-Ivy League interior lineman in 2019. A Harvard grad, he originally committed to Auburn but switched to Penn State once Malzahn was fired. He should be able to help right away.

Eze had been the starter at left tackle for the past two seasons at Memphis and was an ESPN 300 recruit in the 2017 class.

Nester started in 16 games for the Hokies over two seasons. He gained national attention as a freshman and should be in the mix to be a starter at West Virginia.

Briggs had three sacks, four tackles for loss and 20 total tackles in seven games for Virginia. Briggs is only a sophomore, so he will still have three years of eligibility remaining.

This was an under-the-radar move for Penn State as Ebiketie had 42 total tackles, four sacks, 8.5 tackles for loss and three forced fumbles this past season for Temple. He was named second-team All-AAC and still has two years of eligibility remaining.

Florida had a big need along the defensive line and are filling it with Newkirk and Penn State transfer Antonio Shelton. Newkirk is a graduate transfer and will be eligible immediately for Florida. He is coming off of a season in which he recorded 28 total tackles and 1.5 sacks for Auburn.

Thomas had 32 total tackles and three sacks this past season and will be versatile in how he can be used along the defensive front at Florida State. He will be eligible right away with only one season remaining to play.

Bryant played for new UCF coach Gus Malzahn at Auburn and is now following Malzahn to UCF. He had initially committed to Tennessee as his transfer spot, but switched to UCF once he knew Malzahn was the new coach. Bryant was a two-year starter with 11.5 career tackles for loss and 10 sacks. He’s a former ESPN 300 recruit and a huge addition for the Golden Knights.

Clemson starting linebacker James Skalski announced he would return in 2021, and Jones entered the transfer portal shortly after. Jones, an ESPN 300 recruit in the 2018 class, will go to LSU coming off of a season in which he had 25 total tackles and a forced fumble.

Hayward has one season of eligibility remaining and is going to help new defensive coordinator Don Brown’s defense at Arizona. Hayward was the MAC Defensive Player of the Year in 2019 after recording 142 total tackles, 10.5 tackles for loss and five sacks.

Dixon is a former four-star recruit from the 2019 class out of Michigan. He had nine total tackles and one forced fumble this past season in his second season on campus. He’ll be a viable option right away at linebacker for West Virginia and has a chance to make an immediate impact. Notable LBs in the portal: Henry To’oto’o (Tennessee), J.J. Peterson (Tennessee), Quavaris Crouch (Tennessee), Palaie Gaoteote IV (USC), Ayodele Adeoye (Texas), Ben Davis (Alabama)

Kirby Smart’s secondary took a huge hit, losing three cornerbacks to the NFL draft, plus another two safeties. Enter Smith, an Associated Press third team All-American in 2020. Smith had 61 tackles, including eight for loss, and two interceptions in 10 games this past season.

Stevenson ranked fifth on the team in total tackles (34) this past season for Georgia, along with one tackle for loss and five pass breakups in 10 games. Miami is returning a few key defensive backs from this past season, but adding Stevenson gives them more options and a proven player in the secondary.

Lars-Woodbey was the No. 70-ranked recruit in the 2018 class and burst onto the scene his freshman season with 59 total tackles, one sack and a forced fumble en route to being named a freshman All-American. He suffered an injury in 2019, then switched positions in 2020 to linebacker and is now landing at Boston College back in the secondary.

Robinson was named to the SEC coaches’ All-Freshman team at South Carolina after recording 62 total tackles and one interception. He followed that up with 74 tackles and an interception in his sophomore season and is now headed to Florida State to provide help in the Seminoles’ secondary.

Lawrence was the No. 102-ranked recruit in the 2020 class when he signed with Tennessee. He played in 10 games his first season in 2020, recording eight tackles and one pass breakup. He was low on the Vols’ depth chart, but has a ton of potential and plenty of time to develop.

Miller is a great addition to Auburn’s secondary and for new coach Bryan Harsin. Miller had one interception, 31 tackles and eight pass breakups in 2020 for the Mountaineers. He’s someone who should be able to provide immediate help, but he won’t be relied on to do everything, as the Tigers return some important contributors as well.