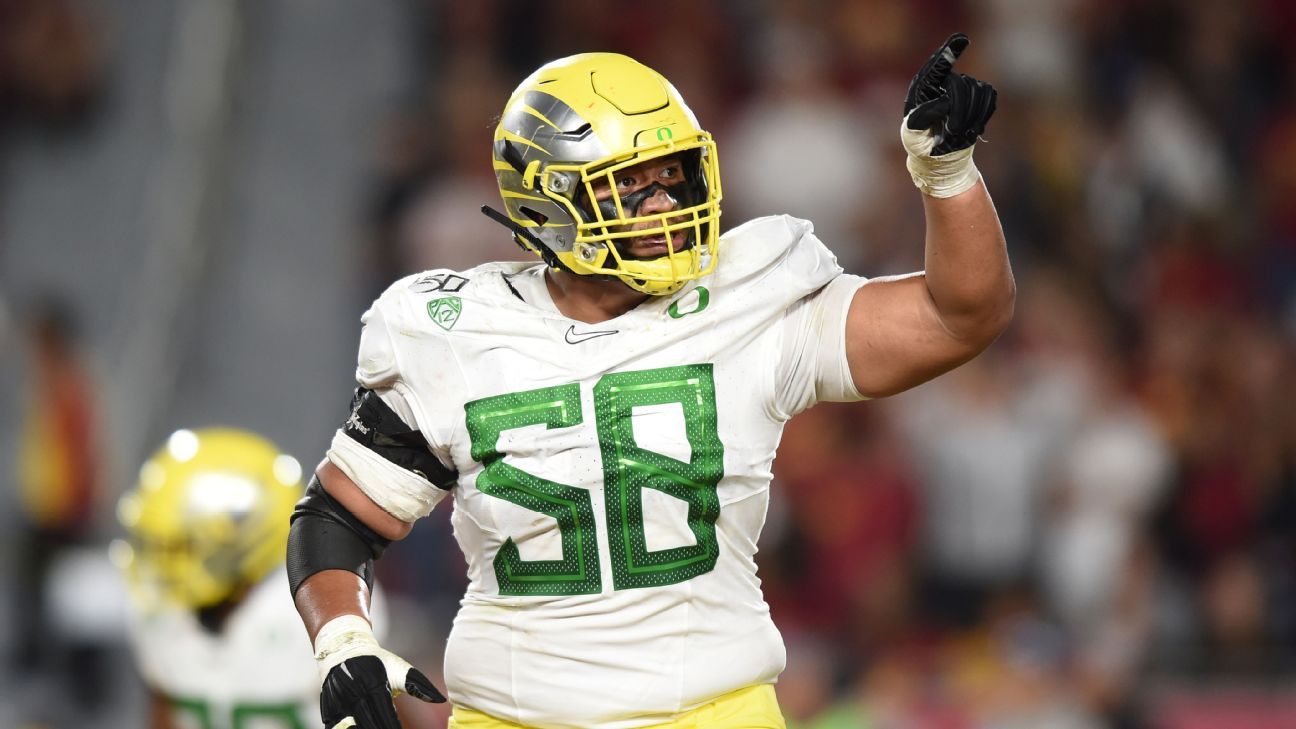 CINCINNATI — The way Penei Sewell shuffled his feet and struck his opponents convinced Oregon coach Mario Cristobal the budding offensive lineman was going to be special.

Cristobal was recruiting the 6-foot-5, 349-pound Sewell, a Class of 2018 tackle from Desert Hills, Utah, located less than four miles north of the border with Arizona. Cristobal believed Sewell was destined to be a playmaker, a descriptor reserved for players who touch the ball.

Sewell needed a mere two years with the Ducks to establish himself as a projected first-round pick in this month’s NFL draft. Many believe the 20-year-old is the top tackle prospect. If the Cincinnati Bengals, who pick fifth overall, pass on Sewell, it could be a unique risk based on the way football is transforming.

Cristobal is convinced Sewell is the best pound-for-pound player in the draft.

“I don’t see a better performer at any position at the college level,” Cristobal told ESPN. “People that study film and understand the value of that, it’s screaming at them. It’s jumping out.

“Let’s just say a couple of people waited a little while on (former Oregon star and current Chargers quarterback) Justin Herbert last year. They were wishing they didn’t.”

ESPN draft analyst Mel Kiper Jr. has Sewell as the top offensive tackle in the draft despite opting out of the 2020 season because of COVID-19 concerns. In 2019, Sewell became the first sophomore to win the Outland Trophy, which is awarded to the nation’s best interior lineman.

Finding quality offensive tackles out of historically strong programs could be a challenge because fewer college offenses run schemes that resemble traditional pro-style attacks employed in the NFL.

Building elite college football teams in the modern era doesn’t necessarily mean building NFL-quality offensive lines. The previous College Football Playoff winners before 2020 — LSU and Clemson — produced more undrafted starting offensive linemen (four) than those selected in the first or second round (zero). Clemson, participants in four of the past six CFP title games and two-time winners, have had two offensive linemen drafted since 2015 and no first-round selections in the Common Draft Era, according to ESPN Stats & Information.

Sewell’s value could be higher because of a future scarcity of linemen as more colleges build to compete with the high-powered offensive attacks dominated by great receivers and quarterbacks.

“I think certain teams will continue to be committed to developing linemen and will incorporate that in their schemes,” Cristobal told ESPN. “But there certainly is a shift.”

In a clip that recently went viral, Saban jokingly called offensive masterminds “Taliban” for how they have turned offenses into forces that leave Saban shaking his leg in church, wondering what is next.

That shift has indirectly affected how offensive lines operate. Pass-blocking has changed drastically as some offenses almost exclusively line up in a shotgun formation and operate off a quick passing game.

The Big 12 has long been associated with this type of offense, a brand that has now seeped into the SEC and even the NFL in recent years. No offensive tackle from the Big 12 has been a first-round draft pick since Lane Johnson went fourth overall in 2013.

Kiper said fewer elite tackle prospects are matriculating to top colleges. That could be attributed to high schools in talent-rich areas running even more open, spread-based schemes than what is seen in college.

Arkansas head coach Sam Pittman, who has been an assistant coach for several future NFL offensive linemen, said evaluating tackles out of such high schools isn’t difficult as long as a recruiter is looking for the right attributes.

While physical traits are important, Pittman is more concerned with finding a tackle who is willing to play hard and aggressively.

“Where (as) if you don’t do that, you can have all the size in the world, the smarts, the brains, the strength, and probably not be pretty good,” Pittman told ESPN.

Because of where a quarterback tends to line up and how briefly he holds the ball, Kiper said not allowing a sack in a given year isn’t a great metric for projecting NFL success. Fortunately for Sewell, he enters the league with more significant credentials.

Sewell was a consensus first-team All-America selection in his final season at Oregon in 2019. Pro Football Focus graded Sewell’s season as the best by an offensive lineman since PFF started issuing marks in 2014.

Cristobal said Oregon’s system features a lot of traditional NFL concepts and terminologies, in part to make sure their players can translate well to the pros. He referenced former left guard Shane Lemieux, a fifth-round pick in 2020, who seamlessly transitioned into being a starter for the New York Giants as a rookie.

Cristobal, who played offensive tackle at the University of Miami, said Sewell is the best left tackle he has ever coached.

“What no one got to see was during workouts, during training and preparation for this past season, this guy’s levels of physicality had gone to an entirely new level,” Cristobal said. “So if they felt he played (well) the previous two years, they were about to get a show, a treat.”

Bengals offensive coordinator Brian Callahan has never had a tougher time scouting college offensive tackles. Because of the evolution of college offenses and the lack of skilled edge rushers, finding film that shows how a tackle’s skills might translate to the NFL is difficult.

“You have to search it out,” Callahan said. “You have to find it. And you really gotta be thorough to determine where you see these guys and how they project.”

That’s partially why Sewell is unique. Many have Sewell projected as a long-term tackle while prospects such as Northwestern’s Rashawn Slater, the No. 2 tackle in the draft, could play different roles, according to Kiper Jr.

The Bengals could start Sewell out at guard, similar to what they did with Andrew Whitworth when he was a rookie in 2006. It’s a challenge Sewell will happily accept.

“I’d love to prove everything that I have on my plate to really come out each and every day to prove that I’m worthy to be in this league and to be a tackle in this league,” Sewell said after Oregon’s pro day. “Whatever I have to do, and whatever steps that looks like, I will do and I will accomplish it.”

At his pro day, Sewell said he wants to play each snap with “violent intentions.” And as for anyone who doesn’t view him as the top tackle in the draft, he implores the skeptics to watch his film.

“Nobody can do what I do in this draft in the offensive tackle rooms,” Sewell told reporters. “I bring something totally different to the table. And I think people know that.”

Cristobal immediately understood that about Sewell when he flipped on his high school highlights.

Cristobal was mesmerized by the quickness, body control and agility of a version of Sewell that weighed around 365 pounds, 44 heavier than what Sewell weighed at his recent pro day. Cristobal said Sewell also had a knack for adapting in space and staying on his feet.

In a few weeks, NFL teams will have to decide if passing on Sewell is a risk worth taking. Teams could opt for a receiver such as Florida’s Kyle Pitts or LSU’s Ja’Marr Chase, especially a club such as Cincinnati that has employed a quick passing game in coach Zac Taylor’s two seasons.

Pittman, the second-year coach at Arkansas, said grades for offensive linemen can vary between evaluators. One team’s top prospect could be a mid-round prospect for another club.

“There’s been some guys I’ve thought would be very high draft picks or in the mid rounds that went in free agency, and there’s been guys that I thought were much lower that went much higher in the draft,” Pittman said. “I’m not sure the determining factor. I think it’s all about needs and those things.”

Some may also have some skepticism about taking Sewell after he didn’t play for a season. ESPN draft analyst Todd McShay said Sewell could have solidified his status as a top-five pick if he had played in 2020. Still, McShay has Sewell as the first offensive tackle drafted and along with Slater, has the potential to be an All-Pro.

“He’s long, he’s athletic,” McShay said in a teleconference on April 5. “He’s not as quick and sudden as Slater from Northwestern, but he’s so hard to get around because he’s so long and big. And once he latches on to you, it’s over.”

In the modern game, there’s no guarantee when the next player like Sewell will be available. That’s a risk NFL teams passing on him must be willing to take.