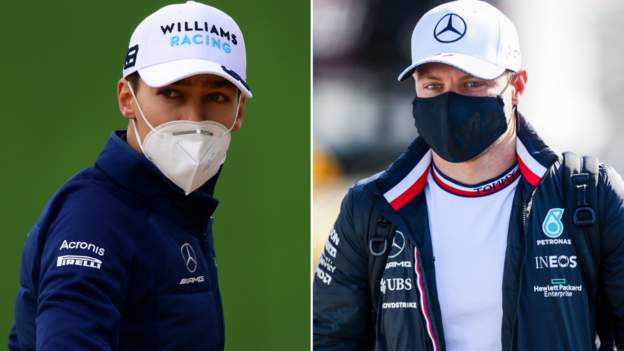 George Russell accused Valtteri Bottas of lacking respect for the dangers of Formula 1 after they crashed in the Emilia Romagna Grand Prix.

Stewards decided the 200mph collision between them was a racing incident and took no disciplinary action.

Russell said: “Your heart stops for a moment when you crash at over 200mph. You don’t know what’s going to happen.

“My anger towards him was that I thought he had put us both in harm’s way.”

Williams’ Russell said he had questioned whether Mercedes’ Bottas would have defended differently if he had been racing another driver.

And he added: “His manoeuvre was within the rules and within his right but it could have been avoided and there should have been a bit more respect for the speed and conditions, in my opinion.

“Fortunately, we both walked away with no battle scars but it could have been very different.

“It was an incredibly scary incident at that speed.”

The two are potential rivals for a seat at Mercedes next year, and Russell outperformed Bottas when he stood in for Lewis Hamilton for the world champions at the Sakhir Grand Prix last year.

Bottas rejected Russell’s interpretation of the incident and his potential motivation.

The Finn said: “I am always going to defend against any driver. I am not keen to lose any positions.

“It was normal defending; it could have been a lot more aggressive if needed, so I don’t agree with any of that at all.

“I was doing my thing and whoever I was defending, it would have been exactly the same.”

What happened in the incident?

The crash happened at half-distance in a rain-affected race as Russell’s Williams was challenging Bottas’ Mercedes for ninth place.

Bottas had struggled in the first half of the race and had not been able to make any progress from his eighth place on the grid, a situation Mercedes admitted they were concerned about.

He had just come out of the pits and was struggling with cold tyres, while Russell, in a car that is usually not fast enough to be able to race with a Mercedes, had stopped two laps before.

The Briton went for the outside approaching the Tamburello chicane. But as Bottas edged slightly to his right to defend, the Williams caught the damp part of the track and spun.

Bottas also spun and the incident littered the track with debris, bringing the race to a temporary halt.

Russell went over to Bottas and remonstrated with him while he was still sitting in the car. The Finn replied with a middle finger salute, after which Russell brushed his helmet with his hand.

Bottas said: “He knew it was going to be damp there and I knew as well and it is just not the place to go in those conditions on slicks. But he still went there and it was his choice to go there.

“I was doing my job trying to defend. I am not going to move and give him the dry part of the track.”

Russell said: “The move was absolutely on. It was only three-quarters of the way down the straight and it would have been a clear easy overtake had it not been a little bit damp at that point.

“It wasn’t damp where I pulled out. The track was going left and I was squeezed slightly to the right and that’s where the dampness was. Should I have reacted as I did afterwards in the heat of the moment? Probably not but the emotions are incredibly high.

“It was just an unfortunate set of circumstances, which could have been avoided.

“Was Valtteri in the wrong? Probably not. Could he have done something more? Maybe. Was I in the wrong? I caused the crash by spinning but was I wrong to go for the overtake? Absolutely not. It would have been foolish to lift in that position.”

What did Mercedes say?

The stewards ruled that neither driver behaved erratically and that Bottas maintained his line and left a car’s width on his outside as required by the regulations.

They added that Russell’s car snapped when it hit the wetter part of the track partly as a result of the lack of rear downforce caused by the DRS overtaking aid being deployed.

Mercedes F1 boss Toto Wolff said neither driver was wholly to blame but that Russell, who is on a management contract with the company, should have taken into account who he was racing.

“There is never a situation in life where one is responsible and the other zero,” Wolff said. “The whole situation should have never happened.

“Valtteri had a bad first 30 laps and shouldn’t have been there but George should never have launched into this manoeuvre considering the track drying up.

“It meant taking risks and the other car is a Mercedes in front of him. In any driver’s development, for a young driver, you must never lose this global perspective, and so lots to learn for him, I guess.”

Wolff rejected the claim that Bottas had reacted differently because of the context of him fighting Russell.

He added: “The whole situation is not amusing for us, to be honest. It’s quite a big shunt. Our car is not going to be a total write-off but almost, in a cost-cap environment. That is certainly not what we need and is probably going to limit upgrades we are able to do.

“You need to see there is a Mercedes and it is wet. It bears a certain risk to overtake and the odds are against him anyway when the track is drying up.