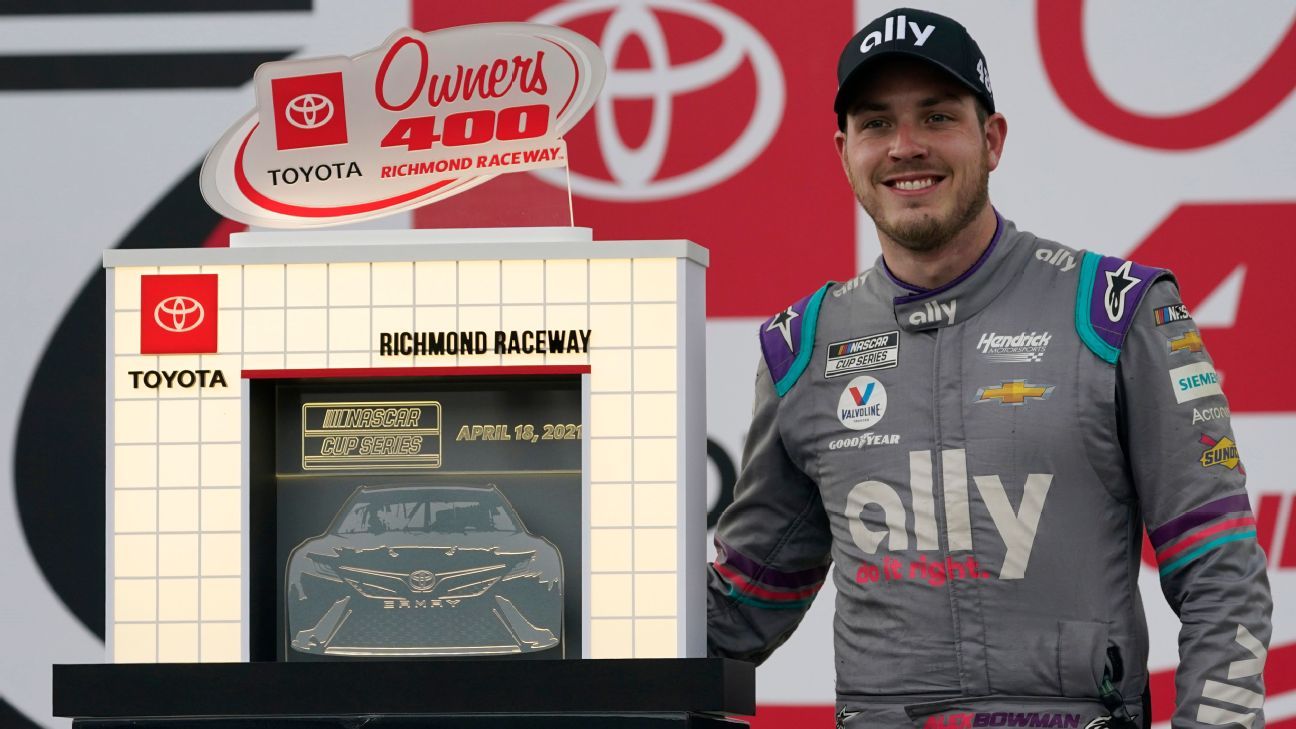 RICHMOND, Va. — Another week, another agonizing loss for Denny Hamlin.

And this time it was to Alex Bowman, who came from nowhere with 10 laps to go at Richmond Raceway to put the No. 48 Chevrolet in victory lane for the first time in nearly four years.

Bowman won for the third time in his career Sunday and denied Hamlin a win in a race he had dominated to become the eighth winner in nine Cup races this season. He dedicated the victory to crew member William “Rowdy” Harrell and his wife, Blakley Harrell, who were killed in a November car crash in Florida while on their honeymoon.

“This one is for Rowdy and his family. Miss him and Blakley every day,” Bowman said.

Bowman’s victory in the No. 48 Chevrolet for Hendrick Motorsports came on the same day the former driver of the car, seven-time champion Jimmie Johnson, made his debut in the IndyCar Series in Alabama. It was the first victory for the No. 48 since June 4, 2017.

Johnson was the only driver of the No. 48 when it was formed in 2001 and Bowman was hand-picked by sponsor Ally to replace him.

Bowman overcame a penalty on lap 247 for a loose tire on pit road to rally for the win.

For Hamlin, it was the third defeat in three races.

At the dirt race at Bristol Motor Speedway he didn’t do enough to move Joey Logano out of his way to earn the win, and last week at Martinsville Speedway he was caught late by Joe Gibbs Racing teammate Martin Truex Jr.

In Richmond, Hamlin raced with the hashtag (hash)fedexstrong on the back of his car and on his pit wall to honor the eight people who were fatally shot at a FedEx facility in Indianapolis on Thursday. He again had the dominant car and led 207 of the 400 laps. He’s led 483 laps the last two weeks.

“First and foremost, we want to think of all of the families in Indy right now,” Hamlin said. “Awful tragedy to happen there. Our thoughts and prayers are with these names. We will get (wins). We will keep digging. We are dominating — just have to finish it.”

“We just didn’t take off quite as good there at the end. I tried to warm it up and do everything that I could — just the 48 had a little more on those last few laps and I couldn’t hold the bottom,” Hamlin said.

Last week, he led 276 laps at Martinsville Speedway, but lost the lead to Truex with 15 laps to go.

Hamlin did hang on Sunday to finish second, followed by Logano, Christopher Bell and Truex, who led 107 laps and overcame a penalty for speeding on pit road. Kyle Busch finished eighth, the second week in a row that all four JGR drivers finished in the top 10.

“Denny and I had a hell of a race,” Logano said. “It was pretty fun there for a minute, but here we are third. It stings. We were up there all day.

“The 48 kind of snookered everybody.”

After three straight races on short tracks, the series heads to the largest track in NASCAR — 2.66-mile Talladega Superspeedway in Alabama.