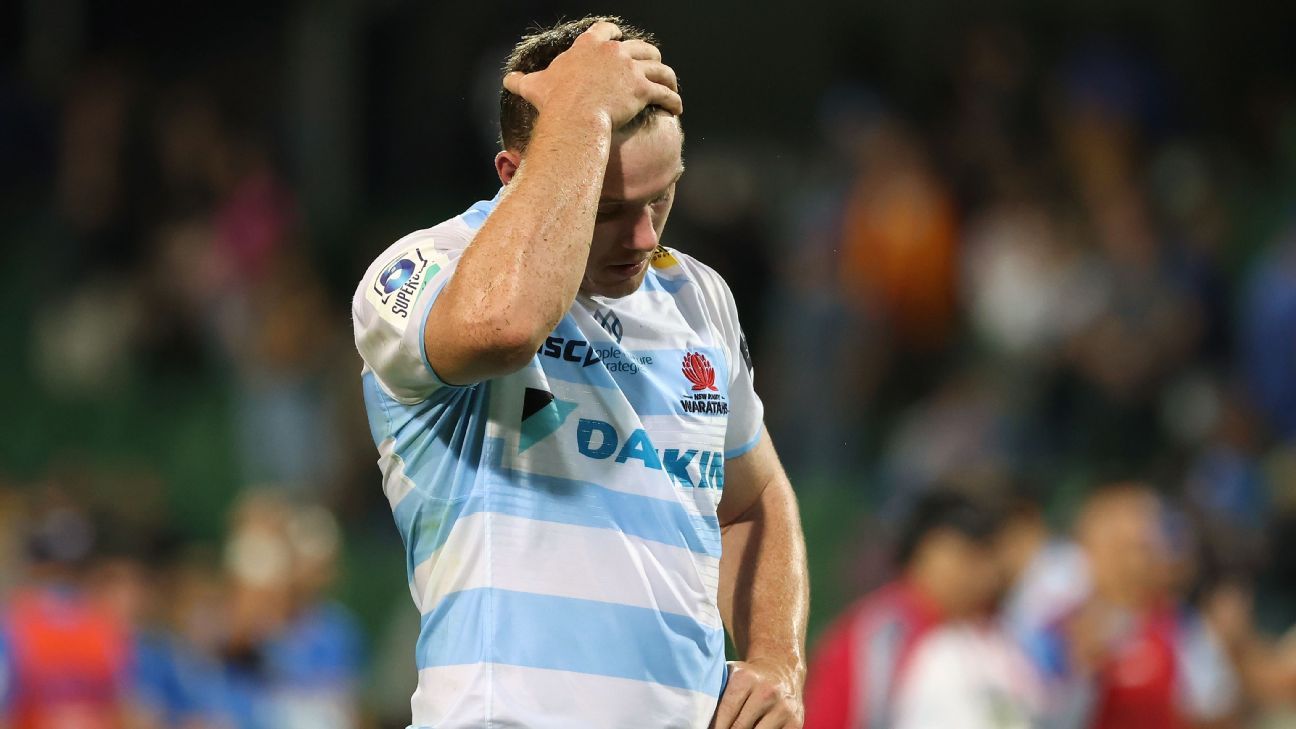 The stage is set for a thrilling conclusion to Super Rugby AU’s regular season with just two points separating the Force and Rebels in the race for the final playoff spot.

Meanwhile in New Zealand, Super Rugby Aotearoa has suddenly sprung to life as the Crusaders suffered a second loss in three games, this time at the hands of the resurgent Chiefs.

Read on as we break down some of the big talking points from the weekend’s action.

The Rebels on Sunday missed a golden opportunity to put one foot in the semifinal against the Brumbies, when they bumbled their way to a six-point defeat by Dan McKellar’s side.

The Brumbies were down on troops, and well below their best, yet they still did enough to ensure they enter this week’s bye with plenty of positivity and can then turn their attention to getting the job done at home and earning another shot at the Reds.

The Rebels, meanwhile, will rue a lack of accuracy and many simple errors, one of which fell right into the comical category.

With the game in the balance early in the second half, the Rebels were forced deep back into their own half by a Brumbies kick. Having scooped up the ball, Matt To’omua attempted to clear to touch but the Rebels skipper completely bottled his kick and thumped it straight into the head of retreating teammate Josh Kemeny.

The ball ricochet into the path of Brumbies No. 7 Rory Scott, who was a standout on debut, the flanker picking it up and firing a perfect pass to Bayley Kuenzle who had enough gas in the tank to run to the corner for the try.

It was a moment of utter embarrassment for both Kemeny and To’omua and one that must have had Rebels coach Dave Wessels with his head in his hands.

The Rebels have good rugby in them, no doubt. But there have been too many errors at critical times and mistakes like the To’omua kick reflect their position on the ladder and why they need to beat the Waratahs in Sydney this weekend to earn another shot at the Brumbies.

And that trip to Sydney suddenly looks an entirely different prospect to what it did 10 days ago. Having pushed the Brumbies all the way to the final siren, the Waratahs blew another golden opportunity for a drought-breaking win when they overthrew a lineout in Perth and afforded the Force one last opportunity to attack.

As is often the way in shadows of fulltime, the Force were able to retain possession long enough to draw an infringement from the Waratahs. Coming directly in front of the sticks, fly-half Domingo Miotti had little trouble in securing a dramatic 31-30 victory.

The result has the Force two points clear of the Rebels ahead of this week’s visit from the undefeated Reds. While the Queenslanders may look to rotate a few players, they will also be mindful of the fact that they have next week off which would mean they have played just twice in the space of four weeks when the final rolls around.

So Brad Thorn may in fact look to play his best available line-up in the interests of ensuring the Reds are as sharp as possible for the decider.

GREEN SHOOTS OF HOPE FOR THE WARATAHS

2021 won’t be a year the Waratahs recall fondly, but at last there looks to be some brighter days ahead, that could even result in a first win for the year this weekend.

While they missed out on the result in heart-breaking fashion in Perth, the Waratahs were well served by centre Izaia Perese and young No. 10 Ben Donaldson.

Perese was a handful for the Force throughout the 80 minutes as he repeatedly powered his way through tackles and added four offloads to boot. He also hit hard in defence, though he did slip off a number of tackles after making the initial impact.

Still, his three-week ban for a lifting tackle earlier in the year is just another low point of the Waratahs’ season, particularly given the form he has shown since his return.

Donaldson, meanwhile, had been the subject of intense selection discussion during the build-up after he was preferred to Eastwood’s Tane Edmed, who had made a number of appearances off the bench already this season.

Donaldson’s selection prompted heavy criticism from Eastwood coach Ben Batger, but there was a lot to like in the Randwick youngster’s composed performance. Donaldson generally piloted NSW around the paddock consummately, and helped to lay on a nice try for Jack Maddocks; he also kicked 15 points.

It seems more than likely that Donaldson will retain the No. 10 jersey for this weekend’s closing encounter with the Rebels and on the strength of his effort in Perth you would have to say that is exactly what he deserves.

AS CONTEST FOR WALLABIES JUMPERS HEATS UP, SWINTON’S CARDS WILL PLAY AGAINST HIM

Three minutes into his first match back from injury and Lachie Swinton was presented a yellow card after he lifted a Force player above the horizontal and drilled him into the turf. It seems an all too familiar sight for Waratahs and Wallabies fans with the young back-rower finding his way into referees’ bad books way too often.

Last year it was a red card in his Wallabies debut against the All Blacks after a dangerous, high tackle on Sam Whitelock. It ended his match after just 34 minutes, resulted in a four-match suspension and he also became the first Wallaby ever to be red carded on debut — that’s history you don’t want attached to your name. This week it resulted in the Force crossing the chalk almost immediately and taking a 10-point lead, he’ll no doubt also face the SANZAAR judiciary.

With the contest for a Wallabies jumper heating up, Swinton’s disciplinary issues have surely placed him even further on the back foot. Brumbies No. 6 Rob Valetini had another impressive performance on Sunday against the Rebels, Reds’ Harry Wilson has been unstoppable, while rookies Tim Anstee and Josh Kemeny have also been putting their hands up during Super Rugby AU and were rewarded with inclusion at last week’s three day Wallabies camp.

Before Super Rugby 2021 started Swinton said he was keen to put his red card behind him, move on and perhaps work a little on his tackle technique, it would, however, not change the way he plays.

An aggressive enforcer, Swinton is known for his bone-crunching tackles and his take no prisoners’ mentality; he’s the rough and tumble the Waratahs and Wallabies have been missing in their back-row. But there’s a fine line between tough, aggressive play and dangerous and it’s a line Swinton needs to be more aware of.

Watching over his yellow card tackle on Saturday night, you can see there was no malicious intent, but simply a player looking to make a strong, defensive hit, it’s his accuracy however that has let him down and it’s an area he’ll need to work on if he wants to build his Wallabies caps.

CHIEFS HAVE REALLY SHAKEN THINGS UP

They remain in the box seat to host the Super Rugby Aotearoa final but there is little doubt the Crusaders have come back to the pack in New Zealand over the last few weeks.

Comprehensively dismantled at home by the Highlanders, and then taken all the way to golden point by the struggling Hurricanes, the Crusaders were on Saturday night beaten by the Chiefs. The margin was only one point but having for so long had the edge in these tighter contests, it is a result that reinforces the message that the Crusaders are beatable, particularly when they are ever so slightly off their game as they have been over the past few weeks.

The Crusaders’ best rugby is more than the other teams can handle, but it hasn’t been seen through the second half of the competition to date.

Meanwhile the Chiefs and Highlanders have improved significantly, and now both teams find themselves back in the hunt for the final along with the struggling Blues.

WHAT ON EARTH WERE THE BLUES, HODGMAN, THINKING?

There were two moments towards the end of the Blues’ 35-29 loss to the Highlanders that harked back to the franchise’s dark old days, or at least something not associated with their recent efforts under Leon MacDonald.

Certainly the captain’s challenge has been a tough concept for all the New Zealand teams to grasp at times, and it seems likely that its presence as a law variation won’t be extended beyond this year.

It was hard to see what the Blues were indeed challenging, and they were rightfully robbed of their referral when the officials were left equally bemused a couple of minutes later.

But there was worse to come for the visitors when replacement prop Alex Hodgman was rightfully shown red for a shoulder charge to the head of Highlanders replacement James Lentjes.

The challenge was perfectly summed up by Sky Sport caller Tony Johnson who said: “At a time when there is so much talk about player welfare, that is inexcusable.”

Hodgman should expect a lengthy stint on the sidelines, at least one that won’t see him seen in Super Rugby Aotearoa again this season.

Five Australian referees have been given the ultimate praise for their tireless work on the field with their selection as match officials for the 2021 Tokyo Olympic Games.

Amy Perrett will head-up the Australian contingent after she was selected for her second Games appearance, with fellow referees Damon Murphy, Jordan Way, Madeline Putz and Tyler Miller given the nod for their first Olympics appearances.

Perrett has been one of the top referees throughout Super Rugby AU 2021 after making her Super debut last year and will potentially blow the whistle during the new Super Rugby trans-Tasman competition set to launch in May.

The first female to referee a Super Rugby match, Perrett has continued to gain attention for all the right reasons through her efforts in the middle and will no doubt step up on the big stage while managing some of the best women’s sevens matches.

The selection of all five is high praise not just for the referees themselves, but also the national referee program, with Australia providing the largest contingent in the 22-person team.