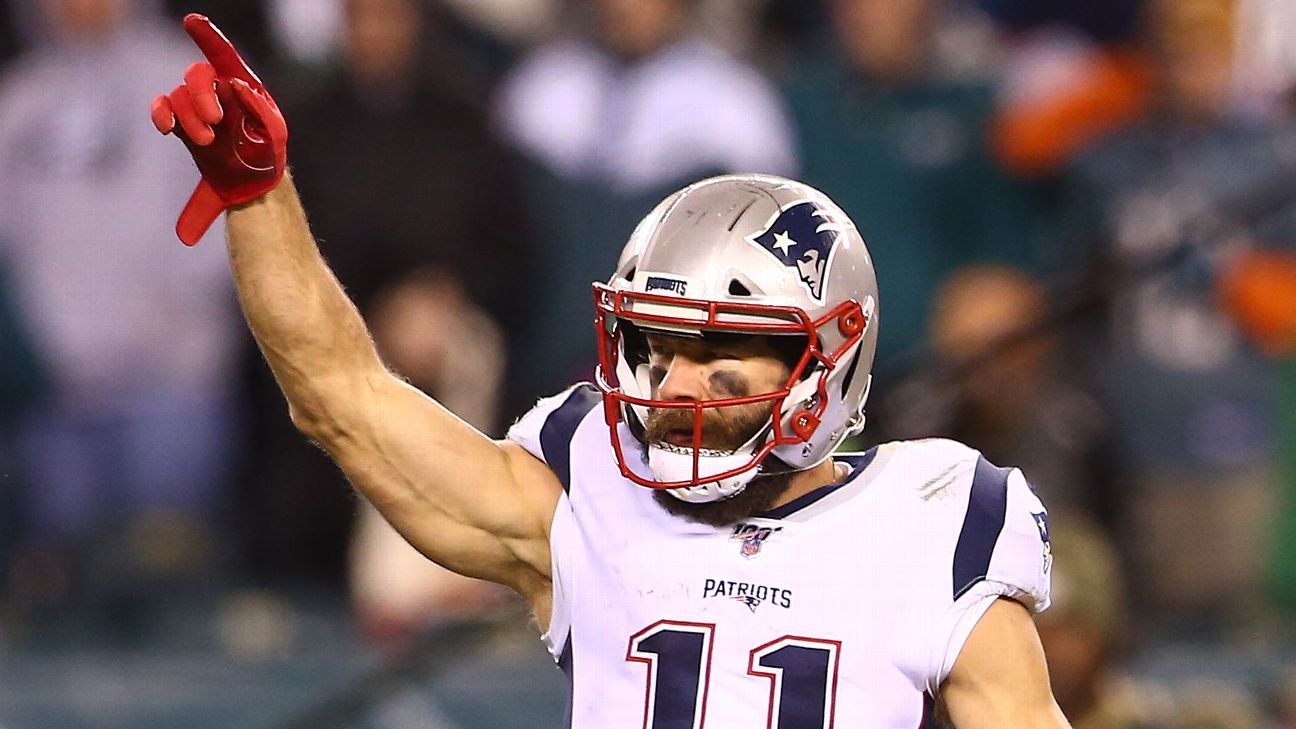 FOXBOROUGH, Mass. — Quick-hit thoughts and notes around the New England Patriots and NFL:

1. Finding Edelman: Former Patriots vice president of player personnel Scott Pioli shined a spotlight on how the team found Julian Edelman at Kent State, posting a tweet noting that area scout Jim Nagy put Edelman on the team’s draft board and then advocated for him as part of the cross-check process.

When reaching out to Nagy, now the executive director of Reese’s Senior Bowl, he deflected any credit following Edelman’s retirement last week. Nagy said it should all go to Edelman and others, such as former longtime receivers coach Chad O’Shea.

In revisiting his work as an area scout in 2008, Nagy helped paint the picture of how Edelman first landed on the Patriots’ radar at Kent State. It’s a good look at the essence of college scouting.

“I was living on the west side of Cleveland at the time, so the MAC schools were a big part of my territory. This is coming off the Josh Cribbs era at Kent State, so I was rolling through there. It was an easy stopping-off point. I could hit Kent on the way home from Pittsburgh, West Virginia and Akron. I probably went in there three times that fall of [2008].

“You develop relationships with people at schools when you visit often — their pro liaison was Casey Wolf. Dean Pees was there when Josh Cribbs was there. Scouting Julian, it was pretty clear he was going to be a hard guy to generate interest in the building as a quarterback. At that time, we were really looking for the 6-3, 6-4, 6-5 pocket passers. We had Tom [Brady]; we had [Matt] Cassel.

MAD respect Julian Edelman & how YOU worked to become terrific player. YOU did the work & took coaching to develop. All YOU🙏🏽
Have my ’09 Draft Book w/ #Patriots 2008 DEC Meeting notes & remember area scout Jim Nagy put him on Pats board as WR in fall & advocated thru crosscheck pic.twitter.com/peqaxdGnMC

* upper echelon worker
* knows his physical limitations
* likes to BS
* wants ball in his hands
* football instincts will help him at WR
* has feet to play DB
* most competitive guy I’ve ever coached pic.twitter.com/bCuyhG7iq3

“But Julian was a heck of a football player, and you don’t want to discard really good football players. So you think outside the box and try to get creative, try to find a role for him. There were reasons you thought it could work. He had incredible short-area quickness. He had really good reactive cutting ability. He had great football instincts in terms of feeling people — spatial awareness, things of that nature. Extremely tough with the ball in this hands.

“Digging into the background part of it, he was extremely competitive. The fact he was a California [Junior College] kid and assimilated at a school in the Rust Belt, that’s not easy to do. He’d come out to practice and B.S. with the wideouts, so you could tell he was comfortable with that position group, and that made you feel good — that he was one of the guys.”

Nagy recalled that Edelman just wanted to play football, and bought into the idea of a position switch in the pros — which doesn’t always happen with prospects. The Patriots had December scouting meetings, and then their standard cross-check process in February, with Pioli assigning Nagy wide receivers as his cross-check position. Through that process, Edelman landed on the team’s draft board.

Soon after the combine in 2009, Nagy departed the organization for the Chiefs, where Pioli had been hired as general manager. Director of player personnel Nick Caserio took the baton from there and made sure the Patriots had representatives at Kent State multiple times for pre-draft workouts.

When the Patriots were on the clock with the 232rd pick, with 256 total selections in the draft, they had a decision to make.

“You have to give them a lot of credit, because you have a lot of guys graded in that later-round area that you have to decide as a group; ‘We have 20 guys here, which one are we spending a draft pick on? Which one don’t we want to get in a bidding war [to sign] in free agency?'”

Still, Nagy could have never envisioned the way things unfolded for Edelman.

“I wouldn’t have thought he would become one of the franchise’s all-time greats. No way,” he said. “In hindsight, it’s really cool to look back. It’s a credit to Julian.”

Dan Orlovsky says Bill Belichick and the Patriots can’t afford to be complacent in the NFL draft.

2. Draft exam: Bill Belichick didn’t sound like a coach strongly considering a move into the top five of the 2021 NFL draft (April 29-May 1 in Cleveland, on ESPN and ESPN App). In his pre-draft videoconference Thursday, he said: “I think the best thing we can do is do our homework, know the players, know the board, and when we walk into the room for the final exam and then we see the questions on the test when it comes our turn to pick — or maybe a few spots in front of our pick — then we have to potentially start making some decisions.”

3. Trade winds: Since Belichick was named coach in 2000, the Patriots have made 82 draft-day trades. That’s easily an NFL high, with the Philadelphia Eagles second (61).

4. Intrigue at all-time high: When Belichick logged in for his videoconference Thursday, he was greeted by 83 media members. 83! As Judy Battista of NFL.com noted, that has to be some type of offseason record as those looking to ask a question had to take a number like they were at the deli at their local supermarket. The 83 media members reflect the intrigue surrounding the team’s draft plans.

5. Groh-ing into role: Belichick highlighted national scout Matt Groh as one of the leading staffers in the Patriots’ pre-draft preparation, along with Dave Ziegler, Eliot Wolf and Matt Patricia. Groh (now in his 11th season in New England) is the son of former Patriots assistant Al Groh, and he has an interesting career path: He played quarterback at Princeton, graduated with a degree in psychology, and then went on to earn a law degree at Virginia. A career in football ultimately trumped one in law.

6. Patriots and OTAs: A statement last week regarding how players will approach the offseason program, released through the NFL Players Association and attributed on behalf of “New England Patriots players,” seemed to be a case of threading the needle. It essentially said that some players will be attending the workouts and others won’t. That isn’t a huge newsflash. The workouts, after all, are voluntary. My viewpoint: Players wanted to show support to their union, and by extension, to their peers who are seeking more clarity and transparency on what the program will entail from a health and safety standpoint. But come mid-May, barring an unexpected event, I’d be surprised if the majority of the Patriots’ roster isn’t present.

7. Newton’s bonus: Cam Newton has a $100,000 workout bonus as part of his one-year contract, which ties him with core special-teamer Brandon King as the richest among Patriots players. Newton would forfeit that amount if he doesn’t attend voluntary workouts, but after everything he said last year, he would forfeit something much more important: On-field time to work in the offensive system. In perhaps a hint that Newton will be attending on-field workouts in mid-May, he’s been in town the past week working out.

8. Adams in town: Former Packers defensive tackle Montravius Adams, who signed a one-year deal with a base value of $1.095 million in New England, has been a regular visitor at Gillette Stadium over the past week as he integrates into the team’s system. He has a $25,000 workout bonus as part of his contract. The 6-foot-4 and 304-pound Adams was a third-round pick in 2017 out of Auburn who hasn’t met his draft-slot expectations, and the hope for him (and the Patriots) is that a fresh start helps turn things around.

9. Thin UDFA class: The Patriots have 76 players on their roster, and if they make all 10 draft picks, that would lead to a thinner-than-usual four-player undrafted class to reach the 90-man limit. Here’s a point one agent made in conversations last week — because the overall volume of players who signed with agents is down this year as a result of the pandemic, the quality and depth of the undrafted class is expected to be lower than usual.

10. Did You Know: The Patriots have had a rookie free agent make the 53-man opening-day roster for 17 straight seasons, the third-longest streak behind the Chargers (24) and the Colts (22). The streak was in jeopardy last year when no undrafted rookie made the initial 53-man roster, before the Patriots signed running back J.J. Taylor (Arizona) from the practice squad two days later.