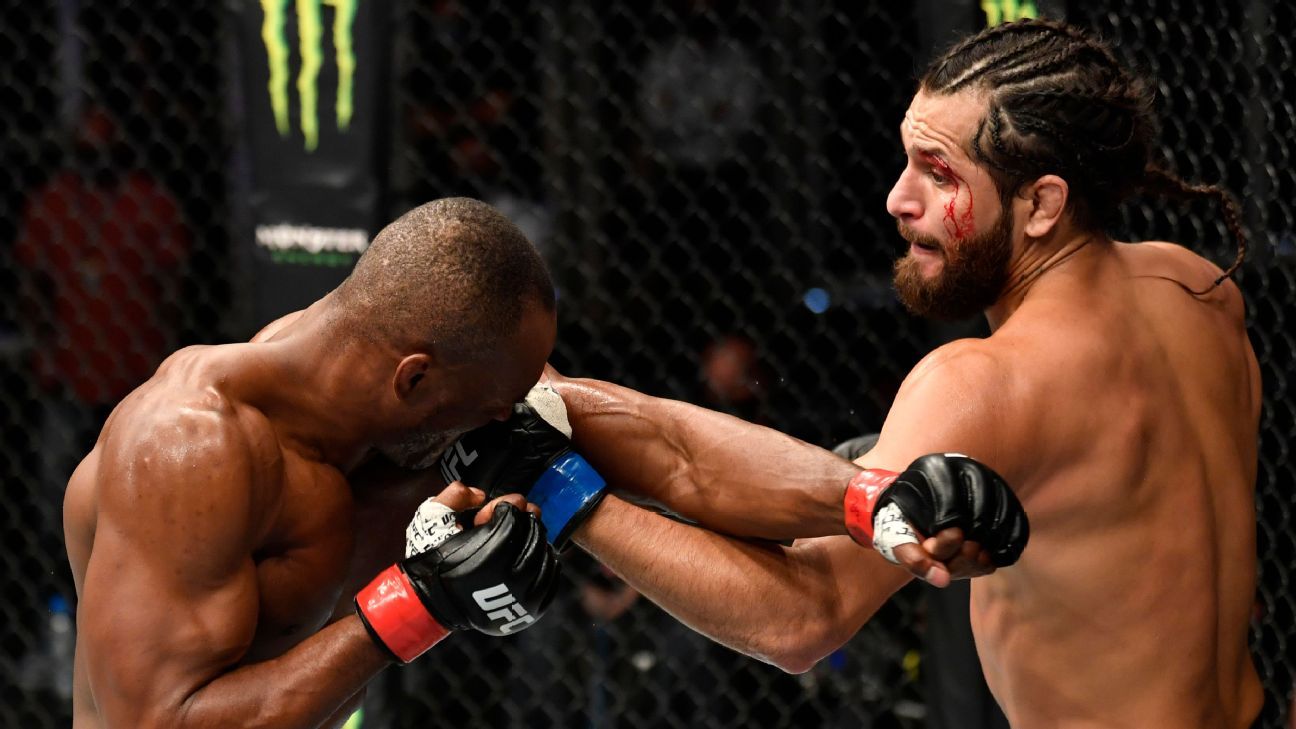 Fight week for UFC 261 has arrived, and with a card of this magnitude, the stakes could not be much higher. Three title fights could reshape the trajectory of the welterweight, strawweight and women’s flyweight divisions overnight.

If Jorge Masvidal defeats Kamaru Usman, they would be 1-1 in title fights. That could mean a trilogy bout, but would that make the most sense for Masvidal or the UFC as a whole? Usman is a betting favorite in the rematch, and he’ll have an asset he didn’t have the last time around — heavyweight champion Francis Ngannou in his corner. Will it help?

The UFC will return to live events with a full crowd at UFC 261 in Jacksonville, Fla., where three title fights — headlined by welterweight champ Kamaru Usman defending against Jorge Masvidal — will play out in front of 15,000 fans. Women’s strawweight champ Zhang Weili and flyweight champion Valentina Shevchenko also defend their belts.

Zhang Weili hasn’t fought in over a year, since she defeated Joanna Jedrzejczyk in her first defense of the UFC strawweight belt. That fight took a physical toll on both fighters, but will that layoff ultimately be a benefit or a hindrance for Zhang?

Finally, there’s Valentina Shevchenko‘s women’s flyweight title defense against Jessica Andrade. After dropping a round in her most recent title defense, against Jennifer Maia, is Shevchenko’s grip on the division loosening? And is Andrade her biggest challenge to date at 125 pounds?

Our panel of Ariel Helwani, Marc Raimondi, Brett Okamoto and Jeff Wagenheim breaks down what’s real and what’s not in the lead-up to UFC 261.

If Masvidal wins, a trilogy against Usman would be the biggest fight to make as his first defense.

Helwani: As crazy as it might sound to some, not real.

Honestly, I don’t remember a situation in recent history where a potential new champion has four massive fights waiting for him, should he win the belt. I’d rank them as so:

1) Nathan Diaz, if he beats Leon Edwards on May 15

Though, I could be convinced to move Edwards up to three. That’s how big options 1 and 2 would be.

Imagine, for a second, Masvidal wins on April 24. And then, less than a month later, a returning Diaz beats the streaking Edwards. The BMF title rematch would be huge.

If that doesn’t come to fruition, a friends-turned-foes title fight between Masvidal and Covington would be bananas, too.

Of course, make no mistake about it, a trilogy would be big business, too. They really can’t go wrong. All Masvidal has to do is beat one of the greatest welterweights of all time first.

Having Ngannou work his corner will prove to be a valuable asset for Usman.

Raimondi: Let’s get this out of the way at the start. No, Francis Ngannou has not been part of Usman’s training camp. He’s very unlikely to be a prominent voice in Usman’s corner at UFC 261. And it’s a long shot that Ngannou will be talking techniques and tactics to Usman during the bout.

With all of that being said, of course Ngannou will be a valuable presence for Usman — the same way Usman was for him at UFC 260 when Ngannou knocked out Stipe Miocic to win the UFC heavyweight title. I had the privilege of interviewing Usman last week and the first thing he said when I asked him about Ngannou was about how much Ngannou inspires him.

Ngannou’s story is well-publicized at this point. He emigrated from Cameroon to France, but along the way he was jailed in Spain and then rendered homeless. This was all less than a decade ago. And now Ngannou is the heavyweight champ, the “baddest man on the planet.” Look how much he improved against Miocic last month, compared to the first fight between the two of them in 2018. Ngannou is a special man with a story that will have to be made into a movie one day.

Not every person in a fighter’s corner is there for X’s and O’s. Usman will already have his head coach Trevor Wittman, one of the best minds in MMA, with him. He’ll have his trusted confidante Jorge Santiago, one of his original Brazilian jiu-jitsu coaches, with him. Ngannou is taking the place of Usman’s brother Mohammed, who will be in the PFL bubble preparing for his own bout next month. Ngannou’s presence alone will bring Usman confidence and support. Chris Weidman had his father in his corner when he knocked out Anderson Silva. It wasn’t because Charlie Weidman is a fighting savant. But he was a comforting figure alongside coaches Ray Longo and Matt Serra.

Usman and Ngannou are two of three African-born current UFC champions, joining Israel Adesanya. The three of them have become close friends. They talk often. Ngannou spoke about the pressure he felt trying to join Usman and Ngannou as an African champion. Having Ngannou in his corner — the way Usman was in Ngannou’s corner — is the natural progression of the friendship and camaraderie.

On top of all that, why wouldn’t you want one of the toughest human beings on the planet in the foxhole with you?

Despite a layoff of over a year, ring rust won’t be a problem for Zhang.

Okamoto: Real. I mean, when it comes to ring rust, it’s always hard to predict, right? It affects different people in different ways. But personally, I don’t see time off being a factor in this fight at all.

Sure, Rose Namajunas fought in July, which is more recent than Zhang Weili’s fight in March 2020, but it’s not as if Namajunas has been fighting every week. These two had the same number of fights in 2020. Zhang actually had more in 2019.

If anything, Namajunas’ inactivity in general is worth noting. She only fought once in 2018, 2019 and 2020. Plus, Zhang’s last fight, a five-round war against Joanna Jedrzejczyk, was the kind of fight you want to see a fighter take some time off after. Activity always tends to be a good thing for athletes, but in this case, I don’t see the inactivity as a problem on either side.

Andrade will be Shevchenko’s toughest opponent to date at 125 pounds.

Wagenheim: Looking closely at the wording of that statement, I have to say it’s not real. Had I been asked whether Jessica Andrade will be the toughest title challenger for Valentina Shevchenko, I might have gone the other way. The champ has made four defenses of her belt, and while two of those fights went the distance, Shevchenko has been in control for practically every moment of her reign of nearly 2½ years.

She controlled the December 2018 title fight that made her a champ, too, but her opponent that night, former strawweight champion Joanna Jedrzejczyk, has a sharp stand-up game that presents problems from all angles. Andrade, on the other hand, comes straight at you. She does so with a vengeance, and if she gets to you, she has the explosive power to end your night. Andrade knocked out Katlyn Chookagian in her flyweight debut last October, and she also has knockouts at 135 pounds. She’s dangerous.

But Shevchenko is such a master at range that I believe it will be difficult for Andrade to reach her. Jedrzejczyk didn’t have a ton of success against Shevchenko, winning just one round, but I believe she presents a more complex set of looks and movement. So she was at least as much of a problem for Shevchenko as Andrade will be.