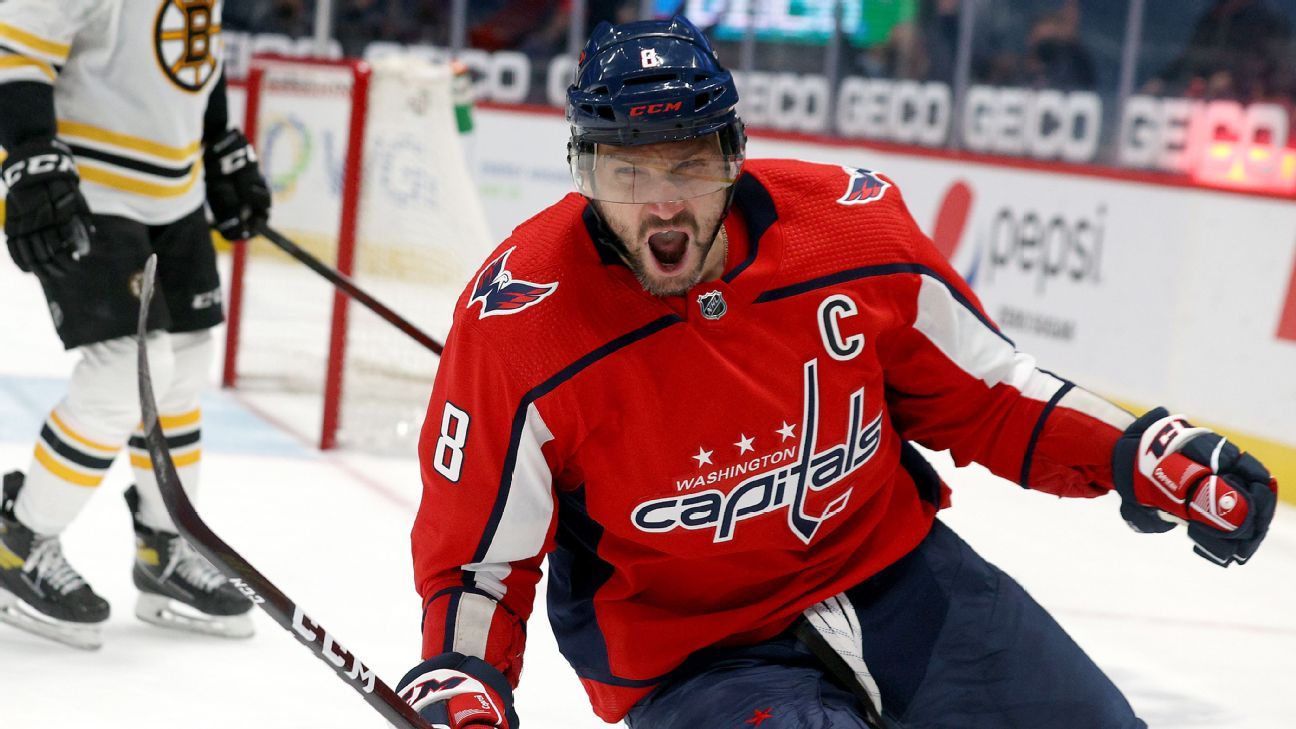 “The modern game, the speed, the physicality … players are playing at a young age, but it’s very difficult to be as durable as Patty has been. It’s a long time. It’s pretty special,” said Logan Couture, Marleau’s San Jose Sharks teammate.

So the record is Marleau’s forever?

“Records are made to be broken, though. That’s the old saying, right?” Couture said. “So we’ll see.”

The NHL could see a few other big records fall over the next few seasons, depending on the pursuers’ durability, execution and — let’s face it — good fortune. Here are six of them, ranked by feasibility:

This is the big one. This is the MLB career home run record falling. This is LeBron James catching Kareem Abdul-Jabbar for most career points in the NBA. Wayne Gretzky’s 894 career goals in 1,487 games is not only the NHL’s most heralded record, but for many years its most seemingly unattainable one.

Jaromir Jagr (766 goals) might have caught him, were it not for work stoppages and a multiyear detour to the Kontinental Hockey League. Now, it’s Alex Ovechkin who has the inside track to top Gretzky as hockey’s greatest goal scorer of all time, with 730 through 1,194 games.

According to ESPN Stats & Information, Ovechkin will need 270 games to score another 165 goals to move ahead of Gretzky, if he scores at his current career goals-per-game pace (a shade above 0.61).

Ovechkin is 35 years old, but still scoring at an impressive clip of 0.58 goals per game over the past five seasons. Even if you drop that pace down to 0.50, to adjust for a potential drought, he would need another 330 games to catch the Great One.

The last two seasons being truncated due to the COVID-19 pandemic shortened the runway a bit for him, but Ovechkin remains a Russian Machine, missing only six games in the past five seasons.

There are three active coaches all chasing Scotty Bowman for the most career games coached in the NHL. Bowman finished with 2,141 games from 1967 to 2002 with St. Louis, Montreal, Buffalo, Pittsburgh and finally Detroit. He’s the only head coach in NHL history to stride behind the bench for over 2,000 games.

Florida Panthers coach Joel Quenneville, 62, appeared in his 1,751st career game on Monday night, ranking him second all time. New York Islanders coach Barry Trotz, 58, is right behind him at 1,719 games. Winnipeg Jets coach Paul Maurice ranks fourth with 1,645 career games, but he’s the youngest of the trio at 54.

Quenneville will finish the season at 1,761 games if the Panthers play all 56 contests. Assuming next season gets the NHL back to 82 games, that means he’d have to coach four complete seasons plus 52 more games to catch Bowman. Trotz will finish at 1,730 if the Islanders play all 56 contests, leaving him just over five seasons away from the record.

Game-winning goals are a bit of a specious statistic in hockey. Score the second goal in a 7-1 victory, and that player scored the “game winner.” But Jaromir Jagr’s 135 game-winning goals in 1,733 career games, the most in NHL history, are still a mighty achievement. That’s 14 more than Gordie Howe scored.

As with most goal-scoring records, this one is also threatened by Ovechkin. He’s 19 game winners behind Jagr, with 116 in just 1,194 career games. That includes his NHL-record 24 overtime goals. He’s got a shot at it.

From Oct. 8, 1975 to Oct. 10, 1987, Doug Jarvis played 964 consecutive games with the Montreal Canadiens, Washington Capitals and Hartford Whalers. But there are three current players putting together streaks that could threaten that mark.

All three would be in position to potentially break Jarvis’ record in an 82-game regular season in 2021-22. After that … well, 1,000 straight games played would be a heck of a thing, wouldn’t it?

Patrice Bergeron is one of the most decorated defensive players in NHL history. His run of nine straight nominations for the Selke Trophy, given to the league’s best defensive forward, is an NHL record.

Will the Professional Hockey Writers Association make this a coronation for our new Selke king?

If you prefer immediacy in your Alex Ovechkin NHL record-breaking, then this is your benchmark to watch.

Hockey Hall of Famer Dave Andreychuk holds the NHL record with 274 career power-play goals, amassed during 1,639 career games. The “Andy Spot” was right in front of the crease on the power play, collecting rebounds and tipping home shots better than anyone else, starting his career in the high-octane 1980s and playing through 2005-06.

The “Ovi Spot” is located at the top of the left circle on the power play, where the Capitals star has generated the majority of his 269 power-play goals. Right now, he’s six away from setting the record for career power-play goals, which honestly is just a good two weeks for Ovechkin.

So expect Andreychuk’s standard to be surpassed. As Couture said, records are made to be broken.