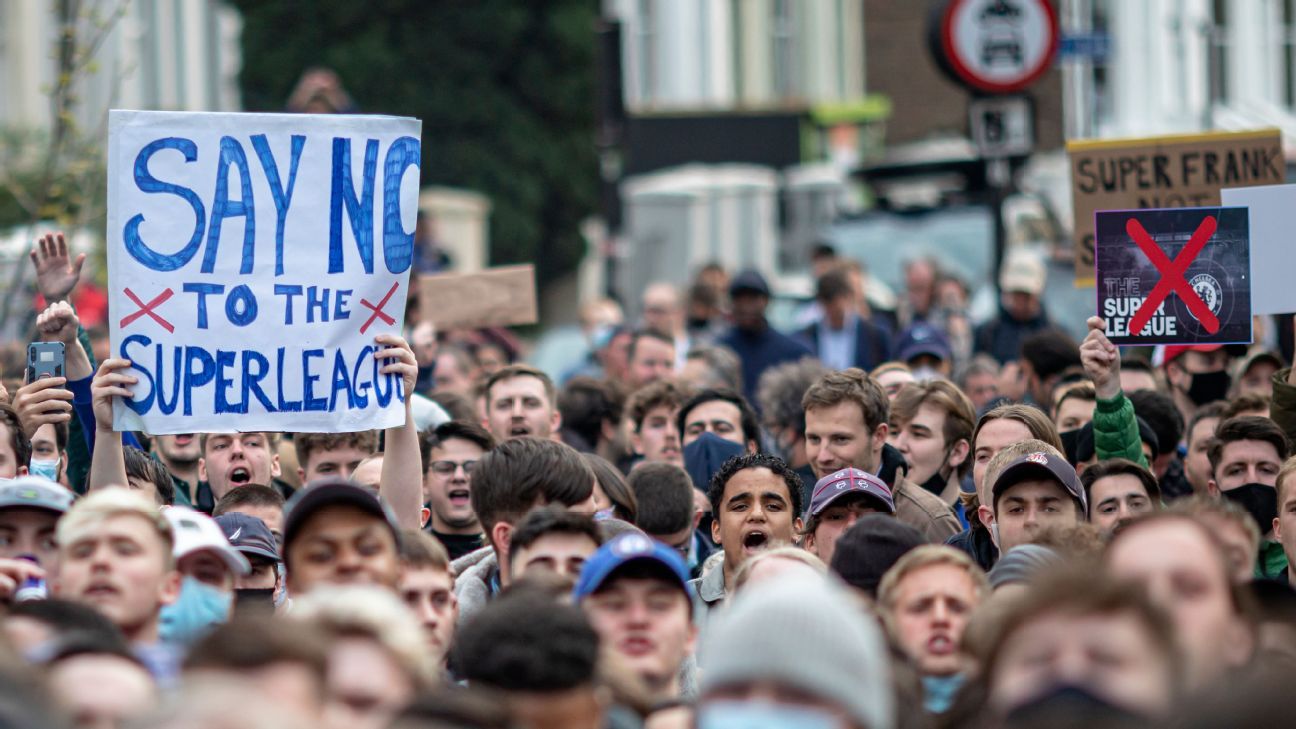 Manchester City, Liverpool, Manchester United and Arsenal, and Tottenham Hotspur will begin the process of pulling out of the proposed European Super League, the clubs confirmed on Tuesday.

Chelsea are also expected to exit the proposed league, sources confirmed to ESPN.

The reversal is a stunning U-turn for the English Premier League clubs after Sunday’s announcement that they were among 12 of Europe’s biggest football sides planning to break away from the UEFA Champions League.

Man City was the first of the clubs to announce, making a brief statement: “Manchester City Football Club can confirm that it has formally enacted the procedures to withdraw from the group developing plans for a European Super League.”

In their statement, Arsenal “apologised” to their supporters, adding: “It was never our intention to cause such distress, however when the invitation to join the Super League came, while knowing there were no guarantees, we did not want to be left behind to ensure we protected Arsenal and its future.”

Liverpool said its involvement in the three-day-old project “has been discontinued” while Manchester United said they withdraw from the deal. Tottenham also said they would not participate.

After Manchester City announced their exit, UEFA president Aleksander Ceferin said: “I am delighted to welcome [Manchester City] back to the European football family. They have shown great intelligence in listening to the many voices — most notably their fans.

“It takes courage to admit a mistake but I have never doubted that they had the ability and common sense to make that decision. City are a real asset for the game and I am delighted to be working with them for a better future for the European game.”

The Chelsea news was first reported by the BBC and confirmed by ESPN’s James Olley. The club has yet to make an official statement.

The Super League organisers, headed by Real Madrid president Florentino Perez, had said they hoped to add three more founding members before launching their competition “as soon as practicable.”

Perez, who was scheduled to appear on on Spanish radio program “El Larguero” on Cadena SER on Tuesday night, instead skipped the interview to attending to meetings relating to the proposed league, according to that show’s host Manu Carreno.

Before their scoreless draw with Brighton on Tuesday, a group of Chelsea players went to chairman Bruce Buck to say they were opposed to the proposed league, sources told Olley.

Several hundred fans gathered outside Stamford Bridge hours before kick-off to voice their opposition to the club’s plan to sign up to the new competition.

Technical and performance director Petr Cech was seen on camera pleading with supporters to let the team bus enter the ground as fans blocked their access to the stadium.

News then filtered through that the Blues were drawing up documentation to reverse their decision to join, prompting cheers and chants of “We’ve saved football” from the fans who had been moved around 300 yards away from the stadium’s main entrance point.

Earlier in the day the Premier League’s 14 other clubs met to discuss the crisis along with the Football Association.

The Premier League issued a statement on Tuesday saying it “unanimously and vigorously rejected” the plans and were considering action to bring the six clubs to account.

Meanwhile in Spain, Barcelona’s participation in a new league would be conditional on the Liga club’s members voting in favour of the proposal, according to ESPN Deportes and Spanish media reports.

Catalan television station TV3 reported that the contract Barca president Joan Laporta signed with the other 11 founding member clubs included a clause that allowed the club to back out of the agreement should its members not agree.

The report added Laporta met Barcelona manager Ronald Koeman on Tuesday to explain the club’s position on the Super League and has arranged to speak with club captains Lionel Messi, Gerard Pique, Sergio Busquets and Sergi Roberto on Wednesday.

Unlike the Champions League competition, where teams have to qualify through their domestic league, the founding Super League teams would guarantee themselves a place in the new competition every year.

UEFA has warned it may impose sanctions against clubs and players who take part in the breakaway competition, and also prompted statements of concern from public figures such as UK Prime Minister Boris Johnson, French president Emmanuel Macron, and Pope Francis.

UEFA had voted on Monday changes to the Champions League format by expanding it from 32 teams to 36 with the reshaped tournament, due to commence at the start of the 2024-25 season.

FIFA president Gianni Infantino told the 12 breakaway European Super League clubs on Tuesday that they could not be “half in, half out” of the established football system and must face up to the reality of their decision.

A number of top players under contract at those six Premier League clubs had raised concerns about UEFA’s threat to ban them from playing for their countries at international tournaments, including the 2022 World Cup in Qatar.

Reuters contributed to this report.