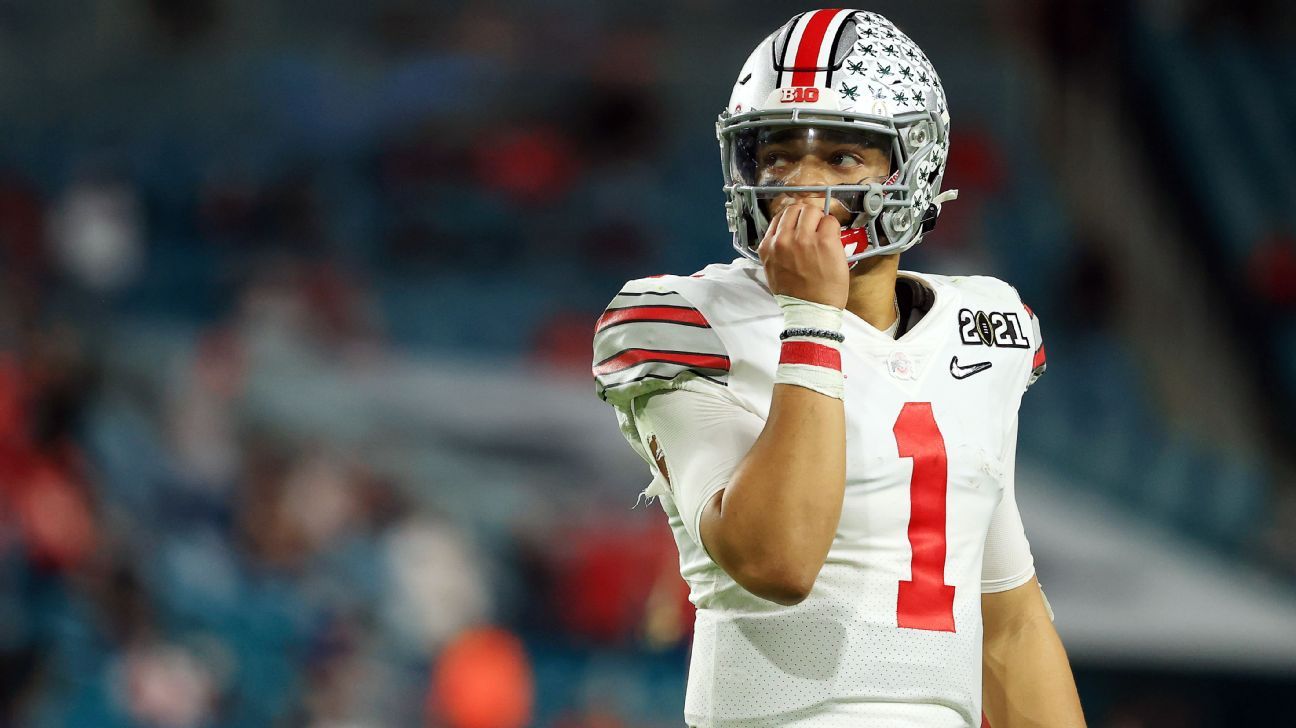 We’d know the contents of Marsellus Wallace’s briefcase in “Pulp Fiction” and whether Tony Soprano is alive while sitting on the beach near the lost city of Atlantis. If we were really lucky, we could finally get to the bottom of who, exactly, let the dogs out.

But none of that moves the needle like the 49ers’ quarterback quandary.

“We looked at it as to move up to three, we had to feel good that there’s three guys we’d be comfortable with leading our team for a long time and we couldn’t make that decision before there was three guys so we had to feel that way with three,” Niners coach Kyle Shanahan said on March 29. “I think there’s a chance to get there with four and five.”

One thing we know for sure is that this is the season of confirmation bias. Have an opinion about which quarterback you want the 49ers to take? Chances are, you’ll embrace any nugget that supports your choice and ignore anything to the contrary.

Is it possible the 49ers moved to three without a firm decision but knew they wanted to have time to finalize that choice? Sure, but they had to be convinced on three players to make such a bold trade. They could, as Shanahan said, still “get there” with a fourth and fifth quarterback, but that player would have to pass whoever was No. 3 at the time of the trade.

The question, then, is which of the quarterbacks — assuming Trevor Lawrence and Zach Wilson are the other two — will be third on the Niners’ list come draft night?

Relive the highlights from Justin Fields at Ohio State as the QB is poised to be a top draft pick in the NFL.

Some observers believe Shanahan is hopelessly devoted to immobile pocket quarterbacks who will robotically do everything he wants and nothing more. Shanahan has had success with those pocket quarterbacks, making the best of the hand he’s been dealt. But he hasn’t had a chance to select his own guy from a lofty draft perch.

Shanahan grew up watching his father, Mike, coach physically gifted quarterbacks such as John Elway and Steve Young. He also watched as Patrick Mahomes snatched Super Bowl LIV away from the 49ers in the closing minutes.

Does Shanahan want someone who can check the boxes of pre-snap ability, accuracy and decision-making? Of course. But that’s not all he wants.

“You want an elite player,” Shanahan said. “And, of course, if you can get a guy who’s elite with his arm and can play in the pocket and do everything and still run around and make off-schedule plays, I mean, that’s what you’ve seen with Mahomes. Everybody wants something like that.”

One option would be Fields. At 6-foot-3 and 228 pounds with a 4.44 40-yard dash, Fields is a dynamic athlete with elite accuracy to all levels and the decision-making to operate Shanahan’s offense at its base but also elevate it to the next level.

Some meaningful numbers on Fields, courtesy of ESPN Stats & Information:

Shanahan worked with Fields at the QB Collective camp for promising young quarterbacks when Fields was in high school. Fields has been working with former NFL quarterback John Beck, who played for Shanahan in Washington during 2010 and 2011 and the two remain close. In fact, Shanahan has been in contact with Beck throughout the pre-draft process as Beck has worked with Fields, Wilson and Lance.

None of that guarantees anything, but it does mean Shanahan has access to someone he trusts who has been around Fields often in the run up to the draft, no small thing given the remaining COVID-19-related restrictions on private workouts and prospect visits.

The case for Alabama’s Mac Jones

Check out highlights from Alabama QB Mac Jones’ college career ahead of the 2021 NFL draft.

In the same quote in which Shanahan talked about finding an elite quarterback, he expounded on the idea that he only wants pocket quarterbacks such as Kirk Cousins, the player he drafted in the fourth round as offensive coordinator of the Washington Football Team in 2012.

Part of why Shanahan liked Cousins so much was the value in finding a quarterback capable of doing things Shanahan cares most about so late in the draft. Shanahan prioritizes accuracy, pocket poise and decision-making above all else.

“If you can’t sit in that pocket and play that position, eventually it’s not going to matter,” Shanahan said. “They both go hand in hand.”

It’s no secret that Shanahan sought to bring Cousins to San Francisco in 2018. The Niners passed on Mahomes and Deshaun Watson in the 2017 draft in order to wait for Cousins. As it turned out, the opportunity to trade for Jimmy Garoppolo came first and the Niners took it. When Garoppolo played well over the final five games, the plan changed.

From California to New Hampshire, 43 states (and D.C.) have produced NFL quarterbacks. Take a deep dive into the data to see who’s the best, worst and everything in between. Story »
&#8226 See which NFL QBs come from your state »

All of that is necessary context to understand why Jones is in the mix for the Niners with the third pick. Jones has drawn comparisons to Cousins for his ability to diagnose coverages before the snap, his footwork and his accuracy. ESPN NFL analyst Matt Bowen says Jones “throws with anticipation, location and timing” and “he’s very good short to intermediate in terms of accuracy, putting the ball in location.”

Those are qualities that undoubtedly apply to the 49ers, who put a premium on that short to intermediate accuracy because of what it can do for their ability to gain yards after catch.

Some meaningful numbers on Jones:

While Shanahan went on to insist that Cousins isn’t his idealized version of a quarterback, he still acknowledged there’s a lot to like there.

“If you’re going to draw it up, you’re going to draw the biggest, fastest strongest and best quarterback in the pocket,” Shanahan said. “So, I think that’s pretty ridiculous to say that [about Cousins]. I’ll also tell you I love Kirk. I know I’m not allowed to talk about other players but Kirk’s a hell of a player and a lot of people would be lucky to have a quarterback like that.”

Relive some of the incredible plays from Trey Lance’s college career.

When Shanahan took over the 49ers in 2017, there was a chance that Buffalo Bills quarterback Josh Allen was going to enter the draft. There’s an alternate universe in which Allen declared and became a 49er. That didn’t happen, and Shanahan watched helplessly from the sideline last December as Allen shredded the 49ers to the tune of 375 yards and four touchdowns with an 80% completion rate in a 34-24 Buffalo win.

When Allen went through the draft process, he was regarded as a raw prospect from a smaller school with the physical tools to become a franchise quarterback. In Buffalo, Allen has done that, making progress every year before becoming an MVP candidate last season.

A day after the Niners lost to Allen and the Bills, Shanahan was asked if the way he evaluates quarterbacks has evolved.

“How I evaluate everything is always changing,” Shanahan said on Dec. 9. “You start to see you can win football games with any type of quarterback as long as they are good enough and you can be good enough in hundreds of different ways. … So, I evaluate quarterbacks in terms of trying to find people who can have a chance to be one of those elite-type guys and there’s lots of different ways to do it.”

Here’s what to expect at the NFL level from the top players at these positions:

If the Allen way of doing it is of particular interest to Shanahan, Lance could be the player he seeks. Much like Allen, Lance is a bit of an unknown after starting just 17 games at the FCS level and comes with questions about his ability to be consistently accurate. Also like Allen, the 6-4, 226-pound Lance boasts a powerful arm and the athleticism to rush for 1,100 yards and 14 touchdowns in 2019.

Some meaningful numbers on Lance:

Because of his lower level of competition, relative inexperience and accuracy questions, many view Lance as the guy in this class who most needs at least a year to sit and learn before playing. While that could be true, the amount of pre-snap responsibilities he had for the Bison and the type of offense he ran at North Dakota State suggests he could catch up quickly.

If he does need a year to sit, the Niners offer a desirable situation. Garoppolo or another veteran (if the Niners get a good offer for Garoppolo) can start before turning it over to the No. 3 pick in 2022. If it’s Lance, there are plenty of reasons to believe he has the potential to become the elite player Shanahan is hoping to find.