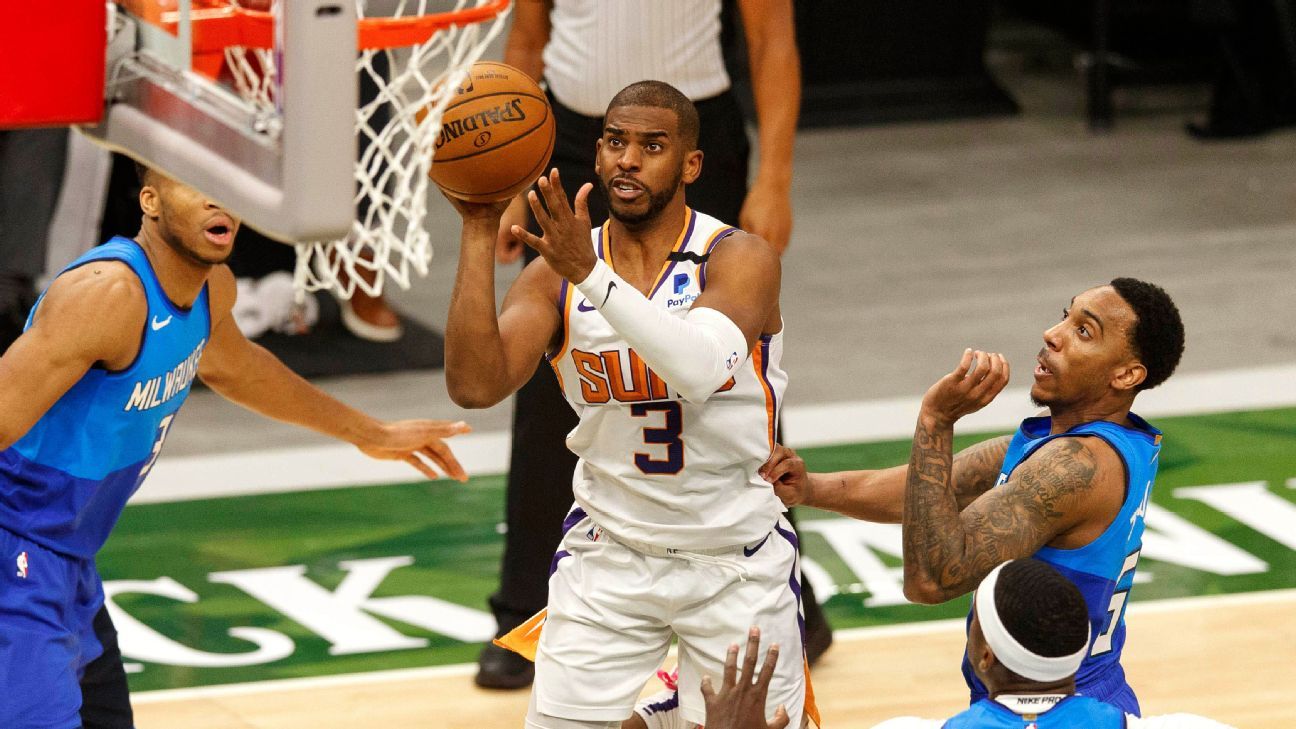 Right before Devin Booker stood up to finish his postgame videoconference Monday, he had one more thing he wanted to say. He first had to call for the ball.

Someone off camera flipped it over to him, and as Booker caught it, he unleashed a megawatt grin.

“Yessir, here it is, y’all!” he said, tucking the ball under his arm. “It’s going on Ebay for a million!”

The ball belonged to Chris Paul, presented to him in the locker room after the Phoenix Suns‘ 128-127 overtime win over the Milwaukee Bucks in which he passed NBA icon Magic Johnson for fifth on the all-time assists list. Booker, who was on the other end of the milestone assist with a dunk, then handed the ball back to Paul. And Paul said he had somewhere in mind he wanted to send it.

“First thing I’m going to do is send this ball to Magic and see if he’ll sign it for me,” Paul said.

It was a night of celebration and reflection for the Suns, with Paul’s personal achievement punctuating one of the team’s biggest collective nights of the season. The win in Milwaukee wasn’t only one of the best games of the NBA season, it also provided the kind of affirmation young, up-and-coming teams crave.

“It was everything that the playoffs are,” Suns coach Monty Williams said. “Emotion. Physical. Players making plays. Late-game situations. It was all of that. The resiliency and relentless attitude we showed down the stretch, on the road, in overtime, says a lot about the character of the guys in our locker room.”

The Suns rocked the bubble in Orlando last summer with their 8-0 run, setting the table for a promising season to come. There was a renewed culture under Williams, with a focus on development, details and defense. Suddenly, the Suns had some expectations.

Then they added Paul.

“I don’t have enough time to talk about everything he’s done,” Williams said. “He’s brought such a — he’s improved the winning mentality. All of our guys want to win. But when you see a guy that has done it from afar and then you look at how he does it, from his diet to the exercise routine he has every day, and then in game when he’s able to be in those situations and really lift the level of our team, it’s pretty cool to watch.”

The bubble darling phase is over, though. You get the feeling the Suns are a little tired of talking about it. They had a nice run last summer in the Orlando, Florida, restart. They were good then. They think they can be great now.

“Yep,” Booker said bluntly when asked if this is what he envisioned after Phoenix added Paul. “Straight up.”

Paul has a long track record of leadership. His skill set extends beyond the floor, with his cerebral approach to the game and ability to communicate to teammates and force accountability. These things are known. But he had to reclaim his reputation with the Oklahoma City Thunder last season, improbably leading them to a 5-seed in the West, and with the Thunder ready to embark on a rebuild, Paul identified the Suns as the next team he could elevate.

“I could sit here all day and give you story after story,” Williams said of Paul’s impact. “He certainly helps me as a coach. Our conversations in game allow us to make some plays that we probably couldn’t make if I didn’t have that synergy with him.”

Paul is the steady beat to the Suns, the metronome that ticks along to maintain consistency. Young teams can ride the wave of a season or even of a game, flustering over losing streaks, drama or deficits. Paul rarely gets rattled and is the weighted blanket to every stress point. Whether it’s a soothing midrange jumper to stop a run, or drawing a foul to stem momentum, or pulling Booker aside for some quick, on-the-fly mentoring, as he did Monday after the Bucks’ Khris Middleton drilled a late tying 3 in his face, Paul picks his spots.

“Paying attention to detail. Approaching the game the right way. Seeing the little things and just thinking ahead,” the Suns’ Deandre Ayton said. “Not thinking like a normal basketball player, but thinking ahead and knowing what teams’ tendencies are and how we can get better, how else we can tweak an offense or a defense. Calling things out early. Just being aware of any little thing.”

“He really brings the best out of people,” Ayton added. “He wants the best for you, and he’s going to talk to you, teach you. And it’s just about how much of a player you are to be bought in to help the team.”

It’s moments like Paul passing Magic that hammer home the reverence and respect he commands in Phoenix’s young locker room. He’s a Hall of Famer in waiting, and every player on the team knows it. That kind of intangible impact is the sort of lead-by-example thing that only comes with a list of career achievements like the one Paul has compiled.

“I’m inspired every day. I tell Chris that every day. It’s not something I’m going to take for granted,” Booker said. “I pick his brain. I listen to him — closely. I watch how he moves, and even when he’s not talking or leading us, I just watch how he goes about his business. There’s so much respect for him and not just from me, but leaguewide and worldwide.”

Said Ayton: “The man has proven he’s the ‘Point God’ every time he plays. Breaking milestones and stuff like this, accolades, it’s an honor to be part of it. I dapped him up after he got the game ball and we all celebrated, and I was like, ‘I appreciate you, man. I’m really honored to be part of this. This is crazy.’

“It’s another thing to win games, but when you actually see the footsteps you want to add, or the type of respect you want to get around the league and you’re around that person every day, it’s a different feeling. You want to play harder. Because that person is doing the same thing you’re doing every day to stay on top of his game and help the team win, doing everything he can.”

Back in January, after the Suns lost three straight to fall back to .500, there was frustration in the locker room. Paul stopped short of saying the team wasn’t good enough, instead saying they weren’t playing well enough. But the message was clear: He expected more out of them, and he was going to do everything he could to bring it out.

Now, almost three months later, the Suns are 1½ games back of the Utah Jazz for the top seed in the West after taking down a title contender on the road in a high-level back-and-forth game.

It’s hard to claim statement wins, particularly in this weird 72-game season, but for a team like the Suns, each win over a contending peer serves as a certain kind of validation. The abrupt jump from bubble Cinderella to an apparent title contender leaves doubters aplenty. There’s always an air of “the Suns are a nice story, but …” around them.

“I knew this about our team but, how do I say it?” Williams said. “It’s just good to see it play out in front of everybody else.”

Toward the end of his media availability Monday, Paul was asked about Ayton’s solid defensive effort on Bucks star Giannis Antetokounmpo, and while praising the young center, Paul mentioned the unique game plan the Suns had to deploy for Antetokounmpo. But there was a casual line he added, maybe subconsciously, maybe coincidentally, or maybe, intentionally.

“These games right here, we’re in the West, they’re in the East,” Paul said casually. “The only time we could see them again is in the Finals.”