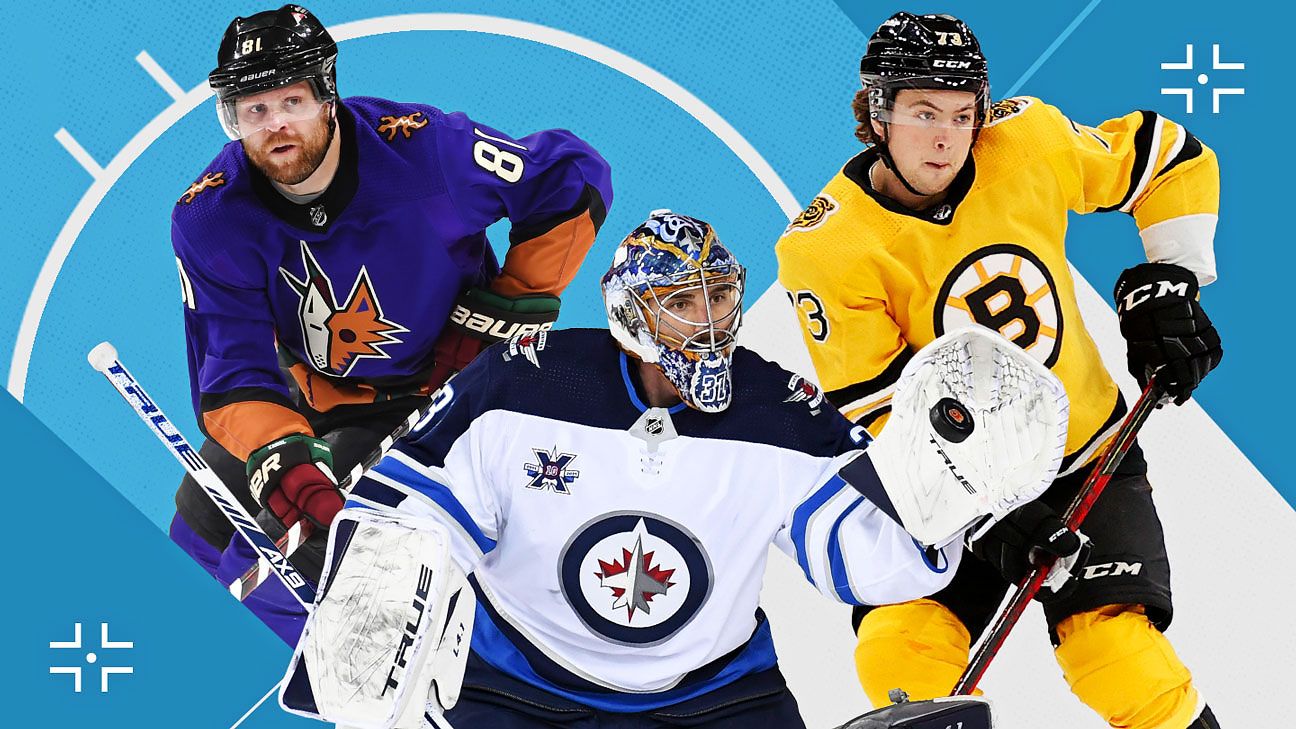 Believe it or not, some NHL teams have a single-digit number of games remaining on the 2021 schedule, though many playoff positions and seedings still have to sort themselves out.

For this week’s NHL Power Rankings, we identified the toughest stretch of games remaining for every team.

Note: Previous ranking for each team refers to our Week 13 edition, published on April 14. Points percentages are through the games of April 20.

A two-game set against the Avalanche (April 26 and 28 in Vegas) could determine the winner of the West. Fittingly, the top two teams in the division have split their six games against each other so far.

When the Avalanche resume play after their COVID-19 pause, they’ll face St. Louis twice at home, before traveling to the Golden Knights for two games that could determine first place in the West Division.

The toughest remaining stretch for the Hurricanes? You’re looking at it. The Canes are on a six-game, eight-day road swing that has taken them from Tampa Bay to Florida. It ends with a back-to-back in Dallas.

The only teams to post a .500 record or better against the Lightning this season are Columbus and Florida (both .500). Tampa Bay finishes out the season at the Panthers with a two-game road set, which should be a good one.

The Maple Leafs have been in control of the North Division, with the Jets as their closest challenger. Toronto plays Winnipeg three more times — all on the road — including two games this week.

The Canes have been a sore spot for Florida this season. The Panthers are 1-3-2 against Carolina and have seen their former player, Vincent Trocheck, score six goals in those six games. Carolina and Florida play twice more: on April 22 and 24.

The Caps are trying to stave off the Islanders for the top seed in the East. Washington will cement its spot or fall behind following a three-game set against the Islanders beginning tomorrow, with two games at the Coliseum.

The Isles are eyeing the top seed in the East, but they have to pass Washington. New York gets a prime opportunity with three games against the Caps from April 22 to April 27. It’s always interesting when Barry Trotz faces his former team.

The Wild are pretty firm in their playoff position. However, they’ll face a desperate team in St. Louis — on the outside, looking in — for four consecutive games from April 26 to May 1. That could be a feisty series.

Seeding in the East is still up in the air, and the Pens can help (or hurt) their cause with a critical four-game stretch beginning April 25: two games against the Bruins, followed by two games in Washington.

For the Bruins, the last two games of the season could be vital. Boston hosts the Islanders on May 10 — a team against which it has gone 2-3 — then must travel to Washington for a game against the Capitals the next day.

The Rangers have been on a tear since March 30, picking up more wins than any other team (18) while averaging four goals per game. Their playoff hopes might come down to the final two tests of the season: a pair of road games in Boston.

The Oilers have fared well against the Jets so far, going 5-2. That said, Edmonton’s final two games against Winnipeg — on April 26 and 28, in Winnipeg — are critical. The Oilers will likely face the Jets in the first round of the playoffs, and these games could determine seeding.

Fourth place in the Central Division is on the line this week versus Chicago, but Nashville’s toughest stretch is its final two games against Carolina to close out the season. The Preds are 0-5-1 against the Canes so far.

In the last week of the season, the Canadiens will have a two-game road swing against the Maple Leafs. It will be especially important for Montreal, considering the Habs are likely to play the Leafs again in the first round of the playoffs.

Next week, the Stars have a daunting stretch of three games in four days. First, it’s a back-to-back against the Canes (against whom Dallas has gone 1-3), followed by a game at the Lightning (against whom they also have a 1-3 record, not to mention they’re the team that ousted them in last year’s Stanley Cup Final).

The Yotes are clinging to the final playoff spot in the West. In a four-game stretch from April 26 to May 1, Arizona faces a team (San Jose) hunting for its spot for two games, then takes on Vegas for the others. The Golden Knights have gone 5-1 against the Coyotes so far.

The Blues’ season could be defined by the stretch on which they’re about to embark: two games against the Avs, followed by four straight games against Minnesota. Can they pull it together, or will it all unravel?

During the last week of a frustrating season for Philadelphia, the Flyers will face the Capitals twice, with both games in Washington. The Flyers have faced the Caps six times this season and have won only once.

The Blackhawks are still aiming for the fourth playoff spot in the Central, and to get it, they’ll need to unseat Nashville. Chicago gets its chance with a game against the Predators on Wednesday night and then again on Friday.

Frankly, the entire final portion of the Canucks’ season is brutal, following a COVID-19 outbreak that forced a 25-day pause. Vancouver is playing its final 19 games in 31 days, and that includes five sets of back-to-backs.

The Flames’ final four games are all against the Canucks — home, away, away, home — and it could be brutal for both teams, considering both are likely to be out of playoff contention by then.

If San Jose has any shot at unseating Arizona for the fourth playoff spot in the West, the Sharks have to post a winning record in the four remaining games against the Yotes (San Jose is 0-3-1 so far). The first two of those games are April 26 and 28.

While the Kings are now a long shot for the playoffs, they’ll face a tough stretch beginning on May 3, with a pair of games against the Coyotes (likely fighting for their playoff lives), followed by two games against the Avs.

Detroit is in the middle of a four-game stretch versus Dallas, a team against which the Red Wings have averaged fewer than two goals a game this season. A positive: Detroit recently posted its first three-game winning streak.

The current road trip the Blue Jackets are on is brutal. After hitting up the Stars and Panthers, Columbus now has a two-game set against Tampa Bay before the team is mercifully allowed to return home.

The Senators’ final road trip: at Winnipeg on May 8, at Calgary on May 9. Our last glimpse of the Tkachuk vs. Tkachuk showdown this season. Ottawa’s Brady and Calgary’s Matthew are the only players to lead their teams in both shots and hits this season.

After playing four straight games against the Kings (with pride on the line), Anaheim closes out its season with a daunting six-day road trip featuring two games in St. Louis and two in Minnesota.

The Sabres have yet to win a game this season against either the Bruins or Islanders. Buffalo faces Boston and New York in a four-games-in-six-days stretch from April 29 to May 4.

The entire rest of the schedule is a doozy for the Devils, who have been sluggish since trading away several players at the deadline. New Jersey has won just one game since March 30.