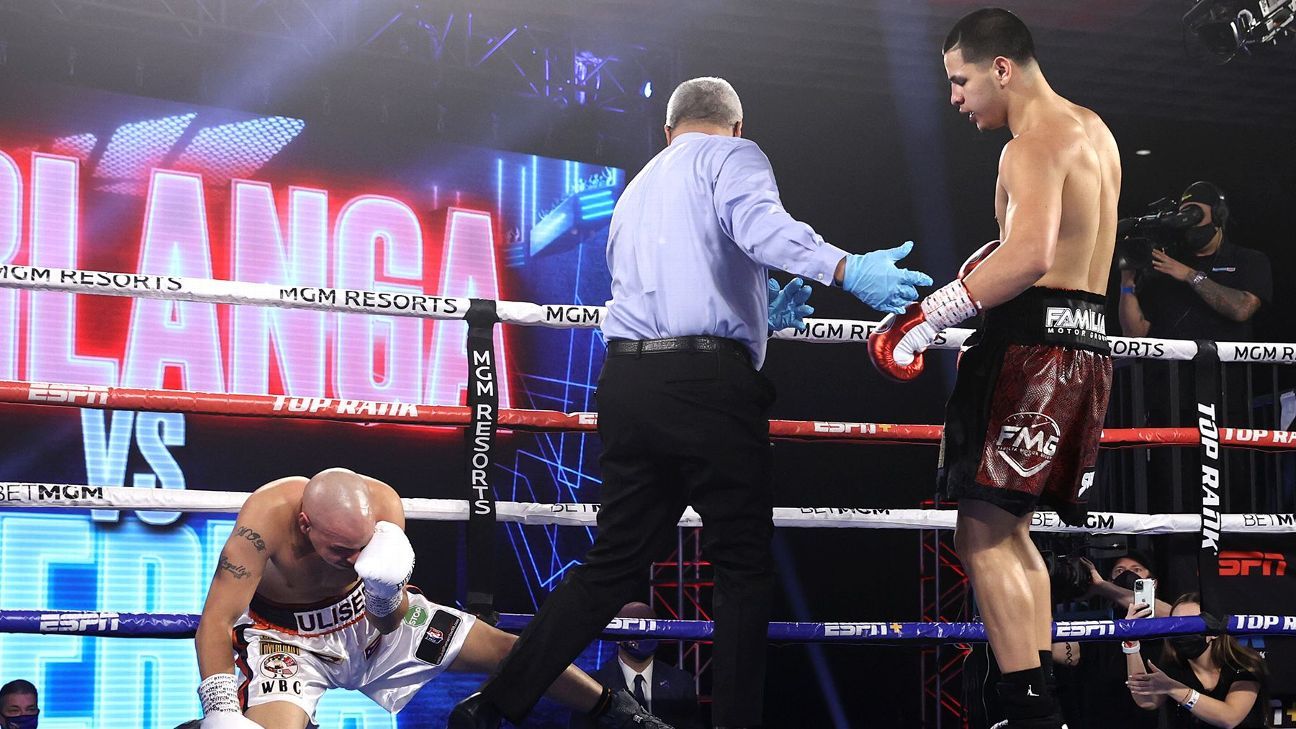 There’s something that has not been seen in any of Edgar Berlanga’s 16 professional fights: Round 2.

Berlanga, who defeated Ulises Sierra on Saturday on the undercard of Shakur Stevenson vs. Toka Kahn Clary at the MGM Grand Conference Center in Las Vegas, was impressive in his few minutes of work.

“When we say the phrase ‘heavy hands,’ Exhibit A is Edgar Berlanga,” Joe Tessitore said immediately following the knockout.

Berlanga swears he isn’t trying to force his knockout streak or even score stoppage victories. He insists that he is more than just raw power.

“I’m a precise fighter. I don’t throw the kitchen sink,” he said. “I’ve got a lot of skills, I’ve got poise, and I’m very precise in my shots.”

It remains to be seen just how complete a skill set he possesses. For now, the 23-year-old super middleweight is chasing the late Ali Raymi’s record of 21 consecutive first-round KOs to start a pro career. Tyrone Brunson did it in 19 consecutive fights, and the late Edwin Valero is third on the list, with 18.

As Berlanga celebrated his 16th victory, he added to his recollections of what he remembers from each of his 16 appearances.

Editor’s note: Responses have been edited for clarity.

“There was actually a big, big carnival over there around that time. So there were a lot of fans that were there and stuff. It was crazy — crazy adrenaline rush for my first fight as a pro. It was amazing.

“So obviously, it was my first fight with no headgear, and when I knocked him out, it was like, ‘What the f—?’ It just happened so fast. I threw a 2-3 [right hand-left hook], and he dropped on the floor. I was like, ‘Damn.’ I just walked away, and they called it right away, and I’m like, ‘Oh s—!’ I didn’t think it was going to happen that fast.”

“So the first 10 seconds of that fight, I land a right hand, hook, and I dropped him right on his bum.”

“He almost took me to the second round. I think it was the only fight I almost went the three minutes. It was cool. I knew I was hurting him. I thought I’d have to get him in the second, but I started connecting with crazy shots on him, and I saw it on his face that he wasn’t liking it, and I was hurting him.

“Then I landed that right hand, right on his chin, and I put him out. There were a lot of Mexicans over there rooting for him, but they loved me.”

“That dude was talking so much crap, like, before the fight. He was DM’ing me on Instagram, on Facebook, and he made a big show at the weigh-in, too. He, like, jumped on the scale with all his clothes on and his shoes. My people wanted me to beat him up — his team, everything. It was easy work.”

“That one was dope. That was actually my debut in New York. I had the casino jumping for that fight. And that guy, he did, like, a whole thing, too. We had a tussle at the weigh-in, pushing and going back and forth. It spiked up the fight even more, and that fight, it actually went viral.

“He threw a jab, I slipped it, and I shot a right hand. I hit him in his temple — and he flew out the ring. I knocked him out cold in 40 seconds. They took him out in a stretcher and everything.”

“He fought champions like Gilberto Ramirez. He fought Spike O’ Sullivan. He fought Esquiva Falcao, a couple of guys like that, and went the distance. He went rounds with them. Me, I just felt I made a statement with that fight.

“I just wiped him out quick in the first round. I hurt him bad, too, with a body shot.”

“He’s a guy that fought both of the Castano brothers [Brian and Alan, losing eight-round decisions to both]. Months before that fight, I was in Mexico, and I saw him go to war with Erickson Lubin in the gym. He did, like, 10 rounds with Erickson. I said, ‘He’s tough.’ So then I got the fight. I thought, ‘This guy will give me rounds. This is going to be a pretty good fight, man.’

“And I knocked him out. I like that one because that was on Puerto Rican Day parade weekend in New York.”

“He was a runner. He was just running the whole fight. I hunted him down. I just pressured him and hit him in the body a lot. I wasn’t going crazy. I just did it so smooth. We got it into a tussle, and when we broke off, I hit him with a hook — boom!

“That’s when I stunned him, bad. And he started running, and I cut the ring off, and I kept cutting the ring off behind my jab, and I hit him in the body.”

“It was cool. I was just getting my feet wet and everything with Top Rank. I didn’t fight for, like, seven or eight months. But I wasn’t nervous at all. Brad Goodman, Top Rank’s matchmaker, asked me if I was nervous. I said, ‘Not at all.’ I was excited. It was my first fight on TV, too. So I’m like, ‘S—, I’m excited.’ I just had a point to prove.”

“That was a cool fight, too. It was all right. I swung on him with, like, a four-punch combination. That was crazy.”

“To be honest, that whole first round, I connected with so many shots, but I remember I hit him with a body shot and a hook on top, and I stumbled him bad. He had his hands up, and the ref just stepped in and called it off.”

“I really, really thought he was going to take me a couple of rounds because he just fought the guy that fought Caleb Plant [Vincent Feigenbutz], and he went eight rounds with him. A lot of people thought he’d take me four, five rounds. He was talking crap at the weigh-in and stuff. His coach, he was, like, saying, ‘Oh, we’re going to see. He’s a big baby.’ My dad was like, ‘Yeah, you’re going to see.’

“A lot of people that never got hit before, they talk a lot of crap. They get punched in the face, then they understand. So when I stopped his fighter, the coach, when we were in the back, he grabbed my hand and goes, ‘What’s in these?’

“It was another step-up fight for me. We prepared to go rounds, but I got him hurt and got him out of there.”

“I still have so much room to grow as a fighter. The power is there, but I will show everyone that I am a well-rounded fighter. The knockout streak is cool, but there is more to me than first-round knockouts.”

Bellows had never been stopped before, let alone in the first round. But in just 79 seconds — less than he’s averaged across 15 first-round KOs — Berlanga changed that in a hurry.

“I already saw with the first shot that I cut him open, and the look in his eyes, he didn’t want to be in there from the beginning, once I got in the ring. … So I had to get him out.”

Berlanga still squeezed in a few pushups, which he said was a punishment for not doing what he and his coaches had worked on in the back before the fight.

“We were working on a combination in the back — it was a stepover, shoot the right hand over and a left uppercut, pivot, and a short left hook. I didn’t do none of that, so I had to pay [with pushups].”

The talk heading into Berlanga’s 16th fight was that Sierra wasn’t like any of Berlanga’s other opponents. Not only had Sierra never been stopped, he’d been in camp with Canelo Alvarez, Andre Ward and many other top-tier boxers. He was a reliable sparring partner as they prepared, and Ward even said he was a guy who was there to the finish — meaning he was always tough.

Berlanga knocked Sierra down three times, pressuring his opponent and capitalizing when he was hurt.

Now Berlanga turns to 2021, and he wants one thing: rounds.

“The better competition, the better opposition to fight, I believe I’ll be able to get those rounds in,” he said. “We ended 2020 with a bang. That’s what I wanted. 2021 is a big year for us. I’m looking forward to it.”

How will Berlanga react when he hears the bell for the second round of a fight? What happens when he gets extended a bit?

“I think I’ll skyrocket as I go two, three rounds,” he said. “Everyone’s going to see my skills.”

Berlanga said he regularly goes long distances in the gym with title contender Sergiy Derevyanchenko. He believes he has a wide variety of tools that go far beyond the ability to punch. He wants the opportunity to go at least a few rounds in real fights to show his overall talent, but he has no intention of carrying an opponent for the sake of lengthening a bout.

Goodman also said he believes that once Berlanga starts to get extended a bit, fights might become easier for him.

Berlanga’s team, which includes the trio of Andre Rozier, Terrence Simpson and Lenny Wilson, is looking for an expanded showcase — but for a different reason. “I don’t want him to get into the realm of just being the puncher, where you can punch, and it’s the only thing you can do to be successful,” Rozier said.

Berlanga’s manager, Keith Connolly, said he’ll be taking 10-round bouts in 2021. Berlanga doesn’t care about the scheduled length. He just wants to be a star.