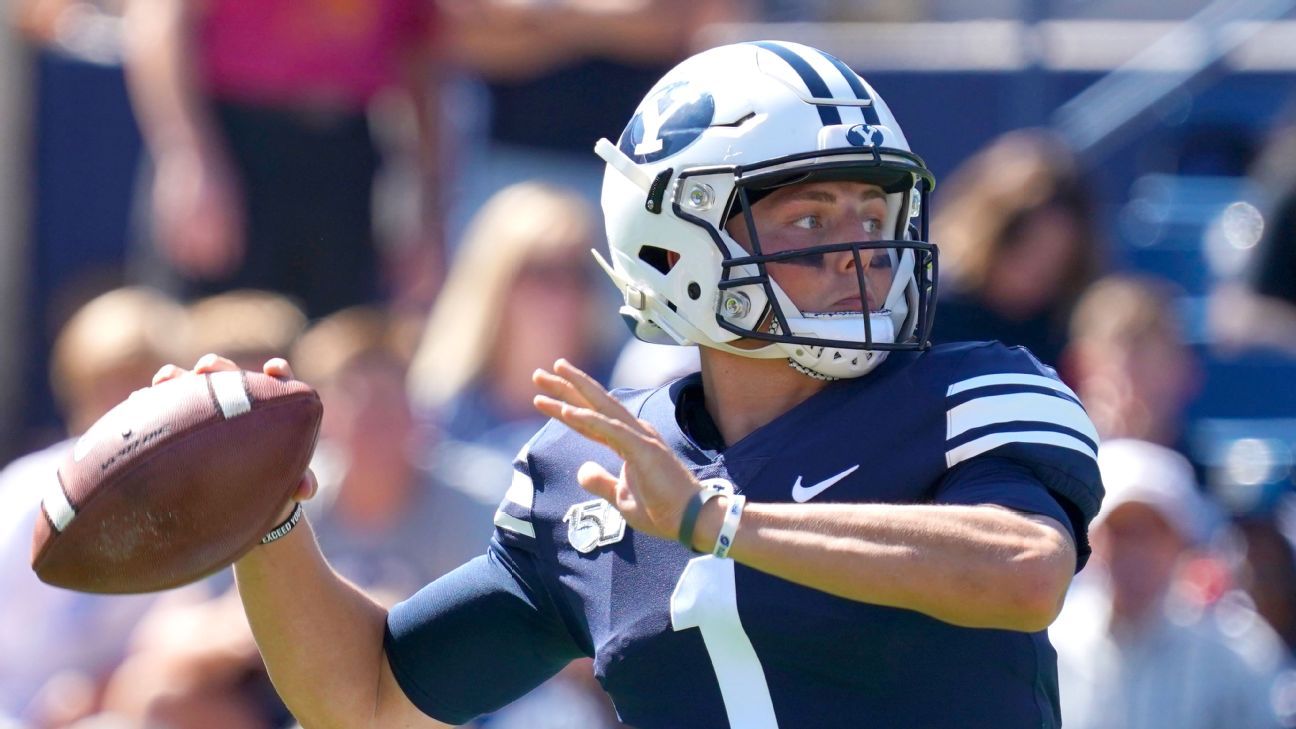 The 2021 NFL draft is right around the corner and is filled with several headliners who have lived up to their great promise.

While a lot of the Day 1 selections will be former five-stars and highly recruited prospects like Clemson QB Trevor Lawrence, there will be ample picks who were less heralded with intriguing storylines, like FCS QB Trey Lance.

Grade 78 is on the high end of our three-star scale, which reflected Wilson’s level of recruitment fairly accurately. He was recruited by Boise State, California, Iowa, Minnesota, Oregon State, Syracuse, Utah State, Hawaii, Fresno State, Nevada, Rice, Idaho, Weber State and Colorado State, so while he was a high-profile player on the West Coast, he was not as physically advanced in high school as he became over the course of 30 starts in Provo.

It’s not often a true freshman starts for BYU as opposed to redshirting and taking a mission deferment prior to returning to campus and resuming his football career. Early on, he battled injuries that impeded his development as a freshman and sophomore.

But once fully healthy, Wilson proved to be a special talent who wasn’t even being talked about as a Day 1 NFL draft pick prior to the 2020 season. He never threw double-digit interceptions in three seasons under center.

Initially projected as a guard due to his height (6-foot-3) and light weight (267 pounds) at the time he graduated, Slater arrived on campus in 2017 and started 12 games at right tackle. He would go on to start 26 games at right tackle before switching to left tackle in 2019, where he posted an exceptional season: allowing one QB hit, zero sacks and five QB hurries, totaling just six QB pressures in 11 games for the Wildcats.

Slater entered the 2020 season as Pro Football Focus’ highest-rated returning offensive tackle in the Big Ten. After gaining almost 40 pounds since high school, Slater developed into one of the most dominant running game tackles in college football over his last two seasons in Evanston.

Relive some of the incredible plays from Trey Lance’s college career.

As a high school senior in Minnesota, Lance was overlooked despite being every bit as productive on defense as he was at quarterback. Lance recorded 54 tackles and three interceptions as a senior safety, but his numbers under center were not eye-popping. He recorded 24 total touchdowns on offense but only threw for just over 1,300 yards and rushed for over 600.

The bottom line is everyone missed, likely because other prospects on Group of 5 and Power 5 boards featured players more statistically advanced and outside of Minnesota. Lance dressed for 15 games in 2018, appearing in two games before redshirting.

Lance’s coming-out party came in 2019, when he led North Dakota State to the first 16-0 undefeated season in college football since 1894 on his way to winning just about every postseason award imaginable. Perhaps his most impressive accomplishment was setting the NCAA all-divisions record for most attempts without an interception (287).

Darrisaw is the quintessential late bloomer. He was an extremely raw player with great size who would eventually develop into a dominant force. A 2017 class graduate, Darrisaw needed to attend prep school at Fork Union Military Academy prior to enrolling at Virginia Tech.

He became an immediate starter at tackle for the Hokies as a freshman in 2018 and eventually earned first-team All-ACC honors in 2019, as well as appearing on multiple All-America lists.

His decision to not opt out of the 2020 college football season allowed for nine more starts and significantly enhanced his draft profile this offseason. He started 35 games in three seasons for the Hokies and developed into one of the most versatile and mobile tackles in college football.

Jenkins was the prototypical Oklahoma State recruit: sign, redshirt, develop and play for a minimum of four years. In Jenkins’ case, it was five years.

The 2016 class graduate saw his first action and first start in 2017 playing both tackle and guard. His positional versatility over the course of his career and number of starts gave him huge value. He can play on either side at right or left tackle, as well as guard.

Jenkins played both basketball and baseball in high school with tremendous length, eventually coming into his own with added functional strength and mass while at Oklahoma State. He was a late bloomer physically and with his technical skills.

Rousseau was one of the more intriguing prospects to come out of the 2018 class, as he projected on defense but was also an all-state wide receiver coming out of high school. Furthermore, at 6-foot-6, Rousseau weighed only 209 pounds before blossoming into a 265-pound defensive stalwart for the Hurricanes in 2019.

He had a breakout season and was named first-team All-ACC and defensive rookie of the year after appearing in all 13 games, though starting only seven. So much of Rousseau’s development revolved around physical enhancement in the weight room. Simply put, he needed to get bigger and stronger to become an every-down contributor and eventual difference-maker. He recorded 54 tackles, 19.5 for a loss and 15.5 sacks in 2019 alone. His sample size was limited, but production was sound.