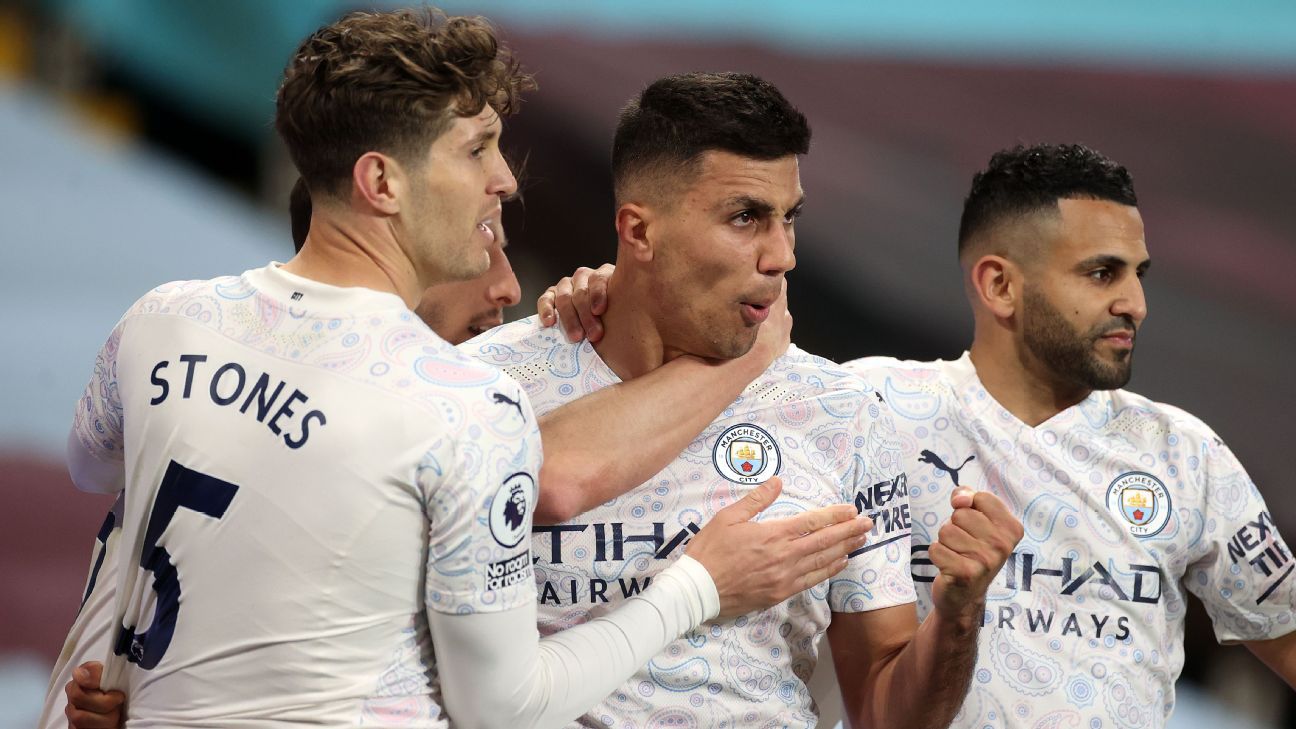 BIRMINGHAM, England — Without their best player, conceding after 21 seconds and having a man sent off in the first half, Manchester City could have ignited a title race at Villa Park on Wednesday night. Instead, Pep Guardiola’s side beat Aston Villa 2-1 and showed why they deserve to be champions.

Another eight points from their final five games will seal it regardless of what Manchester United can do between now and the end of the season. On this evidence, they will be worthy winners.

With slick football, goals and incident, it was a game that might even have been exciting enough for Florentino Perez. Who needs the Super League when the Premier League can offer up entertainment like this?

Despite City’s spectacular U-turn and an apology from CEO Ferran Soriano before kickoff, there were still scattered protests outside the stadium, although nothing like the anger on show at Chelsea 24 hours earlier. One banner read: “We won’t forget,” and Guardiola is unlikely to forget his latest trip to Villa Park.

Forced to travel without Kevin De Bruyne because of an ankle injury, he watched John McGinn score before 30 seconds were on the clock. Goals from Phil Foden, excellent all night, and Rodri put City back in control only for John Stones to see red late in the first half for recklessly thundering into Jacob Ramsey on the halfway line.

Referee Peter Bankes first thought the challenge warranted only yellow before VAR Jarred Gillett recommended a trip to the pitchside monitor. Bankes didn’t need any help to send off Matty Cash after an hour for two ill-judged challenges on Foden in the space of three minutes. It might have been different had it stayed 10 vs. 11 for longer.

Foden’s goal — a fizzing move that started with a thumping pass from Ederson — was the highlight, but most impressive was City’s control in the second half when it would have been easy to panic against the pace of McGinn and Ollie Watkins on the break. The celebrations at the final whistle gave away what an important win Guardiola and his staff think it could be.

“We played so good,” said Guardiola. “After 10 against 11 and after Cash was sent off, it was a really good performance. The Premier League is the most important title to win.

“We controlled the game when it was 10 against 10. We did a good game. We showed incredible personality and a hugely important victory for us. We are so close. It’s in our hands, five games left. Two victories and one draw and we are close.

“It would have been dangerous if we’d lost, United in top form, but we deserve it for what we’ve done this season. We have this advantage. When it comes to the last five games we know exactly what we need — to play like today.”

Such has been City’s gliding superiority for much of the season, there haven’t been many tests of character, but this was one.

Defeat to Leeds handed United the chance to close to within eights points, while the FA Cup exit to Chelsea on Saturday ended any hopes of the Quadruple. On top of that, they have been under siege for the best part of 48 hours after their decision to join the European Super League was made public on Sunday night. At his pre-match news conference on Tuesday — hours before City pulled out — Guardiola was forced to answer questions about whether his players had been distracted by the furor surrounding the proposals. They replied in the best possible way.

Asked afterwards about City’s performance, McGinn described the visitors as “a nightmare.”

“Conceding an early goal and having to carry on after the Chelsea game, we have five games left to play but with the character of our players we are sure we can do it,” said Fernandinho, who only came on in stoppage time but was put forward for the post-match interviews in anticipation of questions about the Super League. “It’s been crazy but we’re happy now because football wins. I’m pleased for the team, the players and everyone at the club because we have fought a lot to reach this point, in every training session, and we are so close, we just need to focus and concentrate. Five games left and we’ll see what happens.”

It’s now 10 successive away victories in the Premier League and 17 straight away wins in all competitions. It’s a record that bodes well ahead of their Champions League semifinal first leg against Paris Saint-Germain in the French capital in a week’s time.

The only problem for Guardiola is a worrying habit of going a goal down. McGinn’s goal was the fourth time in as many games that they have conceded first, and it’s now five games without a clean sheet after keeping four in a row. As an added complication, Stones will now miss Sunday’s Carabao Cup final against Tottenham Hotspur at Wembley, but against Aston Villa, City showed they are more than capable of dealing with adversity.