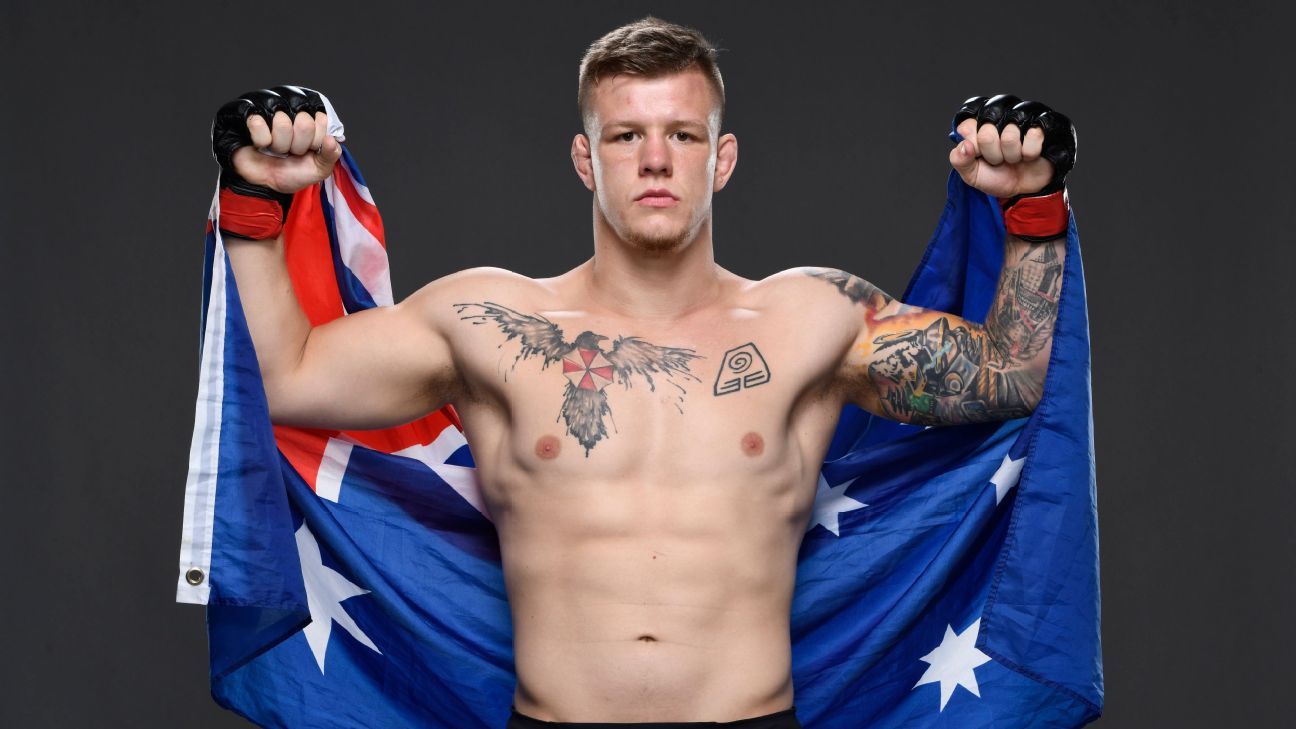 Australian Jimmy Crute is in little doubt where he’ll be this time next year.

Some might call it confidence, others cockiness, but the outside noise matters little to a bloke who spent much of 2020 alone with his thoughts. Alone with his thoughts and dog, Buddha, in the back of a van, plotting the route to becoming the UFC’s light heavyweight champion by the time 2022 rounds its halfway mark.

“I’ll be the No. 1 contender by the end of this year and world champion by mid next year,” Crute told ESPN on the beach on Melbourne’s outskirts ahead of his UFC 261 showdown with Anthony Smith, Buddha laying on the sand beside him.

To understand Crute’s psyche and the dedication to his craft you have only to go back to last year when both out of necessity and desire, he packed up whatever he could fit into his van drove to the parking lot of his gym, and stayed there to ride out Victoria’s multiple lockdowns amid the coronavirus pandemic.

“It was a really cool experience but it would have been better if I didn’t do it in a carpark; van life is at its best when you can wake up at beautiful beaches, waterfalls and all that. But when you’re stuck in the one spot for work, it gets old pretty quick. I’m so glad I did it and you never know when I retire I might deck out a proper one and do fulltime van life for a few years. We’ll see.”

As you would expect, life in van lockdown was reasonably mundane. But there were lessons to come from the experience as well.

“A lot of waiting around for sessions,” Crute began when asked to describe a typical day. “I’d wake up, I’d have a my [breakfast], go in and have a shower at the gym, I’d come out and I’d just wait around for the first session. I’d train, I’d come back to my van, have lunch, wait around for my second session and just wash, rinse, repeat. There was not much going on because Victoria was in such a harsh lockdown; we weren’t even allowed to walk down the street. So it was just monotonous, waiting for training.

“I just lived and breathed training, but I still do that now. I think it taught me that I had to recover a lot more, I had to rest a lot more and it gave me the opportunity to see the benefits of that. Because I couldn’t do anything after training, I couldn’t go out for walks or chasing things up or anything, I just had to stay put and rest.

“And I think that [time] really showed me the benefits of that and I’ve taken that into this camp as well. The importance of rest and recovering between sessions is huge, so that was probably the biggest takeaway from that whole experience.”

Rewind back to pre-pandemic times and Crute had just enjoyed a comprehensive bounce-back victory over Michal Oleksiejczuk at UFC Fight Night Auckland on Feb. 23. The Australian had triumphed via kimura submission after just three-and-a-half minutes of the first round, and he was desperate to turn that into a succession of victories that would have well and truly restored the momentum to a career interrupted by a loss to Misha Cirkunov five months earlier.

But that was easier said than done. While the UFC was able to get back up and running within six weeks of the shutdown, it took Crute almost eight months to find his next opponent.

He has some theories why.

“I’m not going to say everyone ducks me, some people have genuine reasons not to fight me, the sport’s pretty cruel and some people do get injured,” Crute explained. “But when it’s multiple times and some of the excuses that come out of people’s mouths it just makes me smack my head.

“But then again I’m not saying that everyone is making excuses, there are people with genuine excuses of why they can’t fight on this date or injuries or whatever. But I don’t get a lot of the excuses that come out of people’s mouths.”

Crute says there is one big thing that sets him apart from other UFC fighters.

“I think the difference with someone like me and some other guys is that I love fighting where a lot of people like winning; they love the idea of the cameras and the glitz and the glamour and getting their hand raised and looking cool.

“Obviously I love winning, it’s a good feeling, it’s the best feeling in the world. But the feeling of just getting in there and punching on, I can’t describe how good it makes me feel. So that’s the reason I do it, I don’t do it for the cameras or the glitz.”

After eight months on the sidelines Crute finally returned to the Octagon, only Modestas Bukauskas proved to even less of a match than Oleksiejczuk. This time the fight was done in only two minutes.

Crute had prepared so specifically for Bukauskas that when the opportunity arose for the Australian to end the fight he did so almost subconsciously.

“We knew the slip right hand was going to be there. Honestly I could show you training footage of me practicing that over and over again on the pads; as he jabbed he always brought that left hand a little bit low so we knew we could slip out and bomb that right hand on him.”

It has taken a further six months for Crute to get another chance inside the Octagon. Originally slated for UFC 260, Johnny Walker’s withdrawal meant Crute again had to be patient, paving the way for Anthony Smith to step in and give the Australian the biggest test of his career to date.

While Crute was last year rated by ESPN as the No. 1 MMA fighter under 25, Smith has taken on a who’s who of the light heavyweight division across a career that has spanned 50 professional fights.

If Crute is to truly make the jump to the next level, defeating Smith would go a long way to proving that he is no longer just a UFC “prospect” and the self-confidence that has him on a rapid trajectory to a title is indeed justified.

“It’s huge, the reason why I wanted to fight Anthony Smith was because he is such a big name and such a big challenge,” Crute said. “I only ask for the biggest challenges; I’ve only asked for the biggest opportunities, and I’ve been given that now and I’m going to grab it with both hands and not let it go.

“In terms of the opponent [change], the only thing I really had to change was to add more jiu-jitsu into my game…his grappling is so much better than Johnny’s and it’s not even close, so that was one thing that I really had to focus on, was getting some rounds in with some really high level [jiu-jitsu] guys; I talk a lot of crap about jiu-jitsu but I am a black belt and I do take it very seriously.”

While Crute has moved back into a house, where he admits both a dishwasher and a bed that allows him to standup first thing in the morning are welcomed comforts, van life has not been cast aside completely either.

When his fighting days are done or at least he loses the love of “punching on”, there’s every chance Crute will take off on down the road with Buddha in the passenger seat beside him.

Whether he sits behind the wheel as a UFC champion, joining countrymen Robert Whittaker and Alexander Volkanovski as fighters to have worn the promotion’s strap, is destined to play out, as Crute sees it anyway, over the next 18 months.

But that confidence has already visualized the triumph he will enjoy this weekend.

“I don’t expect it to be easy, I know it’s going to be the toughest fight of my career but I do expect to make it look easy. I feel like I’ve got the skills and the physical attributes to put him [Smith] away,” Crute told ESPN.

“And that being said, it could be a dogfight. Anthony Smith has the ability to turn this into an absolute war, I know that. I how tough he is; I know how good he is.

“All I know is one way or another, when the bell tolls and Bruce Buffer calls my name as the winner, I’ll be raising my hand in victory. He’ll have to kill me to stop me.”