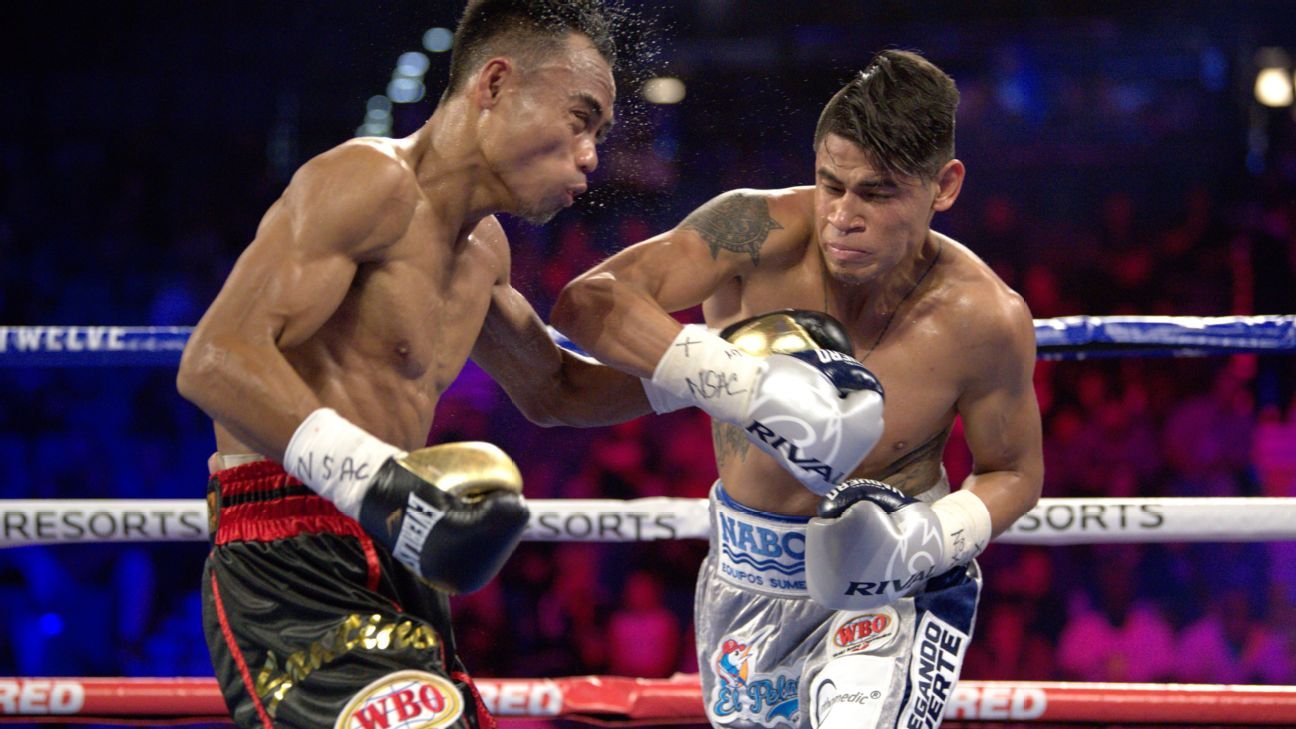 There’s not one guy in the 126-pound division right now better than Emanuel Navarrete. That includes Christopher Diaz, who challenges for Navarrete’s WBO featherweight world title on Saturday.

No one’s going to beat Navarrete in 12 rounds, when he’s standing on his feet — and that includes the other champions at featherweight. The only way Navarrete gets beat by someone in this division right now is if someone catches him cold and knocks him out. That’s the only way.

The punching power, his size, he has figured it out. Does it look pretty? Of course not. But he’s a smart fighter who is peaking at a great time to make a name for himself, and he’s also the busiest champion in boxing right now. There’s a lot to like, especially because his high-volume, pushing-forward style is what’s entertaining for the fans.

But that doesn’t mean we can write off Diaz entirely heading into this fight. Navarrete showed some vulnerable points against Ruben Villa in October. He knocked down Villa twice and looked like he had that fight under control, but Villa proved that with a strong technical approach Navarrete can be slowed. That’s what Diaz is going to have to do — fight from the outside, go down to the body early, and be able to make him pay when he misses, because Navarrete is going to throw a lot.

Ultimately, I think this fight easily could end up being a classic, and a terrific way to kick off a great spring run of fights.

28: Consecutive victories for Navarrete since suffering the only loss of his career in 2012.

1: Navarrete is making the first defense of his WBO featherweight title. He won the belt with a unanimous decision against Ruben Villa in October.

5: Number of WBO junior featherweight title defenses Navarrete made before moving up in weight.

72.5, 23.7 and 18.7: Navarrete’s average for punches thrown, punches landed and power punches landed per round, according to CompuBox. The averages for the featherweight division are 59.1, 16.7 and 12.7, respectively.

2: Second title fight for Diaz. He lost to Masayuki Ito challenging for the WBO junior lightweight title in July 2018.

34.3%: Power punches landed by Diaz according to CompuBox. His opponents land 37.7%.

I have to go with the bigger, stronger fighter who has definitive physical advantages. For a full breakdown and prediction for Navarrete-Diaz, click here.

What’s it like to train Edgar Berlanga, who has 16 first-round KOs in 16 fights?

“There’s no overtime in boxing.”

That is an axiom that Andre Rozier has drilled into the boxers under his charge, from world champions to youngsters just learning the ropes. The Brooklyn-based trainer wants his fighters to get the job done inside the ring, smartly and efficiently, and get out of there. Engage in all-out war with an opponent, he tells them, and your added payoff is nothing but unnecessarily sustained damage.

“I work with my guys to be ring assassins,” Rozier said. “When you get somebody in trouble, it’s time for him to go.”

No one who fights under in Rozier — or perhaps any trainer — embraces that philosophy quite like Edgar Berlanga. The 23-year-old super middleweight has fought 16 professional matches and has won them all, scoring first-round knockouts every time.

Can Berlanga continue his streak against Demond Nicholson?

I think we have more questions than answers from a guy like Berlanga. We know his power is real. He puts it on display 16 times with knockouts in the first round. I would love to see him go more rounds, and I think what it’s going to take is him continuing to take step-ups in competition — and this is a good opportunity for that, potentially, with Demond Nicholson.

Nicholson is pretty seasoned. He does have punching power. I remember watching him fighting Jesse Hart, he went seven rounds with Hart, who can really punch. He comes to fight. Nicholson’s coming into his fight with five straight wins. Yes, limited competition for those five wins, with three KOs, but he’s not coming into this fight already broken or coming off a loss or coming in not thinking that he can win.

The problem with a lot of guys who get in the ring with Berlanga is that, because of the hype that’s around him, they come into the fight already beaten mentally, before they even step foot in the ring. So in knowing this guy and knowing the way this guy is and knowing that he’s pretty tough mentally, I would think, that’s a different kind of challenge.

It’s hard for me to not predict that this fight goes either one or two rounds, though. Berlanga, I think he’s special. We haven’t seen much, with him never going past the first round, but if I were a betting man, and needed to put down some money on a fighter based on who I think potentially could be the next real thing, I wouldn’t mind putting some change down on a guy like Berlanga.

He has the kind of devastating punching power that we haven’t seen in years, maybe since Mike Tyson. His last fight, against Ulises Sierra, was supposed to go the distance. He sparred against Canelo Alvarez and several other top fighters out there, but Berlanga was still able to get him out of there before the first round bell rang.

Knowing the style of Nicholson, he tends to cover up directly in front of guys for periods of time, a little bit too long for my liking. And that’s a recipe for destruction against a guy like Berlanga, who just needs you to stand still for a split second, to be able to land that big shot and hurt you. At that point it’s done. It doesn’t go the distance, and I think Berlanga will find a way to end it early, again. It doesn’t go past the first round.