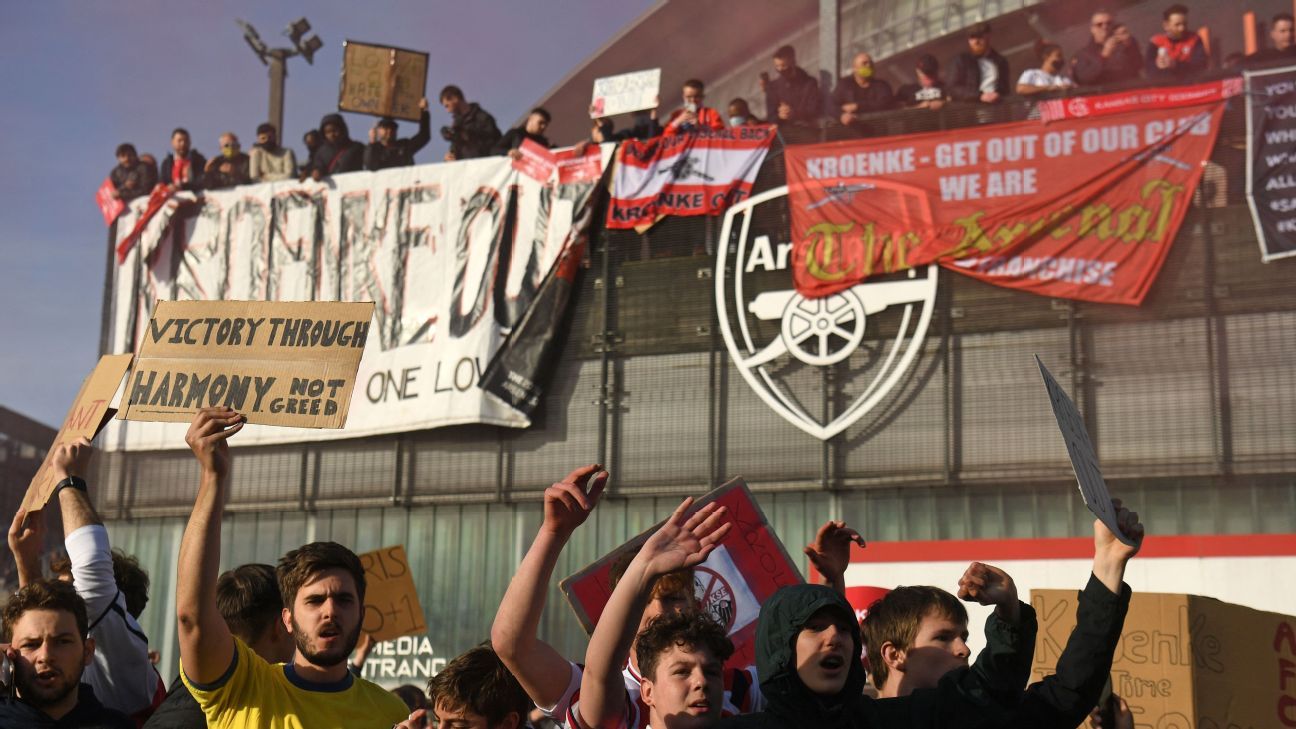 Friday’s 1-0 defeat against Everton is precisely the sort of mediocrity the Arsenal fans outside of Emirates Stadium were protesting about.

If given their right of reply, the Kroenke family might counter that these mid-table affairs would have become a thing of the past had the Super League they signed up to come to fruition. But that argument has emphatically — and rightly — been lost this week.

In these parts, the insult to these supporters has reignited the ire and frustration of a fanbase that has never warmed to Stan Kroenke’s involvement in the Gunners from day one and especially since he took a majority shareholding in April 2011.

That anger had given way to apathy over the years, born from a resignation nothing could be done, diluted further by the departure of manager Arsene Wenger in 2018 and the possibility of regeneration offered first by Unai Emery and then Mikel Arteta.

Yet the ownership’s decision-making is under renewed scrutiny once again, primarily the charge they view Arsenal as a business concern, not a football team. And given that was the accusation before the wildly misjudged attempt to turn their back on English football’s existing pyramid, it was no surprise to see around 2,000 fans descend on Emirates Stadium hours before kick-off to protest against Kroenke’s ownership.

An effigy of Kroenke hung from a lamp post as supporters gathered to chant their discontent in the direction of what one banner called: ‘Kroenke-19: the American virus.’

Flares were let off and plans to disrupt the players’ arrival were mooted, fans unaware that Arsenal asked their squad to assemble at the stadium around five hours before kick-off with Everton snuck in through another entrance away from the furore. Arteta came out for his pre-match interviews to a backdrop of abusive songs aimed at Kroenke outside, a helicopter swirling overhead in a further reminder of the hostility enveloping them.

Arsenal fans arrive in numbers at the Emirates to protest against the Kroenkes’ ownership ahead of their Premier League match.

Little of the anger is focused on Arteta. There are some frustrated with the lack of progress — even allowing for the myriad of mitigating factors this season, a 13th Premier League defeat feels sub-par — but there is wider recognition of the devilish hand he has been dealt.

Arsenal are a club that slid into this position over many years. Arteta knew the size of the task he was taking on when succeeding Emery in December 2019 and is under no illusions now of the distance back to the summit, so much so that the very notion of Arsenal being eligible for a Super League these days seemed somewhat of a stretch.

And so with the Super League defeated, returning to former glories must be earned on the pitch, resurfacing questions over the Kroenke’s commitment to spend what is necessary to avoid further decline.

Arteta can still provide the answer Kroenke seemingly cannot by winning the Europa League and therefore passage back to the Champions League. The importance of their two-legged semifinal against Villarreal, beginning on Thursday, can therefore not be underestimated. Fail and there will be no European football in any form here next season for the first time in 25 years.

That is because they languish ninth in the Premier League, beaten for the ninth time this season on their own ground. This game had the whiff of Everton’s draw with Chelsea on Tuesday, a sideshow starting firmly in the shadow of external events.

And in a week when the so-called ‘Big Six’ scored the biggest of own goals, Bernd Leno somehow managed to divert Richarlison‘s tame 76th-minute cross into his own net to give the visitors three points they celebrated with an extra edge, even allowing for the fact it keeps them in the hunt for Champions League football.

Of all the club statements condemning the rebel dozen, Everton’s was among the most forthright and it would not be surprising were their players enthused by an victory over opponents who declared themselves the superior force through their off-field actions.

Improvement can reasonably be expected on Thursday with Alexandre Lacazette and Pierre-Emerick Aubameyang hopeful of returning to bolster an attack that now hasn’t scored in 12 of 33 league games. The stakes will sharpen minds, too. Emery, now in charge of Villarreal, will recognise the existential turmoil Arsenal remain in.

And so Arteta finds himself having to try and drag the Gunners back from the wilderness with owners above him licking their wounds and fans outside sharpening their knives. Fall short, and more mediocrity awaits.