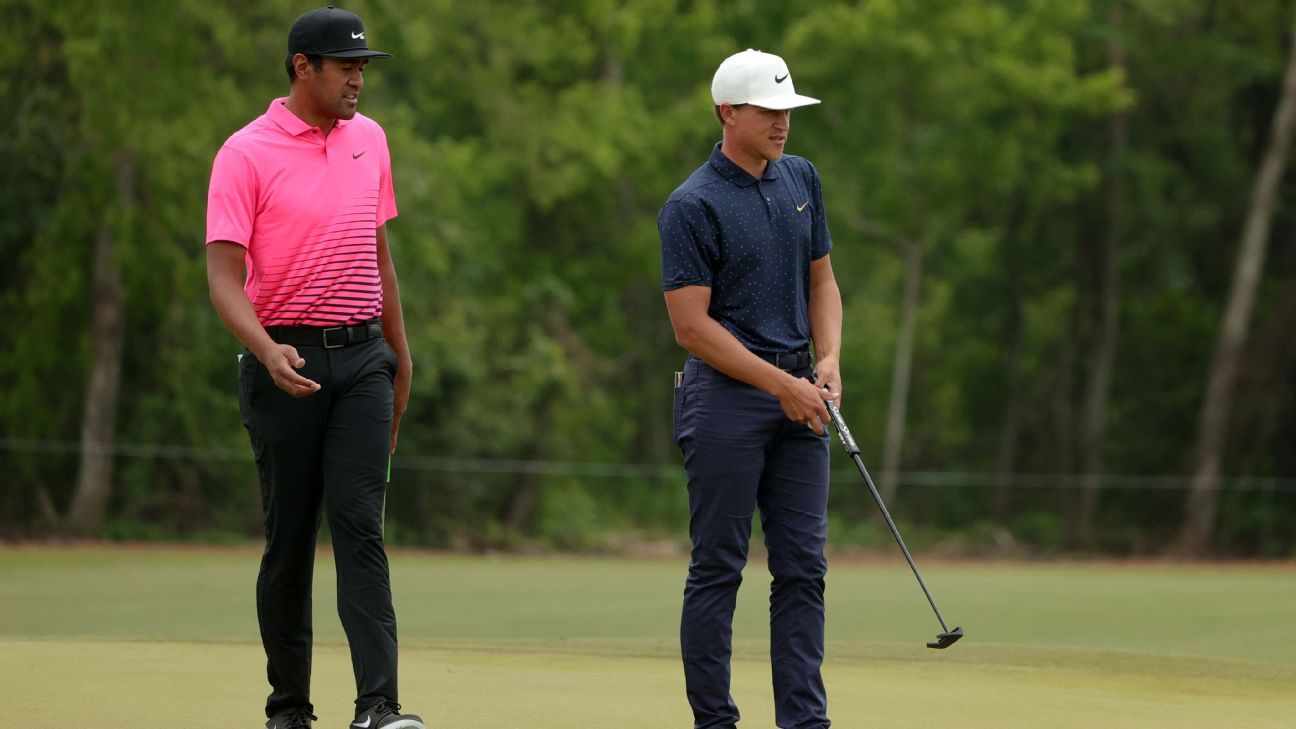 AVONDALE, La. — Tony Finau and Cameron Champ shot a 4-under 68 in alternate-shot play Friday for a share of the Zurich Classic lead with the Norwegian duo of Viktor Hovland and Kris Ventura.

“I know we’re having a good time with this format up to this point,” Finau said about the lone team event on the PGA Tour. “We’ve both played some really solid golf, and we find ourselves at the top of the leaderboard.

“We’ll do what we’ve been doing the last couple days, which is enjoy each other’s company and not add any bonus pressure when it comes to teammate golf.”

Hovland and Ventura had a 69 to match Finau and Champ at 13-under 131. The teams will play best ball Saturday, and close with an alternate-shot round Sunday.

“Just having fun, and obviously we don’t get to do this very often,” Ventura said. “We’re playing some good golf, and the course we both like, so it’s just one of those things where we’re comfortable playing out here.”

It was an eventful day in windy conditions at the TPC Louisiana, highlighted by two aces.

Nick Watney, the Zurich winner in 2007 when it was a traditional individual event, made a hole-in-one on the 14th hole from 224 yards.

Later, Northern Ireland’s Graeme McDowell aced the 217-yard 17th, eliciting a roar from what is normally one of the rowdiest spectator areas on the course. McDowell then sent a cooler loaded with cans of beer and wine to the media center.

McDowell and Matt Wallace bogeyed four holes and shot 70, good enough to make the cut at 8 under.

Watney and Charley Hoffman shot 74 to make the cut at 6 under.

Hovland and Ventura, also tied for the lead after the first round, birdied five holes. But they were left to rue a double bogey on 16, when Hovland hit their approach shot from a fairway bunker into the water short and left of the green.

“It was my fault,” Ventura said with a laugh. “We tried to hit the fairway with an iron (off of the tee) and I hit it in that bunker. I wasn’t the best teammate.”

Finau and Champ briefly surged to a two-shot lead after birdies on the par-4 10th and the par-5 11th. But they bogeyed the par-4 12th when Finau’s approach fell short of the right side of the green.

But Finau made up for it with a birdie putt of nearly 6 feet on 18.

“We knew today with the wind and just the format in general it was going to be a grind, and that’s what we did, especially coming down the last nine holes,” Finau said. “We just kind of grinded it out.”

While attendance was not immediately released, galleries following the leaders looked considerable. Festive fans seemed delighted to be back at an event canceled last year by the coronavirus pandemic. Many did not wear masks, despite signs around the course asking them to do so.

Henrik Stenson and Justin Rose birdied seven holes, including the par-3 17th with a 12-foot putt by Rose. But they also bogeyed three holes to shoot a four-under 68 that put them at 11 under and tied for third with Bubba Watson and Scottie Scheffler.

None of Rose’s and Stenson’s bogeys derailed them. They responded twice with birdies on the next hole.

“A problem shared is a problem halved in this format for sure,” Rose said. “But Henrik was a rock today. I was kind of looking at it in terms of I don’t think he made one mistake that led to us dropping a shot really. It was pretty fun just to have someone that was so solid today. He pulled his weight.”

Watson and Scheffler were at 12 under after three straight birdies on Nos. 10, 11 and 12, but dropped strokes with bogeys on 15 and 17 before finishing with a birdie on Scheffler’s 8 1/2-foot putt.

Billy Horschel and Sam Burns were a shot off the lead through 14 holes, but bogeyed 15 and then double-bogeyed the par-5 18th after Burns’ tee shot went in the water right of the fairway and Horschel’s next shot landed in a fairway bunker. They head to the third round tied for ninth at 8 under.

Australians Marc Leishman and Cameron Smith shot a 72 to remain at 9 under. Their first bogey came after Leishman hit his drive on 13 into one of the most photogenic trees on the course, a massive, towering cypress with roots as high as 4 feet protruding from the grass around it.

Smith couldn’t get a swing on the ball in there and had to take a drop. They also double-bogeyed the 17th after Leishman’s tee shot landed in the water left of the green.