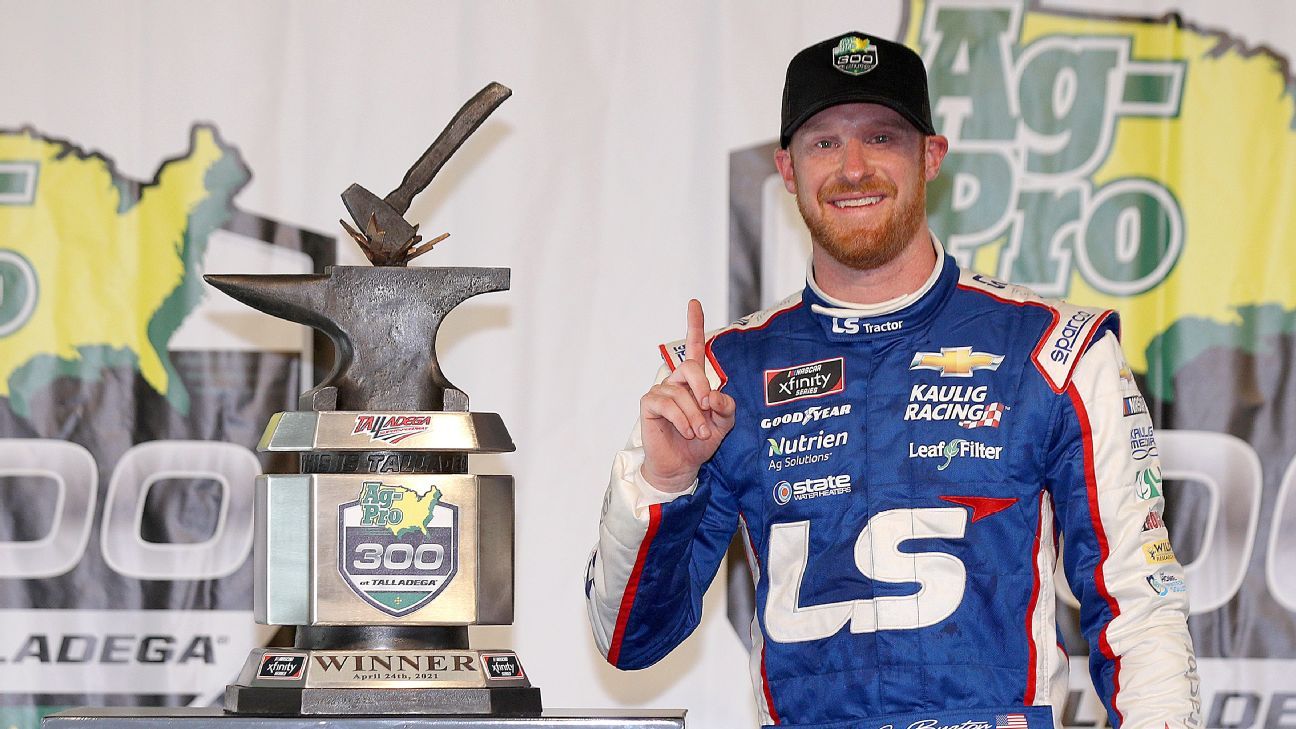 TALLADEGA, Ala. — The rain came at a good time for Jeb Burton, helping him end a years-long personal winless stretch that had left him at times doubting his future in racing.

Burton got his first NASCAR Xfinity Series victory Saturday when heavy rain halted the action with 23 laps left, securing his first high level win since a truck race in 2013.

“The rain didn’t hurt my feelings at all,” Burton said. “Everything I’ve been through in my career, to get one, we didn’t really care how we did it. But we ran up front all day. It definitely wasn’t a fluke.

“We led a lot of laps and it was a blast to drive.”

He said he was “a little bit in disbelief” when told that he had been declared the winner, showing little initial reaction. The disappointment at not getting to finish it passed when he remembered his own career struggles at finding rides and sponsors – much less wins.

Burton passed cousin Harrison Burton on the inside on Lap 82 and stayed up front before a seven-car wreck forced a caution and the downpour sent the cars to pit road.

Burton, who has made 30 Cup Series starts, finally got to celebrate another win since that Texas Truck Series race in 2013. He did manage some rain-soaked burnouts.

Burton was emotional after the win and so were his parents when he spoke to them on the phone.

“I definitely broke down talking to my dad and mom,” Burton said. “They told me to dry it up and stop crying and enjoy it. They were crying too. We just wanted this for so long.”

It was the third straight win at Talladega for Kaulig Racing, with teammate Justin Haley sweeping the two 2020 races.

“Ward and Jeb and that whole Burton family have fought hard to stay in the sport and be a part of it,” Allmendinger said. “I just told Jeb when he got here – it’s not like shut up and do the work – but it’s like, ‘Man just put your head down and let’s do this together and we’re all going to benefit.”

The biggest wreck of the day happened Joe Graf Jr., who appeared to have a flat tire, drifted up the track into Brandon Jones. That, it turned out, was the end of the racing.

It was Gragson’s second straight Dash 4 Cash prize, and he said his share would go to members of the crew.

Haley won the opening stage after taking the lead with an inside move for the final two laps, ahead of Jeb Burton.

Gragson surged past Cindric on the final lap to win Stage 2.

But Burton was up front in the end, for the first time in some eight years. He was already thinking about trying to get the next win.

“Ever since then it’s just been really tough to stay in a place and get in a rhythm it’s been an up and down roller coaster of a career for sure just on the sponsorship side and finding the right home,” he said. “But now I have that.”