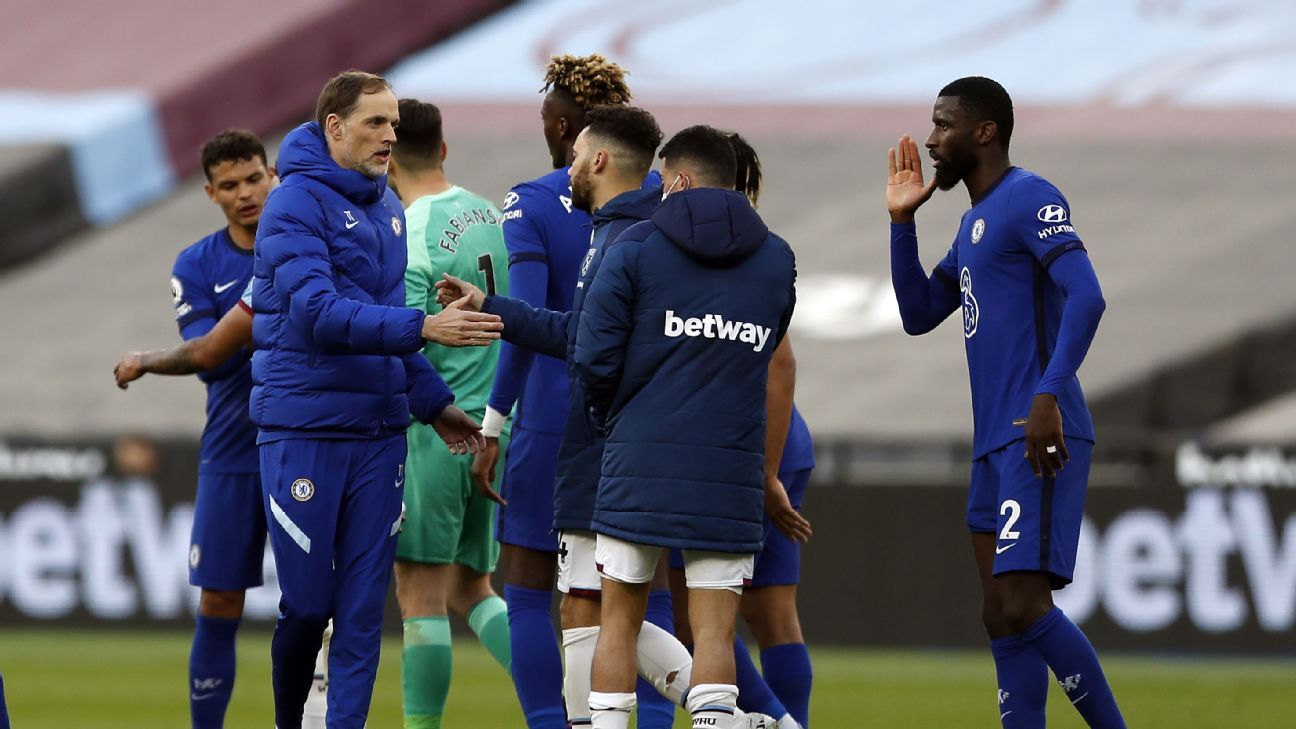 LONDON — As a rare Timo Werner goal secured a 1-0 victory for Chelsea at West Ham, putting Thomas Tuchel’s team firmly in control of the race for fourth spot in the Premier League and Champions League qualification, it was easy to see just why 12 big club owners were so keen to launch their controversial Super League last week.

The high stakes involved in this game are precisely why the Premier League is so successful and is regarded as the most exciting league in the world. But for those owners who want their teams to have a monopoly on the money and glamour that comes with playing in Europe’s big competitions, the Premier League is too unpredictable and littered with potential hazards for their liking. They don’t want games like this, tough trips to West Ham that can inflict damage to hopes of success, instead of annual clashes with Real Madrid, Barcelona and Juventus.

A Super League would take away all the risk and jeopardy for the owners and presidents of the so-called elite clubs, but without the tension and anxiety that comes with this kind of fixture – a London derby between a heavyweight (Chelsea) and an underdog (West Ham) – what would be the appeal to the supporters of clubs whose history is stacked with glory achieved in dramatic fashion, with late winners or unforgettable fight-backs?

Thankfully, we still have games like West Ham vs. Chelsea in the Premier League, and long may that continue. The only downside on this occasion was the absence of fans, due to COVID-19 safety protocols insisting on closed stadiums, but spectators will be back sooner or later and so will the anticipation that comes with such encounters.

Chelsea, who as it turns out were one of the more reluctant rebel clubs within the Super League group, had to overcome a spirited West Ham side and fight all the way to the win at the London Stadium in a game which was crucial to the Champions League hopes of both teams.

A few hours earlier, fellow plotters Liverpool had seen their own top-four hopes suffer a serious blow when Newcastle scored an equaliser deep into stoppage time at Anfield to leave Jurgen Klopp’s side in sixth position with just five league games to play. But Chelsea did what they had to do — earn a victory, away from home against an immediate rival, and survive some nervous moments against a Hammers team that was reduced to 10 men for the final 11 minutes following a VAR-led red card for defender Fabian Balbuena after a challenge on Ben Chilwell.

“We did not talk one more word about Super League from Tuesday on,” said Chelsea manager Tuchel. “I felt everybody was very concentrated and enjoying the focus on the game.

“We said we could arrive with confidence because before we have had crucial away matches of the highest level in the Premier League, Champions League and FA Cup, and we knew we could deliver and win these matches. It was a six-pointer, and we deserved to win.”

The fact that Werner scored the decisive goal was also an argument in favour of retaining the status quo and rejecting the Super League plan.

Since arriving from RB Leipzig in a £47.6m transfer last summer, the German forward has endured a miserable season at Stamford Bridge, with his goal touch evaporating in a blue shirt. His winner in this game, a neat first-time finish from Chilwell’s cross, was only his sixth Premier League goal all season and his first in 15 games in all competitions, but it was a goal that mattered.

When the dust settles on the season and if Chelsea finish in the top four, Werner’s goal in this game could prove to be the one most crucial to the club’s top-four charge. It may turn out to be the one that re-ignites his career as a prolific goalscorer and injects him with confidence, simply because it mattered so much.

Would any goal in a Super League carry so much importance? Maybe, in the event that it actually won the competition, but as of now, Werner’s goal at West Ham was the biggest of his Chelsea career because it could prove to be so significant.

That said, the 25-year-old still has some way to go before he can say he has banished his goalscoring problems. Early in the second half, he missed an easy chance from six yards to make it 2-0 when he shot wide of the goal. Tuchel’s reaction on the touchline, a mixture of shock and exasperation, said it all.

“The second chance I have to score, but I have to come back slowly,” Werner said. “One goal is enough. Two goals might be too much for the beginning, but it’s great to be back on the scoresheet. This season it’s not only the confidence, maybe it’s also luck. Last year the ball always went in, this year it’s different. I’m confident that the chances like my second one will also go in in the next weeks and months.”

Although he could laugh it off after the game, Werner’s miss kept West Ham in the game and meant Chelsea had their hearts in their mouths when Jesse Lingard sent a dipping shot just wide of the post shortly afterwards. Yet Chelsea were able to ride out the West Ham pressure from there and claim the win that secures fourth spot for now, moving them three points clear of the Hammers and a further point ahead of Liverpool.

They had to earn it by winning out on the pitch and, as the fans of the Big Six clubs have shown during passionate protests this week, that is exactly what they want — success, but success that has been earned.