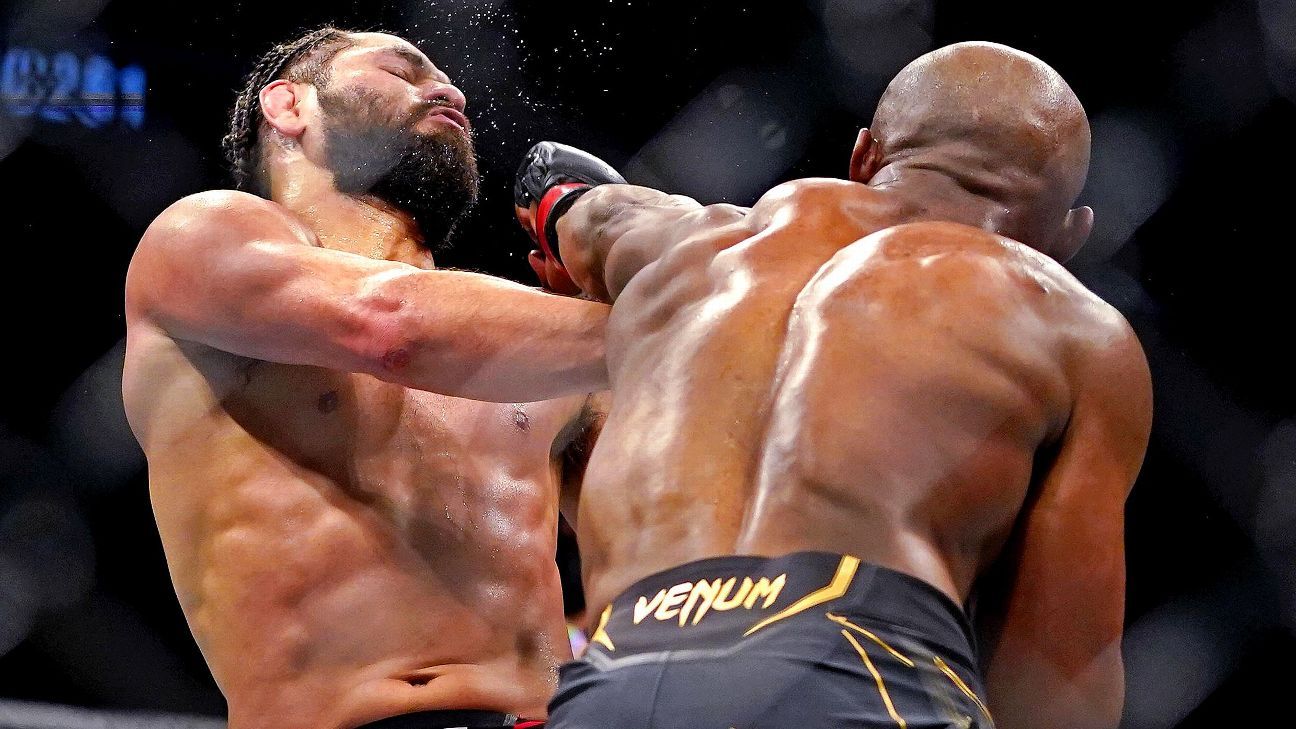 Kamaru Usman proved he is still getting better when he knocked out Jorge Masvidal, and Valentina Shevchenko made a case to be included in the GOAT conversation. Meanwhile, Rose Namajunas delivered once again in a big moment.

After beating his rival Jorge Masvidal — via a vicious right hand, the likes of which we’ve never seen from him before — in the main event of UFC 261, Kamaru Usman told Joe Rogan that he considers himself the best pound-for-pound fighter in the world.

And you know what? Now that Khabib Nurmagomedov has officially retired, I think he’s right.

I don’t think this is me being a prisoner of the moment. The man has a very strong case that is worth recognizing.

Let us count the ways:

He’s now won 18 consecutive overall and 14 straight in the UFC.

He has the second-best winning streak to start a UFC career (14) behind Anderson Silva‘s 16 straight.

That was his fifth welterweight title fight victory, which now ties Pat Miletich for third-most wins in 170-pound title fights. Only legends Georges St-Pierre and Matt Hughes have more.

He’s been so dominant, he now has to fight the guys he’s already beaten again — Colby Covington, who he defeated in a classic back in December 2019, is next.

And perhaps most impressive of all? It still feels, after all these fights, like he’s getting better.

There was once a time where the fans — and let’s be honest, UFC president Dana White, too — felt like he played it safe way too often. This did not endear Usman to the public.

But that is no longer the case. He just handed Masvidal his second TKO loss ever (in Masvidal’s 50th pro fight) and his first since 2008. Amazingly, the last time Masvidal was stopped was in 2009, via submission. In other words, this doesn’t happen often.

But thanks in large part to the recent work he’s done with Trevor Wittman in Colorado, who also guided Rose Namajunas to a thrilling win tonight as well, Usman has turned into one of the most well-rounded fighters on the planet.

Heck, maybe even the best, too.

I’d put his recent resume up there with anyone’s, including Nurmagomedov’s.

And while I know it has bothered Usman in the past that he didn’t get the attention and love that some of the other stars in the UFC received, I don’t think he should worry about that anymore. His fighting is doing the talking these days. His star is shining bright. The best appears yet to come for “The Nigerian Nightmare.”

I already felt like this going into UFC 261, and Valentina Shevchenko’s performance only reinforced it: There is a battle for the title of female GOAT in MMA.

It feels like the topic of female GOAT is already wrapped up in the minds of many. We refer to double champ Amanda Nunes as the GOAT as if it is an absolute. As in, there is no one even remotely close to the conversation. And I kind of understand it, of course. She is the double champ. She’s taken out the best names in two divisions, dominantly. And most importantly, she has two wins over Shevchenko.

But, I scored that second fight between Nunes and Shevchenko back in 2017 for Shevchenko. So did one of the judges involved. It was a split decision win for Nunes, and far from a definitive result. And also don’t forget, that’s in a weight class where Nunes holds a physical advantage. Shevchenko is the one taking on the challenge of moving up in weight every time she fights Nunes.

I’m not saying any of this to take away what Nunes has done, far from it. But I’m telling you right now, there is a case to be made that Shevchenko is the greatest female fighter we’ve ever seen.

Chael Sonnen marvels at Rose Namajunas’ amazing knockout of Weili Zhang and apologizes for previously not recognizing her as one of the greatest of all time.

Rose Namajunas openly contemplated retirement after losing the UFC women’s strawweight title to Jessica Andrade two years ago. She has been open about mental-health issues, specifically the post-traumatic stress she suffered following the infamous Conor McGregor bus attack in 2018. But once again on Saturday night, Namajunas proved she is one of the most mentally tough fighters in the UFC by delivering in another crucial moment.

Namajunas stopped Zhang Weili with a head kick to regain the women’s strawweight title. When 2021 is up, Namajunas’ finish will be a candidate for knockout of the year.

Rose Namajunas left the Octagon with gold around her waist 🏆 #UFC261 pic.twitter.com/QrdjNHV8HF

Namajunas became the first female fighter in UFC history to regain a title she lost previously. Andrade slammed Namajunas on her head — in a bout Namajunas was winning — at UFC 237 in May 2019. At that moment, it was unclear if she would ever fight again. She said so herself. This was nothing new for Namajunas, though. She failed in her first shot at the title, in 2014 against Carla Esparza on the Ultimate Fighter Finale. Three years after that loss, Namajunas knocked out Joanna Jedrzejczyk to win the belt.

She did it again Saturday night. Namajunas has two career KO victories, and both came in title challenges. It doesn’t get any more clutch than that.

Anthony Smith’s perfectly placed kick, which rendered Jimmy Crute unable to fight in the second round because of a leg injury, proved Smith’s title hopes still have some life. This was his first non-headlining fight after a UFC-record — for a non-champion — seven consecutive main events. Smith is only 32, and this win will age well.

After the fight was waved off, @lionheartasmith and @CruteJim embraced in the Octagon 🤝

For Crute, Jacksonville showed its appreciation of his chest-pounding willingness to fight on one leg. That image will stick with a lot of people. Assuming he rebounds — and wise matchmaking should facilitate that — this loss will carry a favorable asterisk, much like Sean O’Malley’s to Chito Vera. And because the fight itself was competitive before Crute’s injury, the UFC can hold Smith-Crute 2 in its back pocket for a rainy day.

Many may find Saturday’s stoppage dissatisfying in a vacuum because no one wants to see an injury end a fight. But the outcome is Smith’s stock rises, Crute’s could remain largely unaffected and an appetite for rebooking remains.