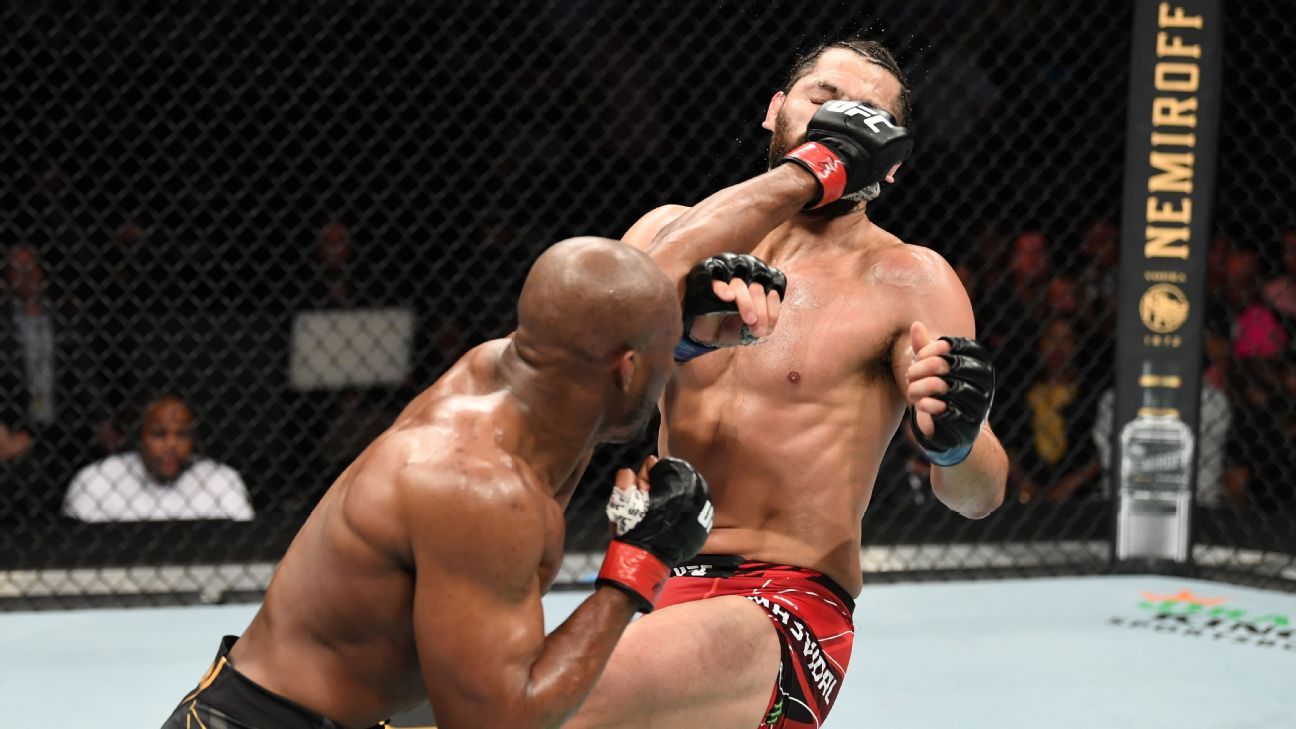 UFC 261 featured three title fights and a ton of memorable moments. Some of those moments, like Rose Namajunas knocking out Zhang Weili to win the strawweight title, were filled with exhilaration. Other moments, like Chris Weidman breaking his leg on a kick attempt, were somber reminders about the risks these athletes take every fight.

But at the end of the card it was once again Kamaru Usman standing tall, hanging Jorge Masvidal the first knockout loss of his career. Usman’s striking has reached another level and he’s clearly one of the best pound-for-pound fighters in the world. Valentina Shevchenko proved very much the same with her dominant victory over Jessica Andrade. Shevchenko joked afterward that her opponents are looking for weaknesses, but there aren’t any.

So who will step up next to face the trio of champions and Anthony Smith, who stopped rising prospect Jimmy Crute in the opening fight on the PPV card?

Covington is the obvious choice here, although I will say, there is a temptation to go with Leon Edwards — only because Edwards has been willing to fight Covington, but never the other way around. It seems a little backwards that Edwards can never pass Covington in the rankings — mainly because Covington isn’t interested in facing him. That’s not how this should work. But, at the same time, you can’t completely blame Covington for being conservative with his No. 1 spot.

Covington has been the toughest challenge yet for the champ. He lost that fight in 2019, and has picked up a win in his only fight since. If he’s at a point in his career where he’s willing to wait it out and only get up for a title shot, that’s his decision. And frankly, it looks like it’s going to work. He is the No. 1 contender as of now, and I believe he will be Usman’s next challenger.

Wild card: Winner of Leon Edwards vs. Nate Diaz on May 15

The UFC has already said Covington is next, but if negotiations hit a snag or that falls through for whatever reason, all eyes will turn to this five-round non-title fight on May 15.

If Edwards wins, he’s a no-brainer to fight Usman. If it’s Diaz — look, clearly he wouldn’t be deserving of a UFC title shot, and personally, I would rather see Usman fight Stephen ‘Wonderboy’ Thompson if somehow, some way, he didn’t fight Covington or Edwards — but we know how this sport works.

I will say this: If Diaz beats Edwards at UFC 262, he will have taken out a guy who is a legitimate No. 1 contender. So, even though his body of work wouldn’t say title shot, that one result certainly would.

Who’s next: Winner of Leon Edwards vs. Nate Diaz on May 15

Masvidal is now 0-2 in UFC title fights, but he still has plenty of big fights ahead. He has history with both Edwards and Diaz. If Covington ends up getting the next title shot, and Edwards beats Diaz, Masvidal vs. Edwards is a terrific fight for the UFC.

And if Diaz upsets Edwards, that’s an even bigger fight for Masvidal — the BMF rematch. That fight probably could headline another UFC pay-per-view, if the company wanted it to.

Wild card: Loser of Leon Edwards vs. Nate Diaz on May 15

I mean, I just really think Masvidal’s next fight will be against one of these two. And if it’s not the winner … and my calculations are correct … that means it would have to be the loser. Again, there’s just history here. They are big fights. My guess is that Masvidal will fight the winner, but it could be either one.

Who’s next: Winner of Carla Esparza vs. Yan Xiaonan on May 22

What is better than Rose Namajunas, huh? Man. So good. I’ve been covering this sport since 2009, and Namajunas owns two of the top moments in all that time as far as I’m concerned. This and Madison Square Garden in 2017 was nothing short of magic. I am very much looking forward to what this second chapter of Namajunas as a champion looks like, and I think it’s pretty obvious it will start with the winner of this fight.

Esparza has a win over Namajunas. Yes, it was a long time ago, but it’s there and she’s deserving of a shot. So is Xioaonan, who has quietly been a wrecking ball in the division as of late.

In a way, it makes perfect sense. Jedrzejczyk fought Zhang in a five-round war one year ago and came up just short in a split decision. We know who Jedrzejczyk is in this sport. We don’t need to see her win a non-title fight to know what she brings to the table in a title fight. And she knows it.

She’s made it clear she only has interest in a title fight. It all adds up. The problem is, of course, she’s already lost to Namajunas twice. I don’t think you can put this together for the third time with her coming off a loss, even though it wasn’t a bad loss. But it’s possible.

Who’s next: Winner of Joanne Calderwood vs. Lauren Murphy on June 12

I almost put a question mark after this. Like, I guess? Calderwood. Murphy. Does it matter? Can she fight both in one night?

Calderwood is a very good fighter. Murphy, same. But what will the odds be between Shevchenko and either one of them? You can’t set odds high enough! But hey, such is the situation at 125, right? And even though none of us believe Shevchenko is losing any time soon, the best this division can do is just offer up the next challenger one after another. Calderwood was supposed to fight her in 2020, the fight fell through and she suffered a loss. She’s deserving of a shot. So is Murphy, with a win on June 12.

I can’t come up with anything else. And hey, it actually isn’t a bad idea, right? Zhang suffered a stunning upset against Rose Namajunas, and I’m sure she’s going to want that one back. But if the UFC is looking for something to get us excited about when it comes to Shevchenko, they could do a lot worse than the now-former strawweight champ. I don’t see it, but if it happened, I wouldn’t be mad.

Who’s next: Winner of Dominick Reyes vs. Jiri Prochazka on May 1

It was a bit of an unusual end to Smith’s anticipated bout against Jimmy Crute, only from the sense we don’t see many fights end due to a nerve issue. But unusual or not, Smith deserves full credit. That jab was a thing of beauty, and something we really haven’t seen from him before — at least not one that’s been that efficient.

Reyes and Prochazka fight one week from now. Whoever wins, I imagine he’ll still need one more victory to get a title shot. And it would make sense for that next challenge to be Smith.

Going into the fight, Smith said beating Crute was about defending his spot, and after this fight, he’d be looking to climb again. A fight against Ankalaev would be more of a, well… it would be another fight to defend his spot. But it’s a fight that sure makes a lot of sense.

Ankalaev is climbing himself. He deserves to fight someone ranked ahead of him. I like the winner of the May 1 bout more, as it rewards Smith for winning his last two bouts. But since he’s still less than a year removed from two poor performances against Teixeira and Rakic, it wouldn’t shock me if his number gets called for the Ankalaev fight.