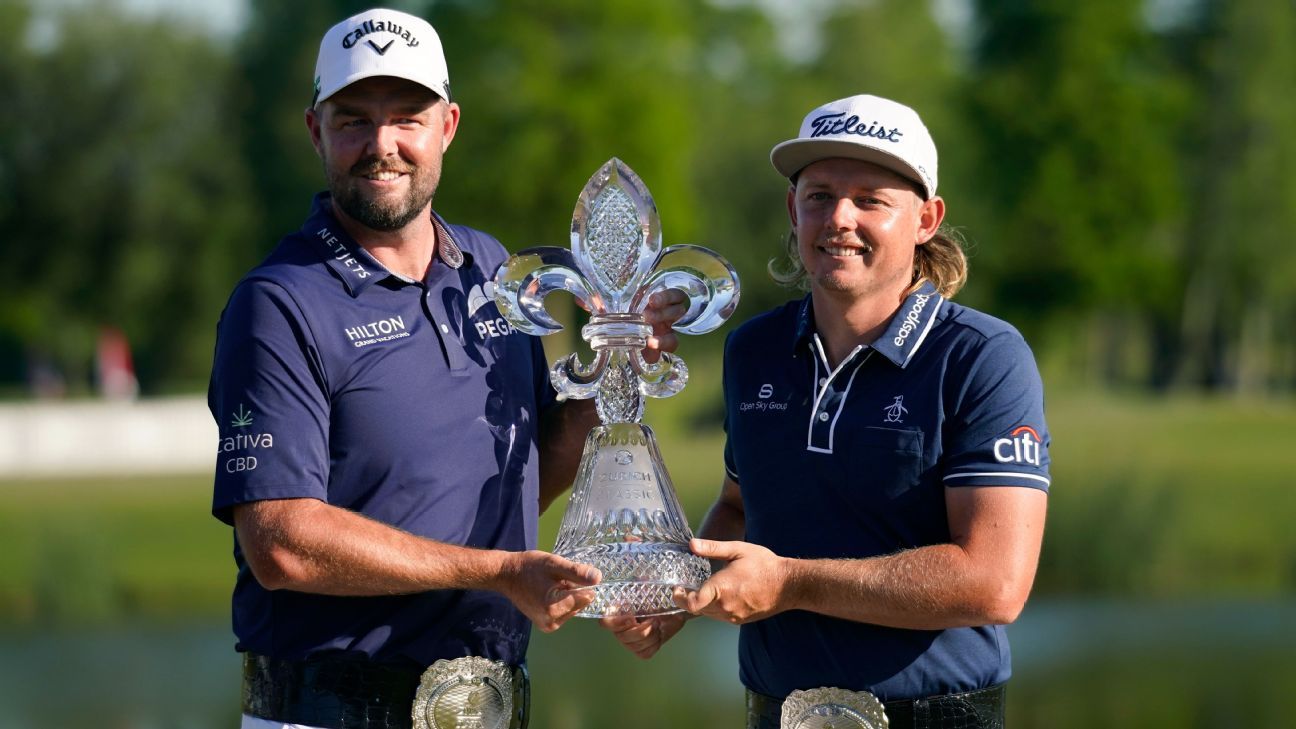 AVONDALE, La. — Cameron Smith and Marc Leishman outlasted Louis Oosthuizen and Charl Schwartzel to win the Zurich Classic in a playoff that capped a tight and tense final round Sunday.

Smith and Leishman won with a par on their second trip up the par-5 18th after Oosthuizen pushed his tee shot into the water and narrowly missed an 11-foot putt for par.

The Australians forced the playoff by shooting a 2-under 70 in alternate-shot play at the PGA Tour’s lone regular-season team event. Oosthuizen and Schwartzel began the round with a one-stroke lead, but shot a 71 with three pars and two bogeys.

Smith’s last victory came at the 2020 Sony Open in Hawaii.

It was Leishman’s sixth career victory, his best result since tying for fifth at the Masters this month and his first win since the 2020 Farmers Insurance Open.

The climactic finish capped off a compelling duel between two teams that teed off together in the final grouping and took turns holding leads that never grew to more than two strokes.

After Smith made birdie putts of 9 feet on the par-5 seventh and 7 feet on the par-3 ninth to pull his team even atop the leaderboard, the Aussies went in front on 10, when Schwartzel’s approach found the bunker and his team two-putted for bogey.

Smith and Leishman took a two-shot lead with a birdie on the par-5 11th, where Leishman drove 307 yards into the fairway and Smith sent the team’s second shot 265 yards to the green, setting up a birdie.

But the gave a stroke back on 13 when Leishman’s drive went into the TPC Louisiana’s trademark, towering and old-growth cypress three that stands alone like a monolith in the fairway. That forced the team to take a drop that led to a bogey.

The South Africans moved back into the lead on 15, where Schwartzel followed up Oosthuizen’s 205-yard approach shot with a nearly 15-foot putt for birdie, while Smith, whose approach had fallen short of the green, narrowly missed a 13-foot putt for par.

Smith then bounced his booming, 294-yard tee shot on 16 into the water, but it went out of bounds close enough to the green that Leishman was able to hit a chip on his team’s third shot and rolled it in from more than 23 feet for birdie to tie Ooshuizen and Schwartzel at 21 under.

Peter Uihlein and Richy Werenski shot a 67, with six birdies and one bogey, to shoot up the leaderboard from 18th to third.

Ryan Palmer and Jon Rahm, the defending champions from 2019, closed with a 70 to finish seventh at 17 under.