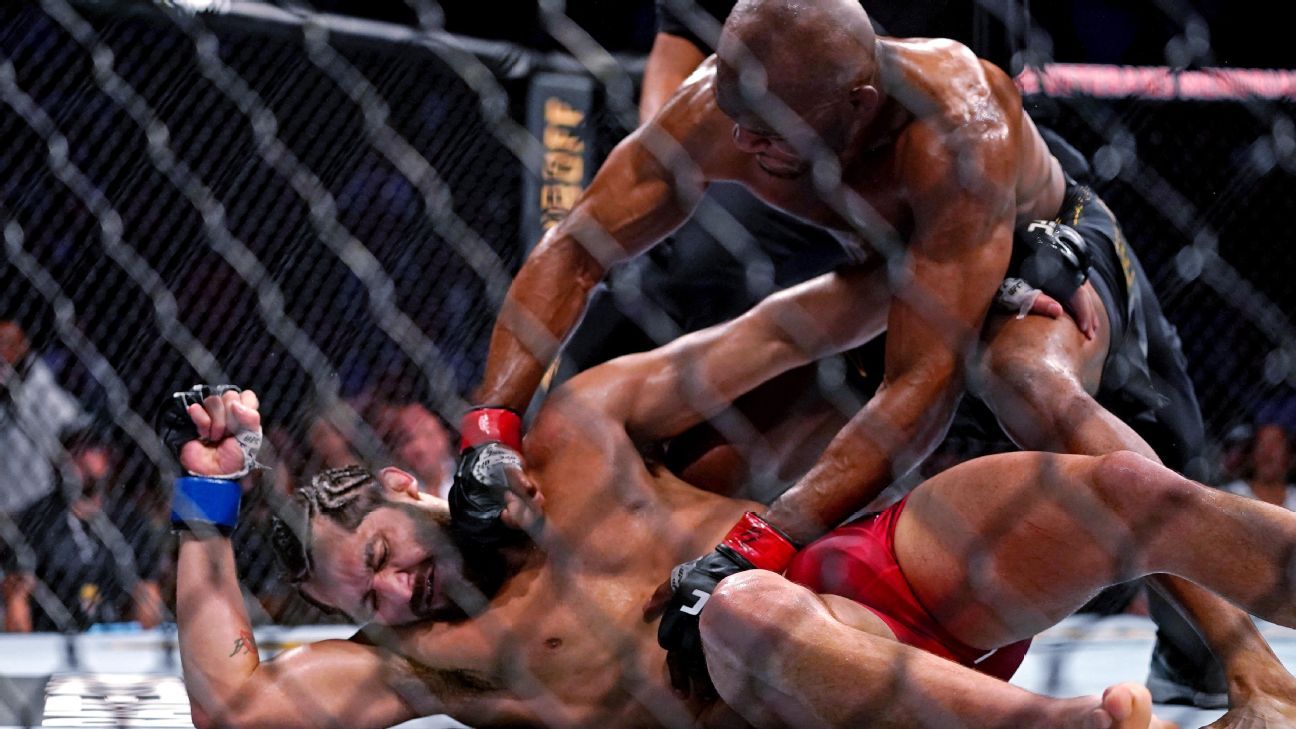 UFC 261 did not disappoint with its three title fights. All three ended in KOs, with Valentina Shevchenko leading off with a dominant victory over Jessica Andrade, followed by highlight-reel knockouts by Rose Namajunas and Kamaru Usman.

The moments were memorable, but Jorge Masvidal was barely up off the mat after getting knocked out by Usman in the main event before eyes turned toward the future. Is Usman on a trajectory to eclipse the best fighters the UFC has ever seen after moving to 14-0 in the promotion, and if so, can he continue to dominate the best fighters in the welterweight division? First up appears to be a rematch with Colby Covington.

As for Shevchenko, it’s looking increasingly unlikely that anyone other than Amanda Nunes presents a serious challenge to the women’s flyweight champion. But is now the right time to book the trilogy fight, with the risks that come with it?

Namajunas was the only challenger to win a title fight at UFC 261, but it’s familiar territory for the now two-time strawweight champion. In looking at that division’s history, with its multitude of title changes, does Namajunas now have the best résumé and assume the mantle of UFC strawweight GOAT?

Not all of Saturday’s headlines were created inside the cage. UFC president Dana White said he would be open to giving Nick Diaz, who hasn’t fought in six years and was in attendance Saturday, a return fight. Will Diaz compete in the Octagon in 2021?

Our panel of Ariel Helwani, Marc Raimondi, Brett Okamoto and Jeff Wagenheim breaks down what’s real, and what’s not, coming out of UFC 261.

Helwani: Real. I believed Nick Diaz when he told me in November 2019 that he’d fight again in 2020. Of course, no one could have predicted the pandemic would ruin many great things planned for 2020, including Diaz’s highly anticipated return. But 2021 is the new 2020, and I believe he is sincere in his desire to fight at least one more time. He’s training actively and appears to be in phenomenal shape once again. The fact that he was in attendance at UFC 261 also speaks volumes. He wants to be around the sport. He wants to embrace the sport again. He wants the sport to embrace him, too.

Dana White said at the postfight news conference that he was going to talk to Diaz afterward. I’m told that the meeting went well, but no other details were provided. That’s OK. This is all good news in hopes of seeing one of the most popular fighters in MMA history compete for the first time in over six years.

Whom would he fight in said return? We can worry about that later. I like the idea of running it back with Robbie Lawler — why jump in the deep end right away? — but I think any opponent talk might be a tad premature at the moment. One idea I don’t like? Khamzat Chimaev. Why? No point in that. That would be a huge mistake. No one wants to see Diaz fending off relentless takedown attempts. They want to see vintage Diaz, which will be a welcome sight for all.

Raimondi: These are hard things to discuss in the moment. Recency bias is a real thing. What Usman did in knocking out Masvidal at UFC 261 was spectacular. I think Usman is the top pound-for-pound fighter on the planet right now. But the greatest of all time in MMA? That’s a much tougher conversation.

With that being said, I’m going to say this statement is real. No, it is not unreasonable to think Usman could eventually get to that prestigious status. He is that excellent, and seems to be only getting better. Already, you could say Usman’s consistency is on a different plane than that of his peers. He is 14-0 in the UFC and has won 18 straight. Rarely have we ever even seen him in trouble. And even when there appears to be a flaw or a moment of concern, Usman remains incredibly relaxed and composed, like when he came back from getting dropped in the first round at UFC 258 and finished Gilbert Burns.

Those 14 straight wins in the UFC are significant. Only one man has a longer UFC winning streak: Anderson Silva, with 16 in a row. During the tail end of that streak, Silva was thought to be the greatest of all time. Georges St-Pierre was neck and neck with him, too, and Jon Jones gradually eclipsed both of them. Silva, St-Pierre and Jones all have one specific thing in common that Usman has yet to achieve, and that is lengthy title reigns.

Jones has 11 title defenses at light heavyweight, Silva had 10 at middleweight and GSP nine at welterweight. Usman is currently sitting at four title defenses at welterweight — he is still tied for third place behind Matt Hughes at welterweight (seven) — so he has a ways to go with the belt before he can get into that conversation. Now, you could make the argument that the competition Usman is facing is on par with or even tougher than the opponents GSP, Silva and Jones fought. But that’s a difficult thing to quantify.

Usman’s win Saturday was made even more impressive by the way he did it. Masvidal had not lost via KO/TKO since 2008, and had never been put out the way Usman put him out with a bazooka-like right hand. Masvidal is famous for his durability. Usman dominated Masvidal last July at UFC 251 by unanimous decision, but this time he put an undeniable stamp on it.

If Usman goes on and beats Covington in another rematch, then handles someone like Leon Edwards, the conversation about best welterweight and best fighter of all time can be reopened with an increasingly convincing argument. Usman, 33, is not there yet. But is it conceivable he could one day reach that pinnacle? It absolutely is.

Dana White is right, there’s no reason to book Shevchenko/Nunes 3

Okamoto: Not real. Obviously, there are numerous reasons to book the trilogy — namely, that this might be the only truly competitive fight for either one of them. Now, is there reason to book it right away? Not really. The opportunity doesn’t appear to be going anywhere.

But I do agree with White, in that Shevchenko and Nunes should be able to build their own legacies completely separate from one another, before we think about squaring them off again. The reality is, they aren’t in the same weight class. So, pitting them against one another, as great as it is, isn’t really fair to Shevchenko, since she’s always the one at a disadvantage.

If you’re the UFC, it doesn’t do much good to book the trilogy now. Yes, it’s an amazing fight, but then what? If Nunes loses, then you just lost your dominant “champ champ,” the only current one on the roster (although Shevchenko would at least temporarily assume that mantle, depending on whether or not she’d take more fights at 135).

And if Shevchenko loses again, you’ve lessened the appeal of your flyweight champion. At this point, let them defend their respective titles against just about everyone. Have them really scrub those divisions clean. And if they’re still standing at the end — as, at least right now, we would expect them to be — then book that third fight.

Real or Not: Namajunas is the greatest strawweight ever

Wagenheim: I suppose this is real, but I say that without a lot of energy behind it. When I ponder who’s the greatest ever in any weight class, I think of the dominance that Amanda Nunes and Valentina Shevchenko have put on conspicuous display in ruling their divisions. Namajunas has been far from dominant.

Namajunas is now a two-time champion in the UFC’s 115-pound division, but she has only one successful title defense to her credit. Joanna Jedrzejczyk has five. But, of course, Namajunas owns two victories over Jedrzejczyk. The only other strawweight with a title defense is Zhang Weili, and it was the greatest fight in strawweight history (also against Jedrzejczyk). But Namajunas has defeated Zhang, too. So it’d be hard to single out anyone but “Thug Rose,” and with the title back in her possession, Namajunas will have a chance to bolster her case moving forward.

The concept of greatest ever seems unsuited for this weight class, as the throne has been stuck in a revolving door. There have been six title reigns, more than in any other women’s division as well as a couple of longer-lived men’s weight classes. But Namajunas has played a role in every one of those reigns. Aside from her own two runs with the belt, she dethroned Jedrzejczyk and Zhang, was dethroned by Jessica Andrade and lost the 2014 title fight that made Carla Esparza the inaugural UFC strawweight champ.

Namajunas’ fingerprints have been all over the division for its entire short history. If that makes her the greatest at this point, so be it.