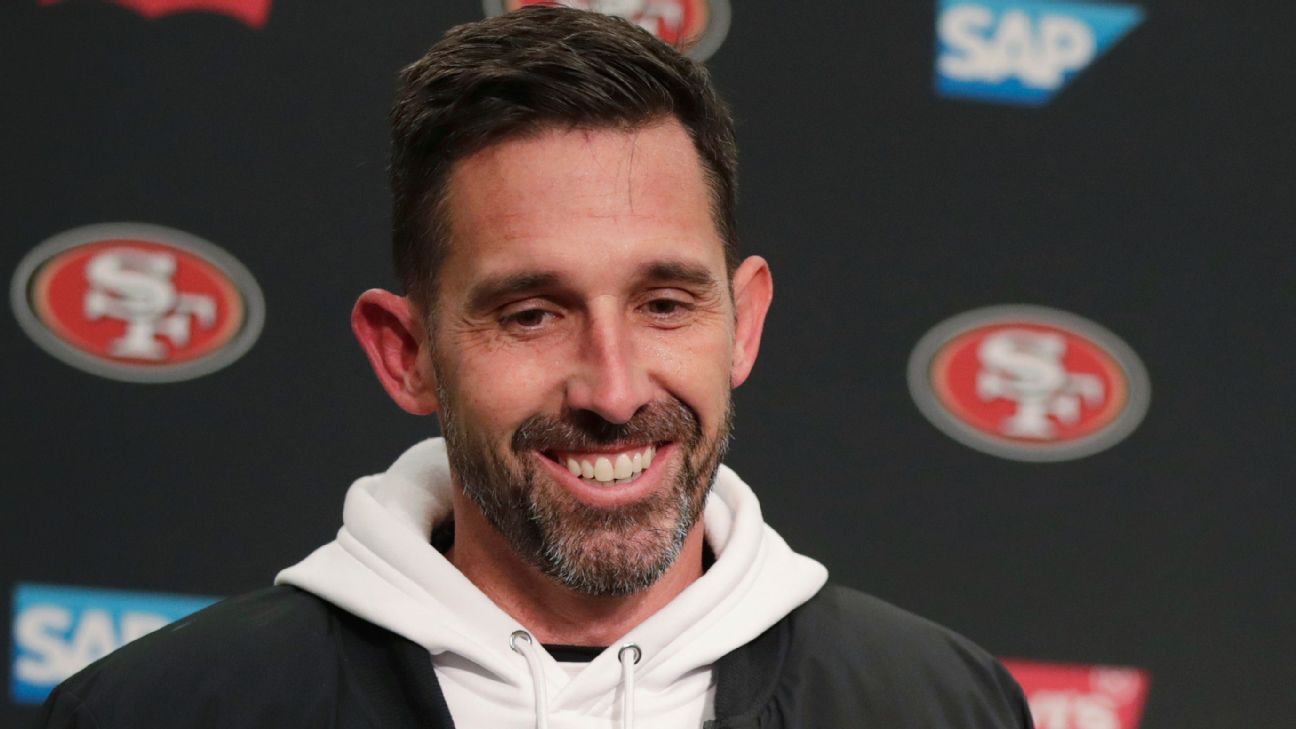 SANTA CLARA, Calif. – Three weeks after the San Francisco 49ers‘ bold trade up to the No. 3 pick in the NFL draft, coach Kyle Shanahan said the team was already comfortable enough to draft three of the top five quarterbacks but the team could “get there” with Nos. 4 and 5.

Over the past month, Shanahan, general manager John Lynch and their staffs put in the remaining work to not only see if they could get comfortable with all five of them — Clemson’s Trevor Lawrence, BYU’s Zach Wilson, Alabama’s Mac Jones, North Dakota State’s Trey Lance and Ohio State’s Justin Fields — but also decide which one they believe is best-suited to be their choice.

Speaking to media for about 30 minutes, days before they must make that decision official, Shanahan, who was a late addition to the annual pre-draft news conference, did his best not to tip the Niners’ hand and said they have indeed grown fond of all five quarterback prospects.

“We knew that there was three at the time,” Shanahan said. “That’s why we thought three was a good spot to go to. After going through this whole process, I felt good about five guys at three. Yeah, we had a guy probably at first back then, but we knew that wasn’t set in stone. And we knew the only way we could figure out a little bit more, especially when you can’t work out guys, you can’t meet with these people, there’s a lot of things you can’t do this year. The only way we could go off that is if we got closer to where we could do a little more in-depth thing that we didn’t have to hide. We did. In that time, I think every candidate has gotten stronger. And yeah, we probably started with one in mind but that one has gotten better since and so have all the other candidates.”

Since the trade was announced, the 49ers have been operating under the common presumption that Lawrence and Wilson will go with the first two picks, leaving them a choice among the group of Jones, Lance and Fields.

Soon after the trade, Jones was the player most commonly connected to the Niners by league observers and thought to be the “third” guy on the list behind Wilson and Lawrence. Lynch and Shanahan spoke to the media on March 29 and flew to Jones’ second pro day on March 30, while another 49ers contingent including assistant general manager Adam Peters, went to Ohio State to see Fields.

After that, the 49ers also played a prominent role in second pro days for Lance and Fields with Shanahan and Lynch attending both. Throughout, Lynch said the Niners have gathered opinions on all three players from coaches, scouts, college coaches, private quarterback coaches and family members.

And while Lynch said he encourages everyone to believe strongly in their opinions, the decision will ultimately fall to he and, especially, Shanahan.

“It’s been an incredibly thorough process but ultimately someone has got to be charged with making a decision and in this case, it’s the both of us,” Lynch said. “Everyone has in their contract ‘you do this,’ and the draft is mine, but I told Kyle from the beginning that he and I are doing this together. And when it comes to quarterbacks … we have a head coach who is also our offensive play caller, I will always defer to him. What’s cool about that is I think Kyle respects my opinion enough, he always wants it and ultimately, we arrive at decisions, we will and come Thursday we have a pick that hopefully makes everyone proud. But that will be judged in years to come and we have done our best to make sure it’s a great decision for this franchise.”

Another piece of the puzzle that should get some clarity soon is what will become of incumbent starter Jimmy Garoppolo. Lynch and Shanahan have been adamant that they, barring a too-hard-to-resist trade offer, intend to keep Garoppolo while the drafted rookie learns behind him and competes.

That tone seemed to soften a bit Monday when Lynch and Shanahan were asked multiple times about Garoppolo, including whether he would still be on the roster come the day after the draft.

On a less macabre note, Lynch said he had been in touch with Garoppolo last weekend and that Garoppolo has been a part of the virtual meetings and plans to be at the offseason workout program.

“Jimmy’s been completely professional, as he always has been with us,” Lynch said. “Jimmy knows — I think one thing we’ve always tried to do with all our players and Jimmy as well — is just be very up front and honest. And with what we’re doing and why we’re doing it, and my experience as a player, when people do that, you can live with that.”

While the NFL world awaits the Niners’ pick at No. 3, Lynch did confirm one decision that has already been made. Right tackle Mike McGlinchey, San Francisco’s first-round pick in 2018, will have his fifth-year option picked up. That means, barring a contract extension before then, McGlinchey will earn a fully guaranteed $10.88 million in 2022.

In the meantime, all eyes remain on which quarterback, exactly, McGlinchey will be blocking for in 2021.

“Do we know exactly who we want?” Shanahan said. “Maybe. Probably. But maybe not. I don’t feel like we need to say that. That’s not just for our case. But lots of stuff happens between now and the draft and you don’t want the whole league knowing exactly what you’re set on four days before the draft and we also care about a lot of people who have been involved in this … I don’t know if I want the league to know. I don’t think it necessarily helps and that’s why no one is really going to know whether we know or not until we pick. That’s kind of what we’re comfortable keeping it at.”