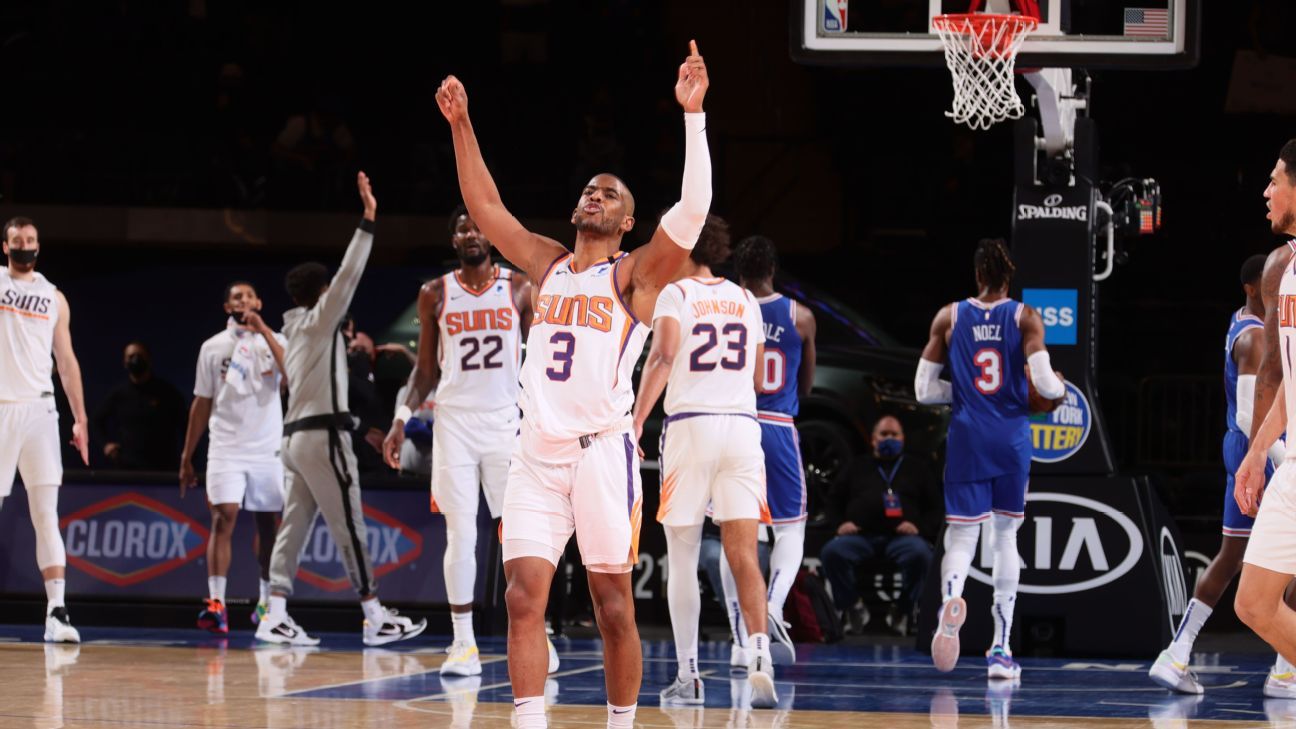 Chants of “Defense!” echoed through Madison Square Garden when Chris Paul pulled out a cross over, spun and then flung up an 18-foot fadeaway over Julius Randle that silenced the Garden and ultimately snapped the New York Knicks’ nine-game winning streak.

The Phoenix Suns’ All-Star point guard scored seven points in the final 1:23 to hand the Knicks a 118-110 loss at the Garden.

This was the Knicks’ first loss since April 7 and it came at the hands of Paul, who delivered three consecutive daggers in the kind of Garden-silencing manner seen from superstar opponents in the past like Reggie Miller and Michael Jordan.

The Knicks (34-28) led by as much as 15 in the first half as they were looking to extend their longest winning streak since winning 13 in a row in 2012-13. In a game that players from both teams said had playoff intensity, Phoenix (43-18) showed why it owns the second-best record in the NBA.

“We wanted this one, we wanted this one bad,” said Phoenix’s Devin Booker, who scored 33 points. “Obviously we knew about the streak that they had going on and we knew that this was going to be a dogfight.”

Mikal Bridges scored 16 of his 21 points in the second half to help erase the Knicks’ lead. Paul then sealed the game with his clutch performance. The point guard nailed a 20-foot stepback jumper with 1:23 left to give Phoenix a six-point lead.

Randle (18 points) buried a corner 3 to cut Phoenix’s lead to 113-110. Paul then did everything he could to shake Randle and knock down the fadeaway at the shot clock buzzer, quieting the crowd on hand. Even though the Garden can only allow a limited number of fans in, Paul still felt the juice that comes with playing at the Garden.

“There is no better place to play than here,” said Paul, who had 20 points and six assists. “The energy here at the Garden… everybody was messing with the young guys before the game like this ain’t just a regular game.”

Paul made sure the Knicks didn’t make one final comeback, burying a contested 3-point shot with 14.5 seconds left.

“I mean it’s insurance,” Booker said of Paul’s ability to hit three shots in a row against the Knicks’ defense. “He was guarded well on most of those possession and it is just one of those things, you can’t do anything about it. That’s Chris Paul and he makes those plays and you just have to bow your head.”

The Knicks were already looking forward after the loss and not reflecting back on their longest winning streak in years. They play Chicago at home next before embarking on a difficult six-game road swing that ends with games at Denver, Phoenix, the Clippers and Lakers.

“It’s over,” Randle said of the winning streak. “Win the next one.”