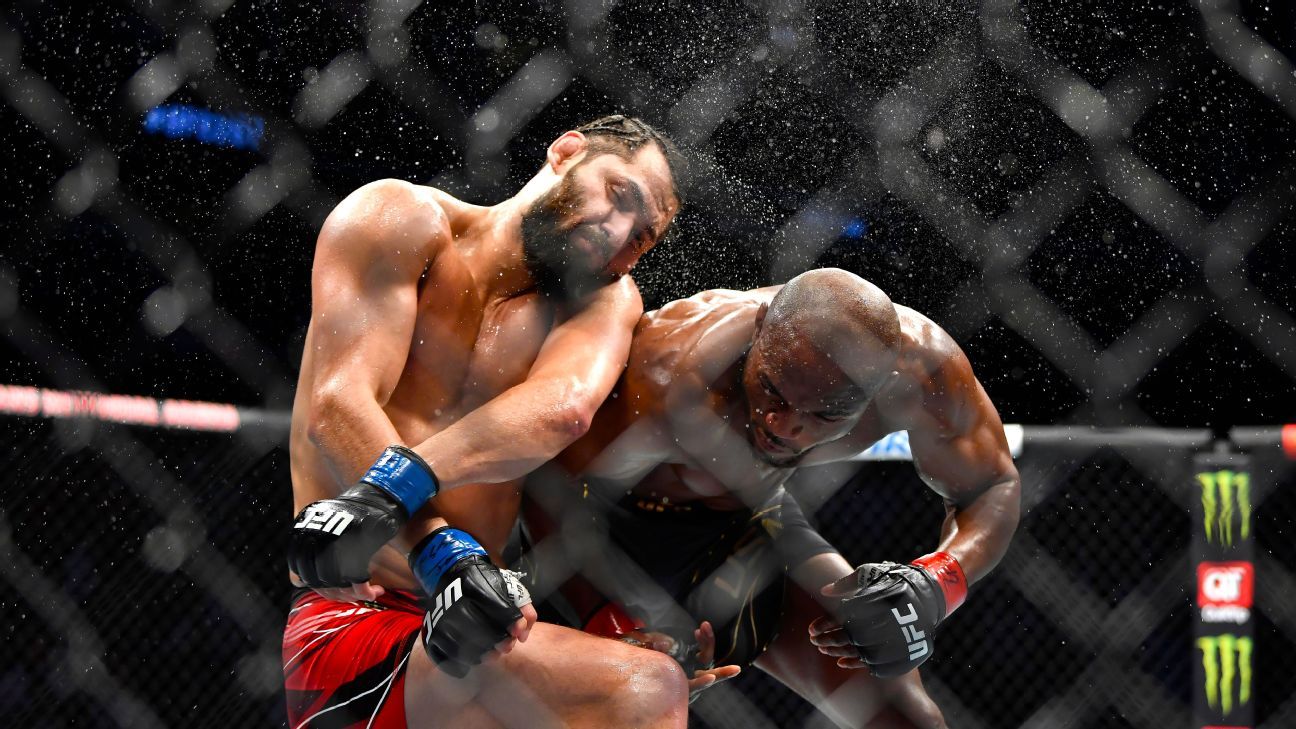 Jorge Masvidal said Monday he feels “great” and is hoping to earn his way back to another title shot after losing via second-round knockout to welterweight champion Kamaru Usman on Saturday in the main event of UFC 261.

Masvidal, 36, admitted there were brief moments when he thought about “retirement, or could I get the belt, because if I’m not going for the belt, what am I doing here?” But he said those around him, especially his father, Jorge Masvidal Sr., and his coach, Mike Brown, encouraged him to keep chasing his dream of winning a title.

“I thought about some foul s— for a little bit,” Masvidal told ESPN’s Ariel Helwani. “But your mind can be weak at those moments, at its weakest.

“But it was only for about maybe minutes to an hour until I spoke to those people that I trust the most in the world. They were like, ‘No, you still got this. The drip is still there.’ You just have to arrange this and that. And also you’ve got to win us over. They’re not saying it’s forever. Those closest to me were saying to me, go out there the next fight and prove I still got it.”

It was Masvidal’s second consecutive loss while vying for Usman’s title, but it was his first defeat by knockout or technical knockout since 2008.

“I love this sport, I can’t retire without the belt,” Masvidal said. “I’m stubborn, I just want to give it as much as I can. I’m 36 years old, I still feel good, I still push myself at the gym and not be overwhelmed by the young guys, so why not give it another run?”

Masvidal said Usman tricked him into thinking he was going to shoot for a takedown Saturday. But as Masvidal readied his takedown defense, Usman unloaded a huge right hand to his jaw.

“I thought he was going in for a shot, and by the time I realized it wasn’t a shot, it was too late,” Masvidal said. “I read the information wrong. He sold it to me beautifully. Of that moment, I am a fan, because I love this sport so much. It was a beautiful technique. “

During the interview, Masvidal praised Usman’s skills and admitted Usman may be “bored with beating me,” but he said he still wants one more title run.

“I’ll definitely fight again this year; I have to,” Masvidal said. “I wanted to compete a lot. If I can at least get one [more] fight this year, I’ll be happy. If I can get two, which is doubtful, that would be cool.”

One name that surfaced as a possible opponent was Nick Diaz, who was in attendance Saturday. Diaz has talked about avenging Masvidal’s win over his brother, Nate Diaz, in November 2019. But Masvidal said he’s going to take it easy for a while and won’t rush back.

“Nick is a stud. But I’m going to do it on my time, I don’t care who it is,” Masvidal said. “I’m not going to do that right now, but if Nick does want to fight toward the end of this year, what can I say, I’m here.

“If you want to do right for your brother, let’s go. I heard he wasn’t too keen on what I did to his little brother, and neither would I. I feel for Nick in that situation, I know what I would want to do if someone did that to my little brother. So let’s go.”