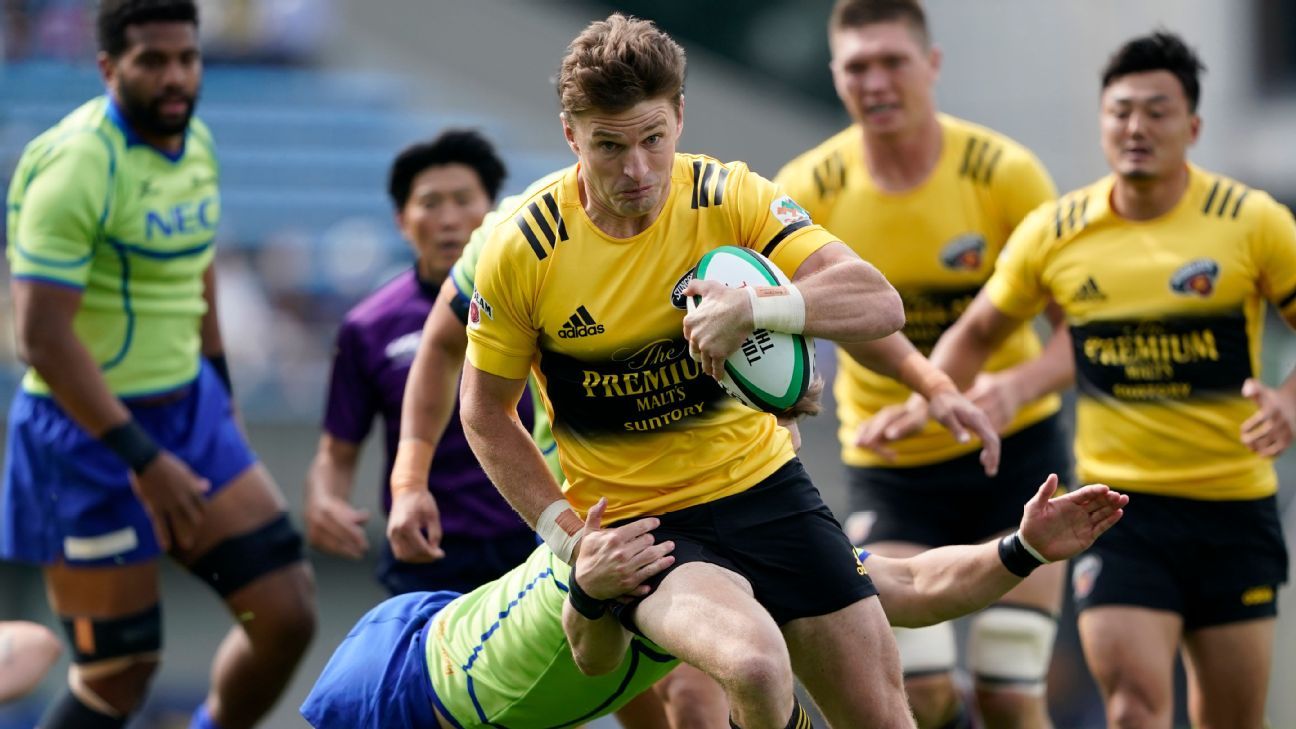 All Blacks superstar Beauden Barrett has reaffirmed his desire to return to the No. 10 jersey at Test level, declaring his time in Japan with Suntory Sungoliath has motivated him to become better than ever in the playmaking hotseat.

Barrett, a two-time winner of World Rugby’s Player of the Year award at fly-half, has for the last two years spent most of his time in the black jersey at fullback. In a move first created under former New Zealand coach Steve Hansen, Barrett was switched to the custodian position to help accommodate Richie Mo’unga and the “twin playmaker” system.

Hansen’s replacement, Ian Foster, then continued the partnership last year with mixed results, after Jordie Barrett, Will Jordan and Damian McKenzie had all exhibited outstanding form in Super Rugby Aotearoa.

The trio have continued their excellent play this season while Beauden Barrett has been away on a playing sabbatical in Japan, where, playing at fly-half, he has helped Suntory to the Top League playoffs.

Looking ahead to his return to New Zealand — which he confirmed would see him play no part in the crossover trans-Tasman Super Rugby series — Barrett doubled down on previous comments, including in conversations with Foster, that it is his wish to play fly-half for the All Blacks.

“I’ve always wanted to be team first [but] I guess this 10-15 thing has been a system selection,” Barrett told reporters on a Zoom call.

“I’ve got no doubt I wasn’t the best out and out No. 15 for the All Blacks, especially with Jordie [Barrett] and Damo [Damian McKenzie] around last year. But the way we wanted to play I could understand that and I bought into that.

“But going forward there’s no hiding from the fact that Damian and Jordie and Will [Jordan] are all playing great rugby.

“But regardless of that I’m really enjoying my time playing No. 10 here at Suntory. It’s given me that burning desire to be better than what I have been before in the All Blacks No. 10 jersey.”

Mo’unga, too, continues to play exceptional rugby for the Crusaders in Super Rugby Aotearoa, the playmaker and his teammates resting up this weekend before they host the tournament final, and chase a fifth straight Super Rugby title, against the Chiefs in Christchurch on Saturday week.

Foster will likely keep his cards close to his chest ahead of this year’s Test season, but there is no doubting that the form of Jordan, McKenzie and Jordie Barrett will put the Mo’unga-Beauden Barrett combination under its most significant pressure yet.

Barrett will however return to New Zealand after a full season at No.10 in Japan in time to join the All Blacks for a camp before they face Italy and Fiji in July, COVID and border issues pending.

“I’d fully back myself,” Barrett said. “Obviously we have a two-week quarantine period when we have to maintain fitness levels and then two or three weeks before our first game if we are selected in the All Blacks.

“There’s a camp thrown in there before that happens. I’m sure that if I’m selected in this squad coming up then through training in an All Black environment I can get myself up to that Test match intensity.

“We’ve been playing a lot of rugby up here. Fitness won’t be an issue.”

Meanwhile, two players who Barrett won’t confront during the Bledisloe Cup later this year — pending an about face from Wallabies coach Dave Rennie on the updated Giteau Law — will be former Test stars Sean McMahon and Samu Kerevi.

Playing alongside the Australian duo at Suntory, Barrett did however confirm he had engaged in conversation with both Kerevi and McMahon about their desire to again represent Australia and perhaps even return in time to make a bid for World Cup selection in 2023.

“It’s been great to play with Seany and Samu; Samu ran over me at training last week and dinged my neck, [and] that wasn’t the first time that’s happened either.

“Unfortunately he hurt his knee on the weekend and will be out for [a little while.]

“But both have shared their desires to go back for another World Cup and it’s definitely in them, I guess they just have to work it through with [Rugby Australia]. There’s also young Harry Hockings who is pretty keen on that, too.

“So yeah a lot of good promise here at Suntory when it comes to the Australians and they’re key players for us.

“I’m quite happy if Seany and Samu stay here [in Japan] though because I know how good they are.”