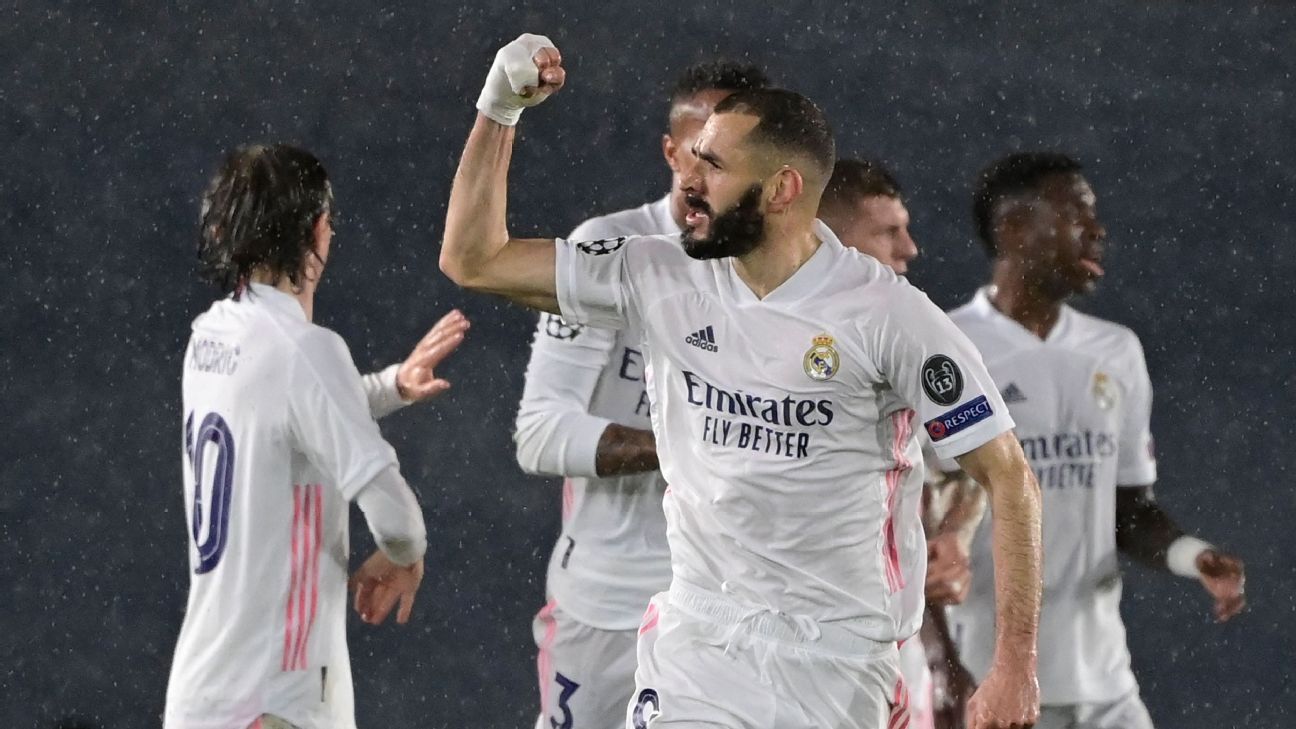 While he doesn’t attract as much attention as some of his contemporaries, Real Madrid striker Karim Benzema continued to write his name into the Champions League history books against Chelsea.

After Madrid fell behind early on when Christian Pulisic created his own piece of history by scoring the opening goal, Benzema scored to salvage a 1-1 draw for the home side in the first leg of their semifinal on Tuesday.

The French striker volleyed home from close range in the 29th minute to level the score at the Estadio Alfredo Di Stefano, further etching his name into the annals of greatness for his club and European football.

With that goal, Benzema became only the fifth player to register 20 goals or more in the knockout phase of the competition, joining Cristiano Ronaldo (67 goals), Lionel Messi (49), Robert Lewandowski (26) and Thomas Muller (24).

It also took Benzema’s overall Champions League tally to 71 goals, level with Real legend Raul in the all-time standings — only Ronaldo (134), Messi (120) and Lewandowski (73) have scored more in the competition. Unlike any of those players above him, however, all of Benzema’s goals have come from open play.

He has also managed to score more Champions League goals (15) than former strike partner Ronaldo (14) since the latter left Real to join Juventus in the summer of 2018 after the pair had won their fourth Champions League together.

Even by his standards, Benzema has hit a rich run of form in recent weeks having had a direct hand in 15 goals during his last 14 appearances for Real across all competitions (13 goals and two assists). As if to highlight his efficiency in front of goal, Benzema scored with Madrid’s only shot on target all night against Chelsea. This purple patch has not gone unnoticed by his manager, with coach Zinedine Zidane praising his compatriot after the Chelsea match by saying:

“Karim is amazing and I am happy for him, but I am not surprised for what he is doing every game.”

Madrid-based newspaper AS were also full of praise of the forward’s influence heading into the second leg, declaring “Benzema is the hope!” on their front cover. They went one step further on Instagram, posting a mocked-up image of him holding what looks like the Ballon d’Or and posing the question: “Has the year of Karim arrived?”

It would appear that the faith is not misplaced, with Benzema having proven himself incredibly effective when it comes to the business end of major European knockout tournaments. Once again, only Ronaldo (13 goals), Lewandowski (7) and Messi (6) have scored more times in Champions League semifinal games than the former Lyon forward (5).

Aged 33 and 129 days, Benzema is now also the oldest Real Madrid player to have ever netted at this stage of the competition, proving that the advancing years are not hampering his abilities quite yet.

Chelsea are also the 33rd different team that Benzema has scored against across his 16 seasons playing in the Champions League — another position he shares with Raul. The duo sit joint-third in the overall running. No prizes for guessing which two players occupy the first and second rungs: Messi has scored against 36 teams, Ronaldo 35.

Benzema’s record stands at six goals in nine Champions League appearances so far this season, with 28 goals in all competitions, while his grand total since signing for Real Madrid in 2009 stands at 277 goals and 142 assists in 553 games.

In any other era he’d be regarded as a titan and yet still somehow arguably he remains underrated by the majority. Those who know, know.