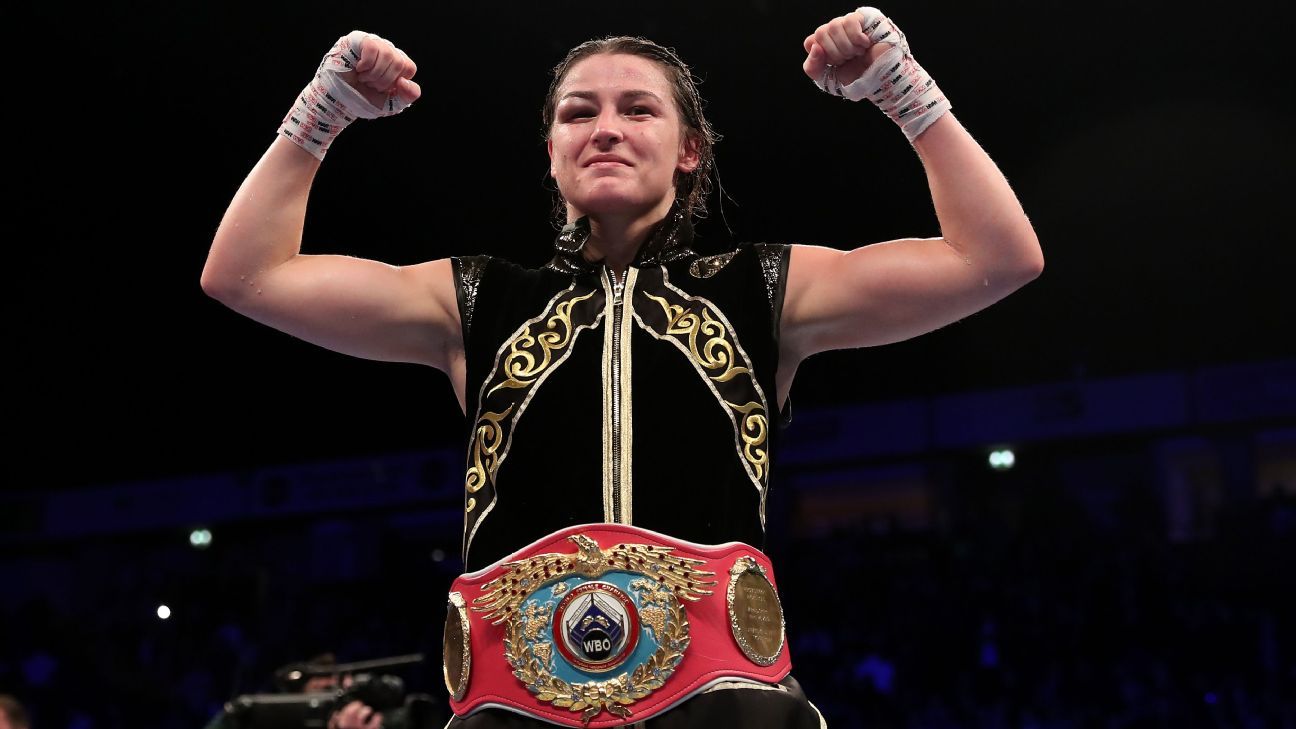 Katie Taylor’s faith — in God, in her fists, in herself — is famous, and maybe infamous. Her drive and determination to be the best, at whatever she was doing, is respected the world over. It isn’t something Taylor developed only in recent years as she climbed to the top of women’s professional boxing. The Olympic gold medallist and undisputed lightweight champion — she’ll face Natasha Jonas on May 1 in a rematch of their epic quarterfinal fight at the 2012 Olympics — knew from the time she was a teenager how to act if you wanted to be the best.

When Taylor was just 14, she was called into the Irish national football set-up. She competed with the Under-17 side for a year before being jumped to the Under-19s. Taylor managed to maintain a top-level footballing career while she continued to advance her true passions in boxing. When she was called into Ireland’s senior squad in 2006 for a World Cup qualifier, she’d already won her first European Boxing Championship and AIBA Women’s World Boxing Championship gold medals.

Over her amateur career, Taylor won gold in five world championships, six European Championships and five EU Championships. She was instrumental in getting women’s boxing introduced to the Olympics for the first time in 2012 — something she’d talked about doing for years — and repaid the favour by winning the gold medal.

When she turned professional in 2016, it was with the support of one of the most powerful men in boxing — Eddie Hearn. The pairing has always been an unlikely one, but undeniably effective. Taylor is there for the theatrics, she’s there to win and Hearn is happy to support that. Taylor’s had 17 wins and no losses in the five years since turning pro, and looks to extend that run on Saturday as she defends her undisputed women’s lightweight championship against England’s Natasha Jonas at Manchester Arena.

Taylor’s success is a direct result of the work she’s put into sport from a young age.

“Not a lot of people have what Katie has. World-class people have it. You just don’t lose,” former Ireland teammate Olivia O’Toole tells ESPN.

Football and boxing were never mutually exclusive activities. Taylor’s football training meant she was incredibly fit, and she has said in the years since that her boxing allowed her a strength on the pitch that others didn’t have.

“I was just into all sports really,” Taylor said when she was 21. “I was a very sporty child. Football was my first love. I started football before I even set foot inside a ring.

“The football is great for me as well in between boxing,” Taylor continued, in the 2008 interview. “In between tournaments when I have a break, I always go back to football. It’s a great change for me and it’s great to use different muscles as well. It’s a lot more relaxing than boxing. With the boxing, I’m always under a lot of pressure but with football, it’s nice and relaxing and I can just enjoy being around the girls and playing football.”

As with most girls who wanted to play football at that time, Taylor cut her teeth playing on boys teams while also competing against them in the ring. Two years ago, a video went viral showing a young Taylor on the football field wiping out an opposition player. Dating back to 1998, Taylor was playing with boys’ side Newton Juniors and put in a crunching slide tackle from behind as Cherry Orchard’s Kenny Hammond attempted to get the ball around her in the Wicklow and District Schoolboys League. That season she won “Schoolboy” of the Year for the league.

“She was the best player they had by a mile — that’s no disrespect to the lads,” Hammond told the42.ie in 2018. “But she was half-decent. She could play a bit of ball. And she was up against a good Orchard team. She raised her game when she came up against the big boys.”

Former Ireland teammate Marie Curtin remembers seeing Taylor at underage tournaments and being warned that she was a player to look out for.

“She was aggressive. She didn’t hold back. She was good at one-on-ones. She was fast. She was a great distributor of the ball. She was a great passer of the ball,” Curtin tells ESPN. “She had a really good, all-round style of play. She just had razor sharp focus. Knowing her around camp, you just got a sense of the type of attitude she had.”

Taylor’s attitude and work ethic are notorious. Despite her default, soft-spoken demeanor, she is a fierce competitor once the bell rings — and on the pitch, it was no different.

“I remember really clearly the focus she had. She was a really focused player. She believed she could win every game,” Curtin adds.

“I remember part one of the last games I played with her, we roomed together in Italy. We were both very young. Just talking about the game beforehand with her, we were against the Italians and they were a higher ranked team. She just had such a belief we were going to win. It showed the belief she had and the focus she had. She was absolutely convinced.

“She scored an absolute screamer from 30 yards out, about 10 minutes in. She got booked and sent off in that game. For such a young player and a young talent, just the belief she had. She absolutely set herself apart.”

O’Toole, who captained Ireland for 10 years and remains the team’s all-time top scorer, recounts similar tales of Taylor. She first came across the “baby-faced” 16-year-old at an international camp where younger players were being introduced to the more senior players.

It was a prescient statement from Taylor. Years later, O’Toole and Taylor would carry the Olympic torch together through Dublin as part of its relay to London 2012, ahead of the first boxing competition at the Games — they were sharing in that history, but excelling at the top of two different worlds.

“Katie is so shy. When we were on the buses [to games and training] she wouldn’t say anything,” O’Toole says. “Me and Katie carried the Olympic torch together, and she was so nervous, pulling on me all nervous like ‘Olivia, Olivia, Olivia.’ To me! I should have been like that with her.”

It was the type of moment Taylor had envisioned from her earliest boxing ambitions. While she was a committed athlete in her football days, there was never any doubt in anyone’s minds that she wouldn’t pursue boxing full-time at some point. O’Toole says Taylor would let every manager know that boxing was her priority.

“She did miss training sessions. She’d turn up Sunday morning play and then go back to boxing on Monday,” O’Toole adds. “She did it [football] as a hobby, but she was so good it didn’t matter.

“When at camp, she used to get up in the morning, do her boxing and then come to breakfast with us.”

Both women are in agreement that if Taylor had stuck with football, she would have played professionally alongside the likes of Arsenal’s Katie McCabe and North Carolina Courage’s Denise O’Sullivan as top Irish players in the world’s top leagues.

“To me, Taylor was the definition of Roy Keane. No keepy-uppies or anything fancy like that. She was just running and working hard,” O’Toole says.

Curtin is adamant that Taylor has been blazing a trail since she was that shy 16-year-old getting up early to do her boxing practice before returning to football, a trail she continues to clear as her legend in boxing grows.

“She hasn’t just turned into a role model,” Curtin says. “She has been a role model for so long. She was winning European and world championships in boxing before she was recognised properly. She is just a fantastic role model.

“Everyone I know who knows Katie will comment on it. She is just an amazing human being. There’s not too many in the world like her. She is someone who deserves the best, and the best recognition.”