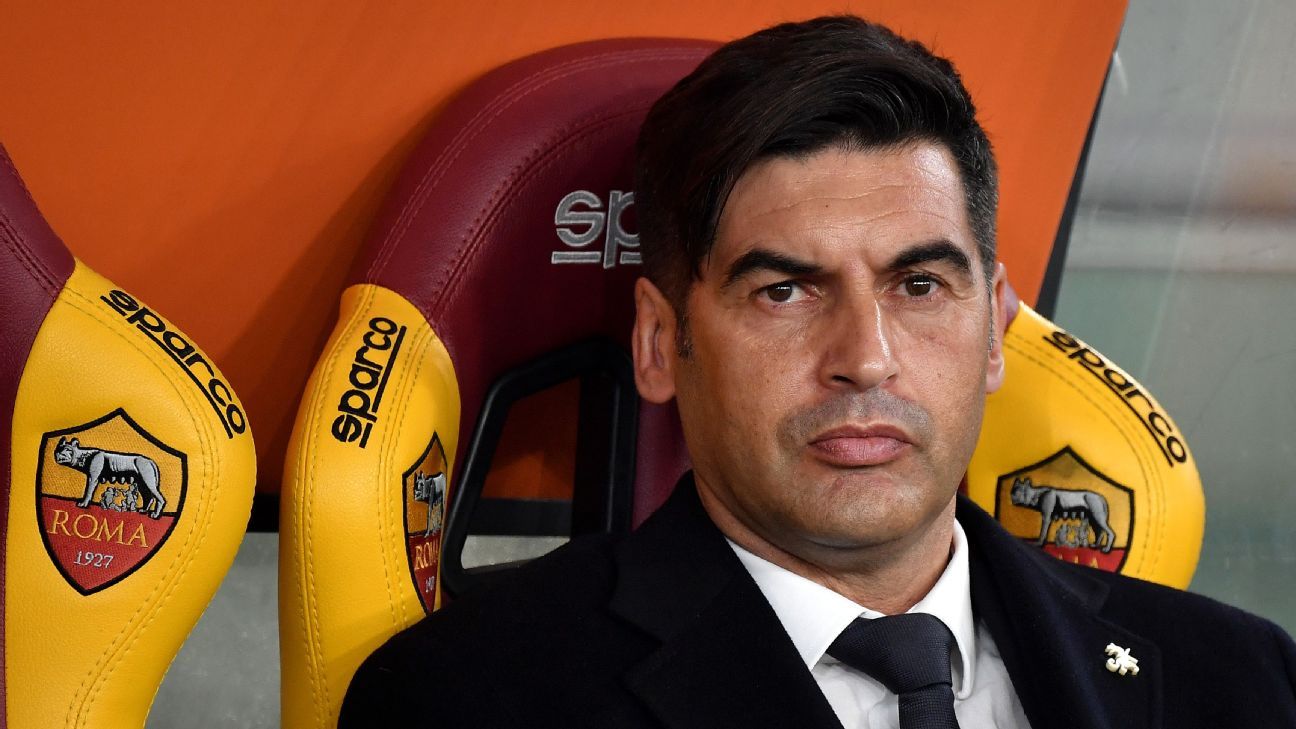 On Thursday, AS Roma travel to Old Trafford to face Ole Gunnar Solskjaer’s Manchester United in the Europa League semifinals. ESPN’s Gabriele Marcotti caught up with Giallorossi manager Paulo Fonseca, who shared his thoughts about the task ahead, Roma’s campaign and a fundamental tactical change he’s seen in the European game.

Fonseca: Yes, of course. And we’re excited! It’s a big opportunity for the club first and foremost, but also for the city and for the players. Not everybody gets a chance to face Man United in a European semifinal.

ESPN: It strikes me that you’ve had so much to deal with in the past nine months. In addition to working through the coronavirus pandemic, like everyone else, you’ve had new owners take over and were without a sporting director until January; until the end of the transfer window last September, it looked as if Edin Dzeko, your captain at the time and centre-forward, was leaving; he stayed, and then there were issues with him and he was stripped of the captaincy. Your team was punished twice for bureaucratic mistakes, first when Amadou Diawara was incorrectly registered, then when you incorrectly made six substitutions in the Coppa Italia. You lost arguably your best player, Nicolo Zaniolo, before the season even started and he hasn’t played a minute; you’ve also had to deal with so many other injuries to key men, from Chris Smalling to Pedro to Henrikh Mkhitaryan. Have you ever faced a challenge like this?

Fonseca: It’s been a new experience for me, and yes, it was difficult to manage all of these situations. The injuries are especially so difficult to manage, particularly because they came in crucial moments — like [the one suffered by] Mkhitaryan. And, of course, we’re playing every three days. I’d also add that Serie A is a tough, competitive league, where we’re fighting with seven other clubs for a place in the top four… and we were in the top four until the latest injuries in March, and we dropped out. So this trophy, for us, is so important.

ESPN: Let’s talk about Man United. I see a team that has very fast, talented attackers, but has perhaps struggled a bit when opponents sat deeper, looking mostly to defend and hit them on the counterattack. But you don’t play that way, do you?

Fonseca: No, I don’t like playing deep and waiting for the counterattack. Sometimes it can happen in moments with my team, like against Ajax in the second leg of the quarterfinal, but it is not my style of play. But you’re right, they have so many strong attacking players like Edinson Cavani, Marcus Rashford, Mason Greenwood… Daniel James, who is very fast. These are amazing players who can decide the outcome of a game in one situation, in one second. So we have to be prepared, but, I have to confess, we can’t go there just to defend. We have to have the ball, we have to have the initiative, we have to have the courage to go out and play against Manchester United.

The key is not to let them attack us with speed and to defend far away from our box.

ESPN: You like to keep a higher line and keep the ball and defend high up the pitch, but it has also cost you dearly in games and you have often blamed individual mistakes …

Fonseca: I think [when we’ve had problems] many times, it hasn’t been because other teams created situations against us. It’s because we made mistakes, losing balls in the first phase of play. And I think we paid more dearly for those mistakes than is normal, and that has been our biggest problem. Because yes, this type of game that we play can be risky, but in the long run I believe it is successful.

ESPN: Bruno Fernandes is one of United’s key players. Were you surprised that he only really received a lot of attention when he moved to Sporting? Normally talents like his are spotted earlier in a career.

Fonseca: Bruno is amazing, for what he did at Sporting and for what he’s doing at United. He did arrive a little late, but he learned so much before Sporting, developing in Italy (at Novara, Sampdoria and Udinese).

What I find remarkable is his personality. He has a lot of quality, but he is also a leader, a fighter and so, so smart. I’m not surprised that from the moment he arrived at United, he became a leader on that team.

ESPN: Still, it seems strange to me that, with all the money and resources people spend on scouting, a guy like Bruno didn’t get signed by a big team until just before his 23rd birthday. It has been suggested that maybe he needed smaller teams to develop properly, because he wouldn’t have had space in a big side.

Fonseca: I have to confess, it’s not easy to give young players opportunities when you’re at a big team with big expectations. There is a lot of pressure; you need a young player with the right character and right personality. We have that with [Nicolo] Zaniolo (who became a regular in the AS Roma first-team at 20 years old), for example. He is so courageous, so strong-willed. That’s why you don’t see many very young players playing regularly for big teams. But it depends on the character of the individual. When I see a guy with character and personalty to go with his talent, his age doesn’t matter to me.

ESPN: In United’s past few games, we’ve often seen Paul Pogba play wide left in a 4-2-3-1, rather than as a traditional midfielder in a two or a three. It’s the eternal debate of individuals vs. systems. What is your view?

Fonseca: Both are important, of course, but the system should always respect the qualities and characteristics of the players. If Pogba is in that role, he will play it differently than if a traditional winger is in that role. The dynamic will change, for his team and for the opponent. If you get it right, then it’s a positive. I think right now the game is becoming increasingly strategic, managers are making subtle changes in game after game to try to gain an advantage. And it’s the right thing to do. You should approach every game a little bit differently; you should try to create doubts in the mind of the other manager.

ESPN: Tell me something that has surprised you tactically in Serie A, or in football in general.

Fonseca: Well, every game in Serie A is a big challenge tactically, because managers are always trying to gain an advantage. One thing we’ve seen is teams like Atalanta, Verona and Bologna, who play man-to-man all over the pitch. And it’s not just in Italy. Marcelo Bielsa and Leeds United did it on Sunday against Manchester United, marking man-for=man and doing it deeper than they usually do. It was very difficult for United in that game, and it’s difficult for us when teams do it to us in Italy.

ESPN: Do you think this could be a trend? Because since the 1990s, everybody in soccer has tended to defend zonally.

Fonseca: Football evolves over time, of course, but it’s also cyclical, and I wonder if we’re returning to the past a little. You see many teams switching to man-to-man, either for the whole game or in certain situations. And it’s different, because when I was playing and developing as a coach, it was all about pressure zones and defending collectively. I am not a fan of man-to-man; it’s not my brand of football, but it does get results. And you have to know how to play against it, otherwise against certain teams, you won’t be able to play your game.

ESPN: Final question on the subject that everybody has been talking about for the past 10 days: the Super League.

Fonseca: When I saw the news, at first I was very worried, but now I’m very proud — proud to be part of football. I think we gave a big example to the world, to society. The most important thing is supporters. I understand the biggest clubs want more money, but they’re also the ones spending the most money. They’re the ones paying 100 million euros for players. And this creates a problem for smaller clubs. It’s egotism on their part.

So I thank the supporters, the players, the coaches, everybody who stood against this. If the Super League had happened, it could have killed real football. And I think to what happened in England, seeing the supporters on the street, making their voice heard, and it was amazing. I am so proud of them, and I have to say thank you.