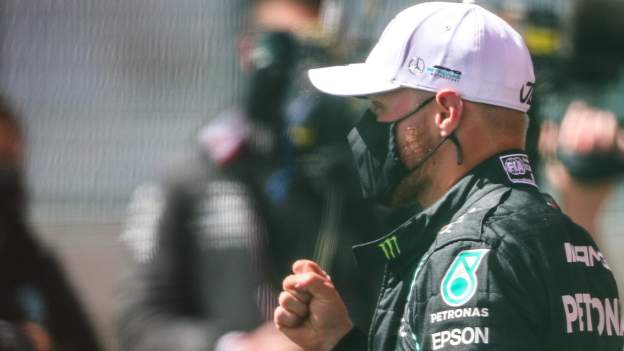 Valtteri Bottas butted in on the Lewis Hamilton-Max Verstappen show in qualifying at the Portuguese Grand Prix, adding a new dynamic to the unfolding narrative of the 2021 Formula 1 season.

A slightly bizarre qualifying session in changeable, windy conditions ended with the Finn pipping Hamilton to pole position by just 0.007 seconds; the seven-time champion setting a lap 0.38secs faster than anyone else managed all weekend but failing to repeat it when it mattered; and Mercedes turning Red Bull’s performance advantage so far this year on its head.

It was hard to work out at the end of it all what was the most surprising aspect of the afternoon, but perhaps the most striking was Red Bull’s sudden lack of pace.

Mercedes back on top

Notwithstanding Lewis Hamilton’s pole position at the last race at Imola, there is no question that the Red Bull was the fastest car over one lap at the first two races of the season. That has not been the case at Portimao.

Hamilton set the fastest lap of the weekend, a one minute 17.968 seconds in the second part of qualifying, when he was 0.5secs clear of the field.

He never got close to that in the final part of qualifying – and nor did anyone else. It’s true that Verstappen set the fastest time in Q3, a 1:18.209, but he had that ruled out for a track-limits transgression. And his next lap was only an 18.746, which was a good 0.4secs from Bottas’ pole.

The world champions have their first car upgrade of the season in Portugal. But even so Hamilton admitted this level of performance from Mercedes was “not expected”, and Bottas said that after struggling in qualifying in the first two races of the season, his pace “definitely put a smile on my face”.

It would be wrong, though, to draw any definitive conclusions from this, because it has been a funny sort of weekend, with a gusting wind causing conditions to change frequently on a track with very low grip and tyres that Hamilton said were too hard for it. Very few drivers felt they had optimised their performances.

Certainly, Mercedes F1 boss Toto Wolff was not taking anything for granted – even if he did acknowledge that his team had made significant progress.

“I’m not sure we had the fastest car but we made a big step forward,” Wolff said.

“We had an 18.2 from Max deleted because of track limits. On other side, Valtteri had a very good first lap in Q3. So I would say we caught up a lot in qually. Maybe (we were) on par. We think we have a good racing car.

“What was the turnaround? Just crunching numbers, running in the simulator, trying to understand where the deficits lie, just chipping away and dissecting all the gaps. Contrary to what the belief is, there is never one silver bullet.”

Be that as it may, from Red Bull’s point of view, this must be a slightly concerning development.

Mercedes were clearly out of sorts in pre-season testing, and struggling with their car’s handling both there and at the first race. But still Hamilton leads the championship after two races, and now Mercedes have their first front-row lock-out of the season.

It was not this that informed Verstappen’s unhappiness through the weekend in Portugal, though – that was focused on the lack of grip from the track.

“I didn’t enjoy one single lap this weekend, just because of the state of the track,” the Dutchman said. “The layout is amazing but grip we are experiencing, I don’t think it’s nice. I know it’s the same for everyone, but for me personally, it’s not enjoyable to drive.”

In the context of Mercedes’ step forward in qualifying performance, the obvious question is whether this will carry forward into the race.

Hamilton and Verstappen have been so closely matched over the first two races that it is impossible to say which team has had the quickest race car. Will that remain the case on Sunday?

“We’ll try to fight them in the race, see what we can do,” Verstappen said. “It’s not so easy to follow here but if we have good pace then for sure we’ll put the pressure on.”

It’s only three races into a theoretically 23-race season, but there is a lot at stake on Sunday. Particularly for Bottas.

The Finn needed this pole. After a weak performance in Imola, culminating in a crash with George Russell’s Williams, he is already 28 points – more than a win – behind Hamilton in the championship, and his hopes of challenging for the title are in danger of being over before they started.

If he does not beat Hamilton on Sunday, they pretty much will be.

The good news story of the weekend was the performance of Alpine, the former Renault team, who had had a difficult start to the season.

Problems at their factory over the winter affected their aerodynamic development, and the car has been towards the back of the midfield in the first two races.

But new parts introduced over the last two weekends, and some number-crunching, led to a big step forwards in Portugal, and Esteban Ocon starts a very promising sixth on the grid.

Both he and team-mate Fernando Alonso have looked competitive all weekend – and closely matched. Until qualifying, that is, when the two-time champion’s pace fell away, and he ended up down in 13th, nearly a second off the Frenchman and failing to progress beyond the second part of the session.

Alonso was seeing the positives, though. Being outside the top 10 gives him a free tyre choice for the start of the race. That means he can choose the mediums, the favoured race tyre, which of the top cars only the Mercedes and Red Bulls and Charles Leclerc’s Ferrari were quick enough to progress through Q2 on.

“From P3 to Q1 we lost quite a lot of the feeling of the car and the performance of the car,” Alonso said. “That was a bad thing. We are still investigating what could be the reasons to lose one second on the pace.

“But nothing we can do now, and I’m still quite happy with everything this weekend. The car feels much better, much more alive and very competitive in all the sessions, so it was a very big step forward for us.

“Maybe we are not in the position we should be but at the same time we have the free choice of tyre and that may be better for the race in a way as a team to have two possibilities with the two drivers. It was a very, very positive weekend.”

Alonso was not the only one to be mystified by a lack of grip in qualifying – Daniel Ricciardo at McLaren and Lance Stroll at Aston Martin were both knocked out in the first session, while team-mates Lando Norris and Sebastian Vettel made it into the top 10.

Like Alonso, they were somewhat mystified by the sudden lack of pace.