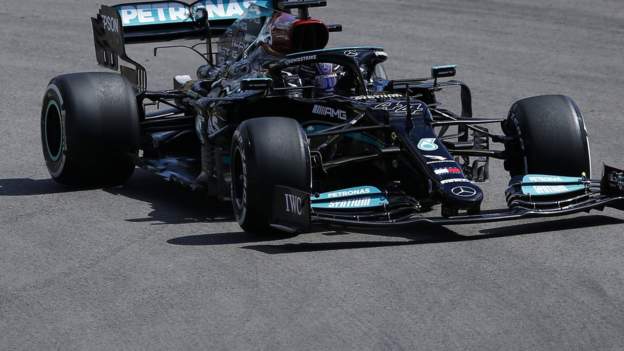 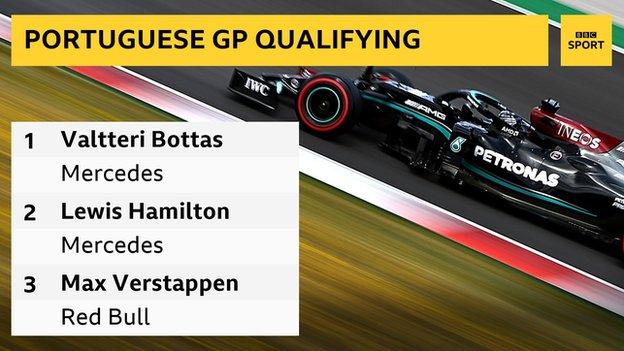 Bottas beat Hamilton by 0.007 seconds, but Red Bull’s Max Verstappen had a faster lap ruled out for exceeding track limits.

And Hamilton set a much faster lap in the second part of qualifying, 0.4secs quicker than the eventual pole, but could not match it when it mattered.

Verstappen salvaged third with a final attempt, just under 0.2secs off Bottas.

Verstappen’s team-mate Sergio Perez took fourth place, ahead of the Ferrari of Carlos Sainz and the improved Alpine of Esteban Ocon, for the team’s best qualifying performance of the year so far.

Ocon’s team-mate Fernando Alonso, quick on the first laps of the first session of qualifying, faded after a spin at the end of that session, and could manage only 13th on the grid.

And Daniel Ricciardo was even worse off in the McLaren, knocked out in first qualifying and 16th, with team-mate Lando Norris seventh ahead of the second Ferrari of Charles Leclerc.

Why did that happen?

While the result might look familiar to followers of F1 over the last couple of years, the way it came about at Portimao was unusual in the extreme.

And it seemed a change of wind strength into the final session was enough to turn things around.

Hamilton had done a stunning lap of one minute 17.968 seconds in second qualifying, half a second clear of the field, but no one was able to get near that in the final session when it mattered.

And Bottas’ pole time was set on his first lap, as neither Mercedes driver was able to improve when they switched to the medium tyre for their final runs, even though they both preferred its feel.

They, the Red Bulls and Leclerc, though, all have the medium for the start of the race having used it to set their fastest times in second qualifying, which could be a significant advantage.

Bottas said: “It is a good feeling to be on pole. It feels like it has been a while. Qualifying has been the weak point for me in the first two races getting the tyres to work. But we have been working hard and it paid off and put me in a good position for tomorrow.

“The wind picked up in the last run and I couldn’t quite get the temperature in them. Starting with the medium gives us the option to go pretty much as long as we want in the first stint.”

Hamilton said: “Great job by Valtteri and by the team to end up on the front row – that was not expected this weekend.

“Not the perfect lap. But I gave it everything.”

Verstappen has been complaining of a lack of grip all weekend, a combination of a relatively hard tyre selection by Pirelli and the low-abrasion track surface, and said it had been “not a lot of fun to drive”.

He was not helped by encountering Sebastian Vettel’s Aston Martin at the final corner as he started his final lap.

He added: “Qualifying was very difficult to drive, struggling a lot with the grip. That first lap was decent but I had a bit of a moment in Turn Four and went a bit off track.

“I was confident we could improve but a car in front it disturbs you, and with the low grip and the wind it cost me a lot of lap time.”