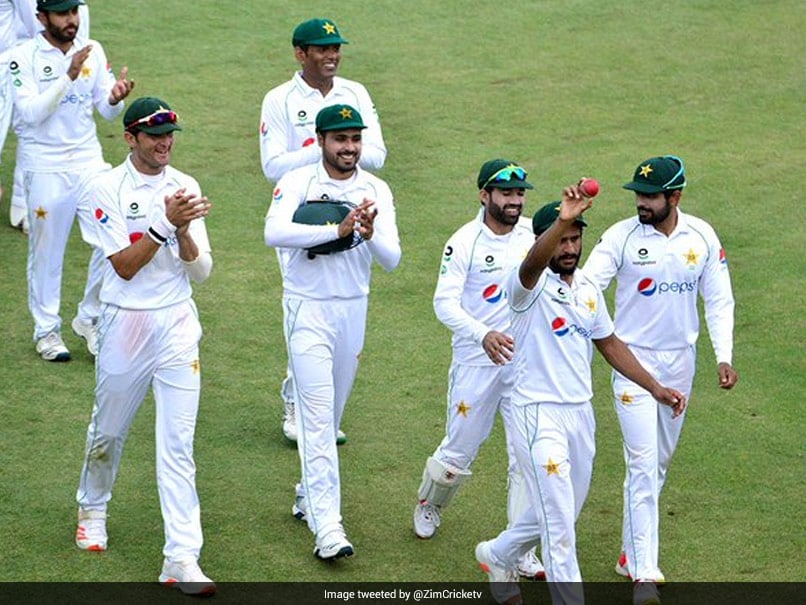 Fast bowler Hasan Ali registered career best figures of 5/36 to lead Pakistan to a comprehensive innings and 116 run annihilation of Zimbabwe in the first Test in Harare on Saturday. The 26-year-old finished with 9/89 in the match as Zimbabwe’s batting crumbled for the second time in the match, all out for 134 with an hour remaining on the third day at Harare sports club. The victory gives Pakistan a 1-0 lead in the two-match series. The second Test is also in Harare from May 7.

Zimbabwe, who were bowled out for 176 in the first innings, were facing an innings defeat at tea with the total at 118/5.

Hasan had already picked up the first wicket of the innings when he had Kevin Kasuza leg before for 28 to end a promising opening partnership of 48.

After tea he stepped up a gear as he bowled Donald Tiripano for two and Tendai Chisoro, caught in the slips off his second ball for nought, to mark his 50th wicket in Test cricket.

That opened up the tail and Hasan ripped through them too, hitting  Blessing Muzarabani‘s leg stump as the Zimbabwe pace bowler tried to slog his team out of trouble.

Finally, he bowled Richard Ngarava off a low full toss and with the last man Prince Masvaure unable to bat due to injury, Pakistan players celebrated the victory. Regis Chakabva remained not out on 14.

It was Hasan’s fourth five-wicket haul in 12 Tests, improving on the 5/45 he took against New Zealand in Abu Dhabi in 2018.

Spinner Nauman Ali earlier picked up the wickets of Milton Shumba and Brendan Taylor before tea to finish with 2/27.

In the morning Pakistan were bowled out for 426 with overnight centurion Fawad Alam the last man out for 140.

Trailing by 250 runs in the first innings, Zimbabwe were off to a solid start before Hasan ran riot.

Openers Kasuza and Tarisai Musakanda reached lunch on 36 without loss and took their partnership to 48 before Hasan provided Pakistan with the breakthrough.

Hasan, who took 4/53 in the first innings, trapped Kasuza, who had already been dropped on 15, leg before for 28 while Nauman had Shumba caught behind by Mohammed Rizwan for four.

A well-set Musakanda was run out for 43 while needlessly attempting a third run. He hit five boundaries in a fighting 84-ball knock.

Stand-in skipper Taylor tried to hit his team out of trouble, smiting two fours and a six in his 29 before holing out to Hasan running back from mid-off.

Earlier, Pakistan were dismissed for 426 after resuming at a healthy 374-6 before Fawad Alam became the last man out for 140.

Alam, who was 108 not out overnight, hit 20 boundaries in his three minute short of five hour batting. He tried to hit Muzarabani to the leg side but edged to wicketkeeper Chakabva.

Hasan used the long handle most effectively in his 26-ball 30 which  included two sixes and three boundaries.

Muzarabani finished with 4-73 while Donald Tiripano had figures of 3-89.