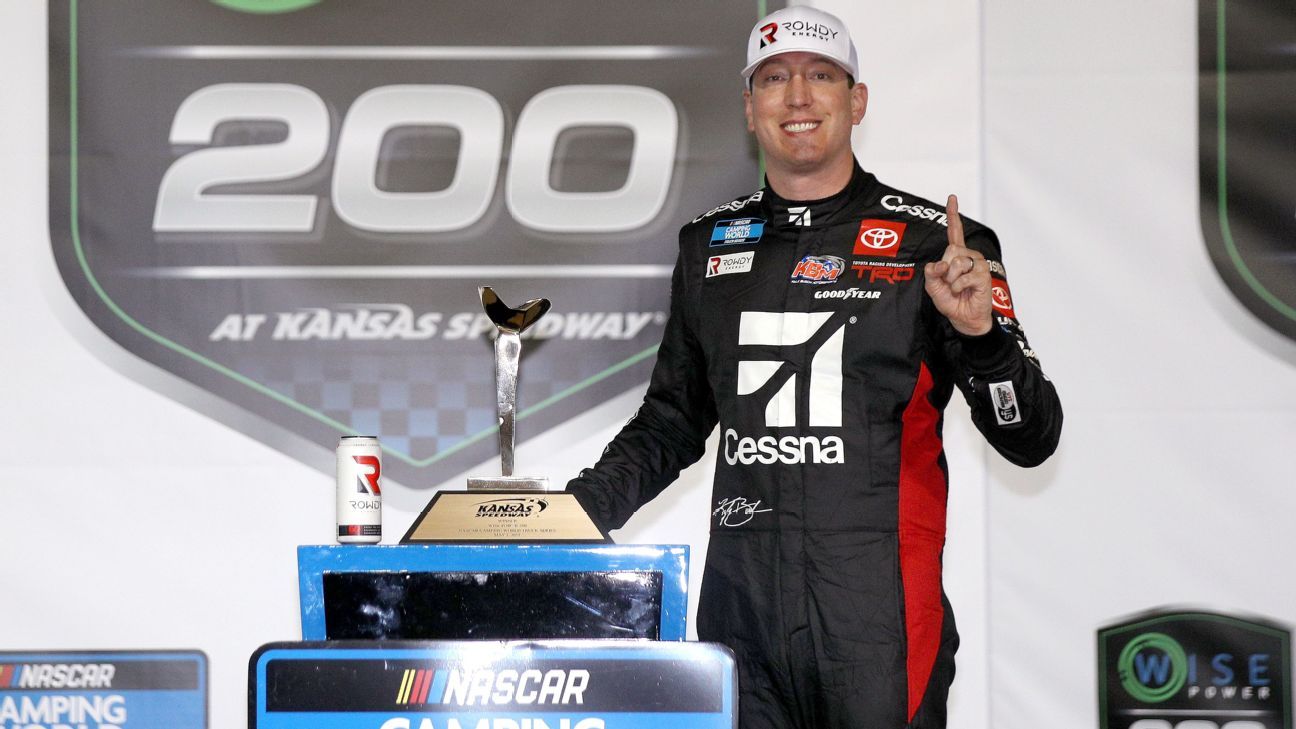 KANSAS CITY, Kan. — Kyle Busch blew a restart in overtime that should have cost him a race he’d dominated at Kansas Speedway. Given a second chance, Busch corrected his mistake and earned the 61st NASCAR Truck Series win of his career.

The win Saturday night was the fifth straight for Kyle Busch Motorsports, and manufacturer Toyota has won all seven Truck series races this year. Busch has won twice this season.

Busch won the first two stages and led a race-high 59 of the 140 laps. He was overtaken by Ross Chastain when the race first went to overtime as Busch struggled to get his Tundra through the gears.

Chastain sailed past Busch and pulled Zane Smith with him as Busch plummeted into traffic. But a spin deeper in the field brought out the caution, set up a restart for a second overtime and gave Busch another chance.

He restarted in the second row behind Chastain and Smith, darted to the top, pulled around to the front of the field and drove to the win by .665 seconds over Chastain. He did his customary bow with the checkered flag to the limited spectators permitted in the grandstands.

Busch, scheduled to race Sunday in the Cup Series race at Kansas, said he struggled with restarts in the truck.

“No restarts went our way, definitely missed something being able to come up through the gears and get going. It just would not go,” Busch said. “It was just slow. Guys would just swarm us.”

Chastain finished second and said he wasn’t unnerved when the race went to a second overtime. He’d just beaten Busch on the first restart and figured, “Let’s do it again.”

He was satisfied with the second-place finish and called it progress for Niece Motorsports.

Austin Hill was third, and neither he nor Chastain thought they had anything for Busch once Busch got past them on the last restart.

“I thought I did everything right on that restart, then on the apron, [I] saw Chastain go up to block. From then on it was a drag race,” Hill said. “He held me so tight down in the corner, it drug both of us back. I wish he would have side-drafted me and went up and blocked Kyle off of four. That way maybe me and him could’ve battled it out for the win, I don’t know. Kyle might have still crossed us over and won the race.”

Toyota has dominated the season behind KBM, although it was Ben Rhodes and ThorSport Racing opening the season with a pair of wins at Daytona. But it has been all Kyle Busch Motorsports since, and its the fourth time in series history that a manufacturer has started the season with six or more wins in as many races.

Toyota holds the Truck series record with 10 consecutive wins to start a season set in 2014.