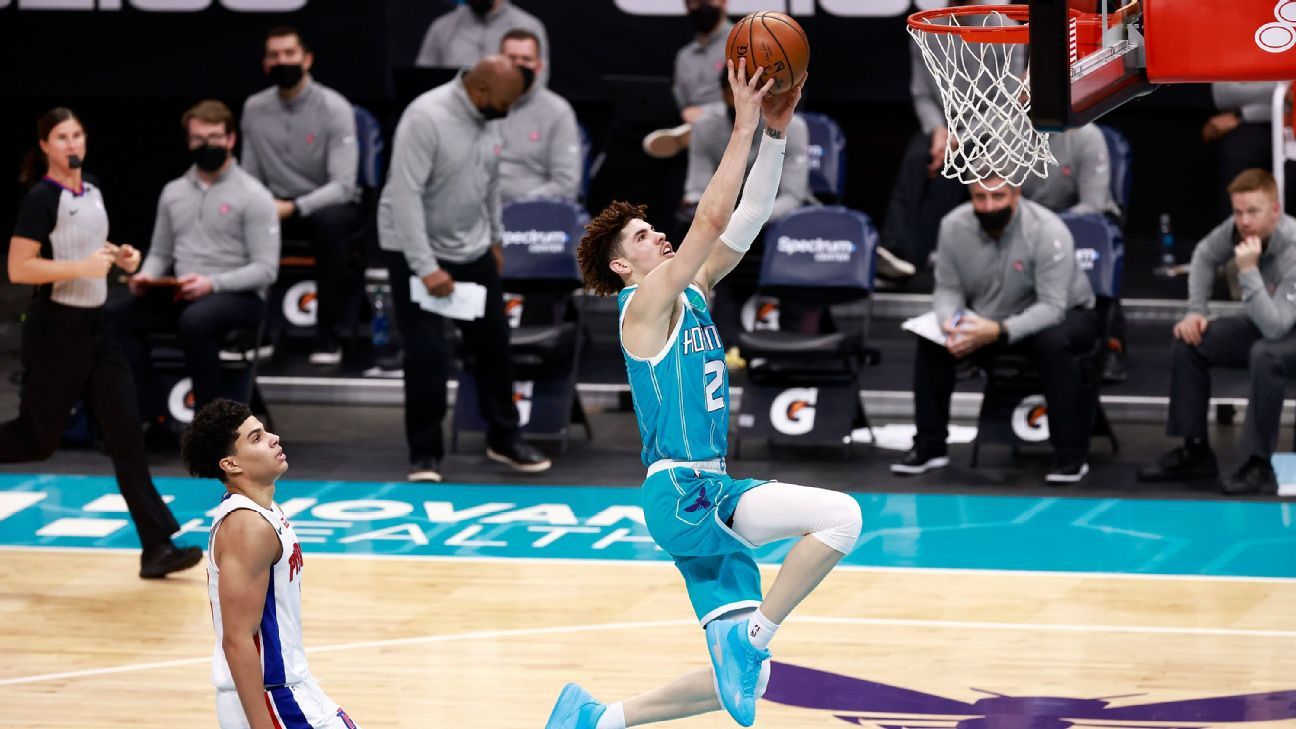 The LaMelo Ball campaign for Rookie of the Year is officially back on.

The Charlotte Hornets point guard dazzled in Saturday’s 107-84 win over the Detroit Pistons, his first game action in six weeks while recovering from a fractured right wrist.

Ball finished with 11 points, eight assists and seven rebounds and Charlotte outscored Detroit by 19 points in the 28 minutes he was on the floor.

It didn’t take long for the 19-year old to make his impact felt as he found Miles Bridges with an assist just 21 seconds into the night.

But that was just the beginning.

His skeeball-style outlet pass to Bridges later in the quarter — an underhand lob that sailed about 80 feet before falling perfectly into Bridges near the basket — caused the Hornets’ excitable play-by-play announcer, Eric Collins, to reach a level of hysteria rare for even him.

“What a pass, finds Bridges! Welcome back, LaMelo!” Collins bellowed on the game broadcast.

Ball started in place of Devonte’ Graham, out with a bruised knee, and helped the Hornets to a crucial win with the playoffs just nine games remaining before the postseason.

Charlotte went 10-11 in Ball’s absence, falling to No. 8 in the Eastern Conference standings, but things were trending south as the Hornets were just 3-8 in their past 11 coming into Saturday.

By the time Ball attempted his first shot — a pretty, driving left-hand layup that he put in the hoop with 20.4 seconds remaining in the first quarter — the first-year point guard had already filled the stat sheet with four assists, two rebounds, a block and a steal in the opening frame.

The Hornets pushed their lead to as many as 21 before the Pistons cut that cushion to three, at 83-80, with 9 minutes, 33 seconds left in the fourth quarter.

Charlotte outscored Detroit 24-14 the rest of the way, with Terry Rozier putting up 14 of his team-high 29 points in the fourth.

When Ball, the third overall pick in the 2020 NBA draft, went out in late March he was widely presumed to be a lock for Rookie of the Year, but his extended absence allowed Anthony Edwards of the Minnesota Timberwolves and Tyrese Haliburton of the Sacramento Kings to make headway for the award.

“LaMelo is deserving of that,” Hornets coach James Borrego said before the game. “I’m glad and I’m thankful that he gets a chance to continue that season in the stretch run. … So, I’m thrilled for him. But, us as an organization, this is a wonderful time for Melo to be centerstage of this thing.”