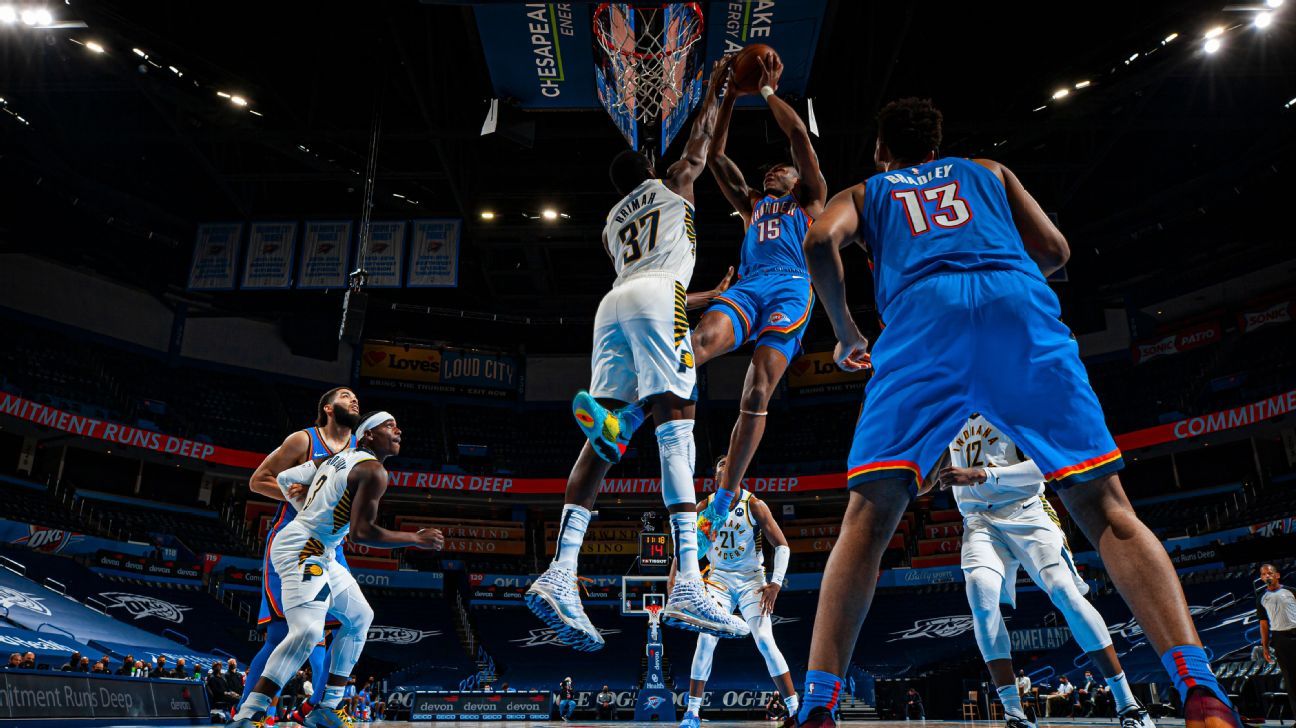 The 57-point margin is tops the previous mark of 56, set by the Celtics over the Bulls in 2018 and the SuperSonics over the Rockets in 1986.

The Pacers led by as many as 67, the largest lead in a game in 25 seasons. The largest margin of victory ever in a game is 68, set by the Cavaliers over the Heat in 1991.

“It’s embarrassing. I’m not gonna try to spin that,” Thunder coach Mark Daigneault said. “We’re still grateful to be playing basketball. Adversity tests the connection of the team. It tests everything. It squeezes you. It shows you who you are.”

The Pacers smashed the Thunder despite not having a number of rotation players including Malcolm Brogdan, Jeremy Lamb, Myles Turner and JaKarr Sampson.

Domantas Sabonis, who made his return from a back injury, had a triple-double by halftime, finishing with 26 points, 19 rebounds and 14 assists in 30 minutes. He’s the fourth player in the last 25 seasons to record a first half triple-double.

“It was a timeout in the second quarter and Myles was like, ‘You need two more!’ and I was like ‘What?’ and then he told me,” Sabonis said. “We just kept playing. Guys were getting open and I was trying to find them and they made the shots.”

Asked if he’s experienced a game like this before where things came so easily, Sabonis said this was a first.

“No, not especially at the professional level,” he said.

The Pacers came out hot and kept a ridiculous shooting pace throughout the game, posting splits of 65.5% from the field and 63.6% from 3, hitting 21-of-33 from deep. “That was a clean uppercut,” Daigneault said. “It’s demoralizing.”

The Thunder, who are in a rebuilding and developmental mindset, played with a roster largely composed of rookies, minimum salaried players and 10-day contracts. They recently broke a 14-game losing streak in Boston and have now lost 16 of their last 17.

The Thunder don’t have long to sit on the blowout, though. They play the current top team in the West on Sunday, the Phoenix Suns.

“I told the guys after the game, you gotta get off your feet, get mentally, physically and emotionally zero and zero tomorrow morning,” Daigneault said. “It’s about turning the page and keeping the guys connected. And getting them back into the next moment and the next game. That’s one we gotta flush.”