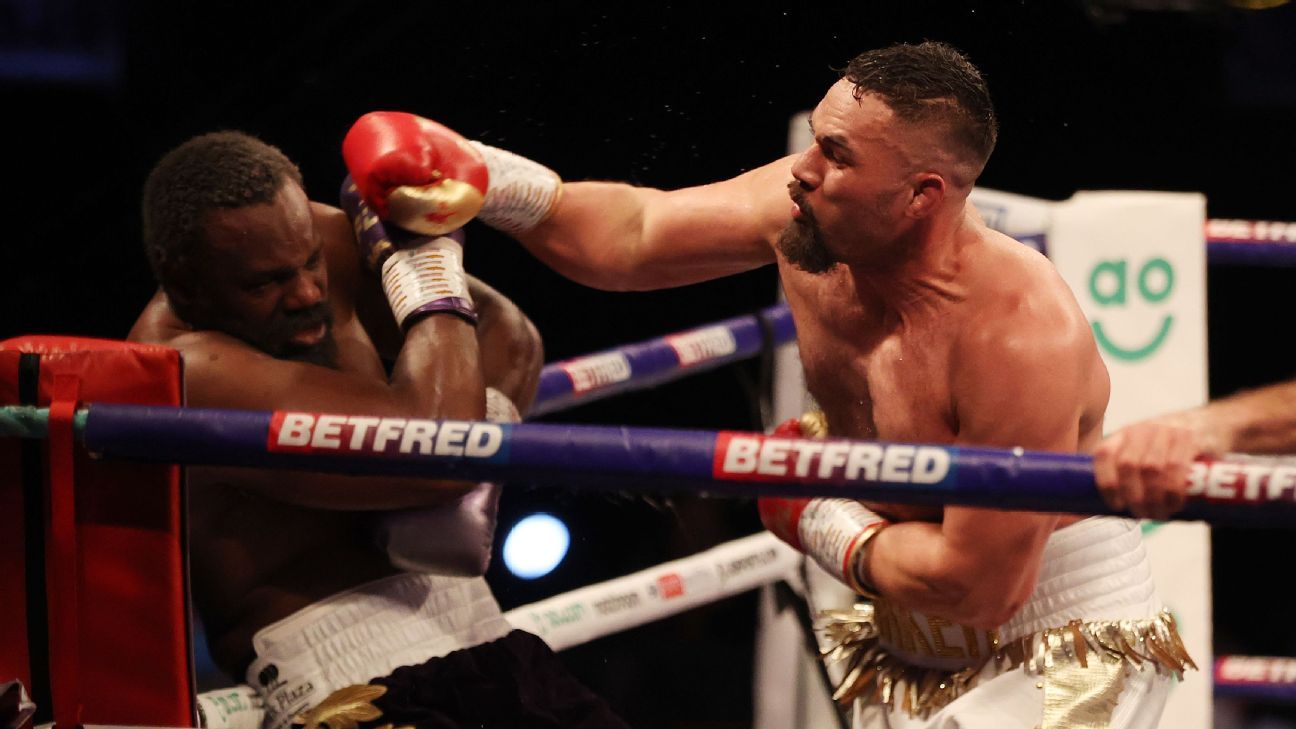 Joseph Parker overcame an early scare to earn a split decision win over Derek Chisora on Saturday, which keeps him in the hunt for a world heavyweight title shot in 2022.

After a disappointing display earlier this year, Parker recovered from a first-round knockdown for scores of 116-111 and 115-113 to 115-113 at England’s Manchester Arena.

Parker went into the fight ranked No. 3 within the WBO world governing body, and No. 6 with the WBC and IBF. With the win, the New Zealander stays among the chasing pack jostling for a shot at one of the four major titles, currently held by English rivals Anthony Joshua and Tyson Fury.

Joshua’s promoter Eddie Hearn remains bullish about Joshua-Fury happening this summer, and Parker still has some work to do to secure a mandatory title shot in 2021. But Saturday’s win — the third of a three-fight deal with promoter Matchroom — certainly helps Parker’s cause.

“It was a tough fight, I had to dig deep and stay focused,” Parker said.

A third loss in six fights suggests Chisora’s days among the heavyweight elite are over, but he showed he can still bring drama against top contenders.

Parker was floored in the first 10 seconds, and it took him a while to regain his composure.

“I feel the boxing skills from the middle rounds to the end made the difference,” Parker said. “It was a close fight, it could have gone either way.”

Chisora (32-11, 23 KOs), 37, who moved from Zimbabwe to London as a child, kept Parker guessing up until the first bell. On the eve of the fight, Chisora threatened to pull out of the fight over a row as to who would walk to the ring second.

Controversy has never been far away in Chisora’s career, which needed a boost after the 37-year-old suffered his 10th professional defeat to Ukraine’s Oleksandr Usyk in October last year.

Parker (29-2, 21 KOs), 29, from Auckland, also needed to give his own career a lift after a dour points win over fellow New Zealander Junior Fa in February.

Both fighters had new trainers in their corners Saturday in Manchester to try and improve their form. Buddy McGirt, who has coached a string of world champion boxers after reigning as a world champion himself in the 1990s, was in Chisora’s corner, while former world middleweight champion Andy Lee, one year younger than Chisora, was Parker’s new coach.

Any doubts as to whether Chisora still had serious ambitions at 37 were quickly erased when he put Parker on the canvas in the first 10 seconds. Parker was caught cold by a cuffing right to the side of the head and took a count on one knee before quickly recovering.

Parker, who outpointed American Andy Ruiz for the WBO world heavyweight title in December 2016 and lost it in a third defense to England’s Anthony Joshua in March 2018, got his jab working in the second and third rounds, but Chisora did not let him establish any early rhythm. Chisora seemed stronger in the clinches, but Parker finally established some authority behind his jab and combinations in the sixth round.

Chisora, whose sole world title shot ended in a valiant points defeat to Vitali Klitschko for the WBC belt in February 2012, fought like his career depended on it and swapped big blows with Parker at the end of the eighth. Parker landed a volley of punches before Chisora fired back, including a right uppercut, which made it a hard round to score.

A lot of the rounds were close, but the 10th belonged to Parker’s tidy work and quick combinations. Parker looked fresher in the final two rounds, and it proved vital.

On the undercard, two world title fights went the way of the champions.

Katie Taylor was pushed close by Natasha Jonas in a unanimous points decision to retain all four world lightweight titles.

Jonas rallied in the second half of the fight to make it a close call. Only Delfine Persoon has pushed Taylor this close before in the professional ranks as the Irishwoman got drawn into a brawl in the latter rounds.

Taylor won an enthralling encounter by scores of 96-94, 96-95 and 96-95. Taylor (18-0, 6 KOs), 34, from Bray in Ireland but based in Connecticut, also beat Jonas on points at the 2012 Olympic quarterfinals, when a crowd generated a record 113.7 decibels of noise at the ExCel Arena in London Docklands. No fans were present to see the rematch due to coronavirus restrictions, but they produced an even better fight without the backing of fans than their Olympic bout.

Jonas (9-2-1, 7 KOs), 36, from Liverpool in England, has been impressive recently after holding Terri Harper to a draw for the WBC world junior lightweight title last August.

Jonas showed that same form in the later rounds against Taylor, whose future potential opponents could include New York-based Puerto Rican Amanda Serrano, Chicago’s Jessica McCaskill, the undisputed world welterweight champion, and Colorado’s Mikaela Mayer, the WBO junior lightweight champion. However, a rematch with Jonas has to also be an option for Taylor over the next 12 months.

“When they are willing and ready, I’m ready to do a trilogy,” Jonas said. “I want to be in a championship fights.”

Taylor won the early rounds through her volume of punches and hand speed, but Jonas fired back with combinations to head and body in the third.

Southpaw Jonas, fell short a bit in the fourth round, and Taylor landed a hard looping left early in the fifth.

But Jonas hurt Taylor with a short left hook in the sixth round as both boxers let their hands go in an entertaining two minutes. Jonas had more success in the seventh round, digging in body shots, and in the eighth there was brilliant action as the pair stood toe-to-toe and traded blows.

It seemed tight going into the final round, which was a thrilling affair that Taylor edged with her intensity.

Londoner Richards (16-2-1, 9 KOs), 31, had limited success in the first half of his first world title shot, but landed a good combination in the fifth round. He also landed a good left hook on the counter in the sixth, but Bivol (18-0, 11 KOs), 30, built up a points lead behind consistent pressure.

Bivol’s jab kept him ahead, and he landed a flurry of punches in the seventh and eighth, but Richards was never badly hurt.

Richards showed plenty of appetite in the last two rounds, but he didn’t seem close to threatening Bivol, who has ambitions of unifying the titles in the division against fellow Russsian Artur Beterbiev, the WBC and IBF champion.

“After one and a half years I think it is OK and a normal performance for me,” Bivol said.

In a nontitle, 10-round middleweight bout, Chris Eubank Jr. earned scores of 98-92 over English rival Marcus Morrison. Eubank got the job done and says he chose not to end the fight with a knockout in his first bout with Roy Jones Jr. as his trainer.

Eubank (30-2, 22 KOs), 31, did not take long to show the skills he has been sharpening at the Florida gym of four-weight world champion Jones, 52, as he opened up with a blistering attack in the second round. Eubank landed an array of punches with Morrison (23-4, 16 KOs), 28, trapped on the ropes, but then stepped away and allowed the Manchester boxer off the hook.

“I probably could have ended the fight there [in the second round], but I wanted to get rounds and use some of the stuff Roy has been teaching me,” Eubank said. “I decided to box and work my way through the fight. He was tough. You can’t get better by knocking a guy out in the first or second round … so I decided to keep him in there and learn.”

Eubank is now targeting a title shot at middleweight after dropping down a division for his last fight in December 2019, and his team is hoping to land a fight against Gennadiy Golovkin, the IBF champion, or Ryota Murata, the WBA champion from Japan.