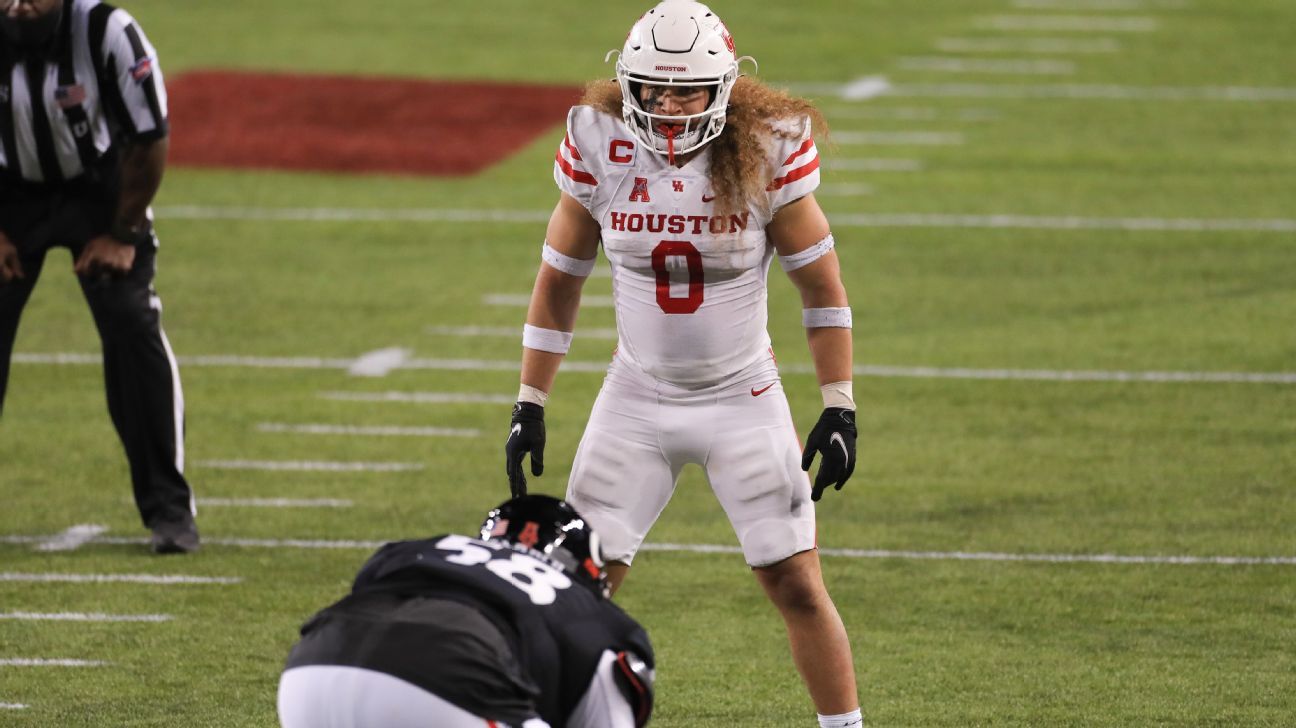 TAMPA, Fla. — Unlike many other NFL prospects, former University of Houston linebacker Grant Stuard wasn’t sent a box of hats for the 2021 NFL draft. The only NFL hat he owned was a vintage Tampa Bay Buccaneers hat his father brought over from Spring, Texas, on Saturday.

It just so happened to be the hat of the team that called his name with the 259th overall and final pick of the draft, making him this year’s Mr. Irrelevant.

“When their pick was up and they were on the phone, he was pointing at the hat,” Stuard said of his dad. “I was like, ‘That’s just crazy.’ It was just by chance.”

Stuard getting to this moment wasn’t by chance, however. The leadership skills that led to him being voted a team captain at Houston? Those were cultivated at home. Though the two were together in Houston for one of the most important days of Stuard’s life, his relationship with his dad has been marked by ups and downs and absenteeism, and he fought to care for his siblings.

“My mom is a drug addict. … She used to work in the sex industry,” Stuard told ESPN on Saturday night. “My dad was in prison a good portion of our young life. Even when he wasn’t in prison, he was very absent when we were growing up. That results in both parents being absent the majority of the time.”

Stuard learned that in the grand scheme of things, an uncertain future in the NFL or being selected last is nothing compared with fighting to survive. He credits his faith, a village of people that helped raise him and football — the one constant he could turn to every August — for keeping him on track.

“There were a lot of people along the way — a lot of family members, a lot of teachers, a lot of coaches — that deserve worlds of credit for everything that they did,” Stuard said. “Whether it was bringing a meal, or my Nina paying a bill. There were people all over the place that just really gave back to us. So that’s why I’m really passionate about giving back with the little things I do as well.”

At his Houston pro day, Stuard raised money for Heels to Halos, a Christian organization that aims to help women who were involved with sex trafficking. Stuard asked fans to pledge donations for each rep he performed on the bench press, with a goal of 25 reps. He wound up benching 28 reps, raising $5,210. He also put on back-to-school drives and toy drives.

“We love him as a person and, obviously, as a player,” general manager Jason Licht said Saturday. “He’s got a lot emotion on the field. He’s had a little bit of a tough life, he’s been taking care of his siblings. … He’s a very mature person, a very accountable person and a very accountable football player. Guys that can get through tough times and adversity — that’s a big box to check for us.”

So is Stuard’s special-teams ability, which was a focus for the Bucs on Day 3 of the draft. They love his speed, physicality and toughness and believe it will translate well to their coverage units.

“He reminds me — this is going way back — I was with the Dolphins when we signed Larry Izzo out of Rice as an undersized linebacker that played with a huge heart,” Licht said. “He ended up making a great career for himself as a special teams linebacker. Not to say that we don’t think Grant has a chance to play linebacker — he’s going to be [an inside linebacker] for us on the field — but we think he’s got a chance to excel as a special-teams ace.”

Stuard said he hopes he can use his platform to help others going through similar obstacles, particularly those whose with absent parents.

As for Stuard’s relationship with his family, both parents were with him when he got the phone call from Tampa Bay. His mother even popped in during his Buccaneers videoconference with local media.

“My mom … she pops in every now and again,” Stuard said. “My dad is doing much better. He definitely has improved. His involvement is a lot better. He’s becoming more involved and he helps my little brother with sports and stuff like that.”

Stuard said his major driving force is being a role model for his siblings. He and his wife plan to move at least one of his four siblings in with them.