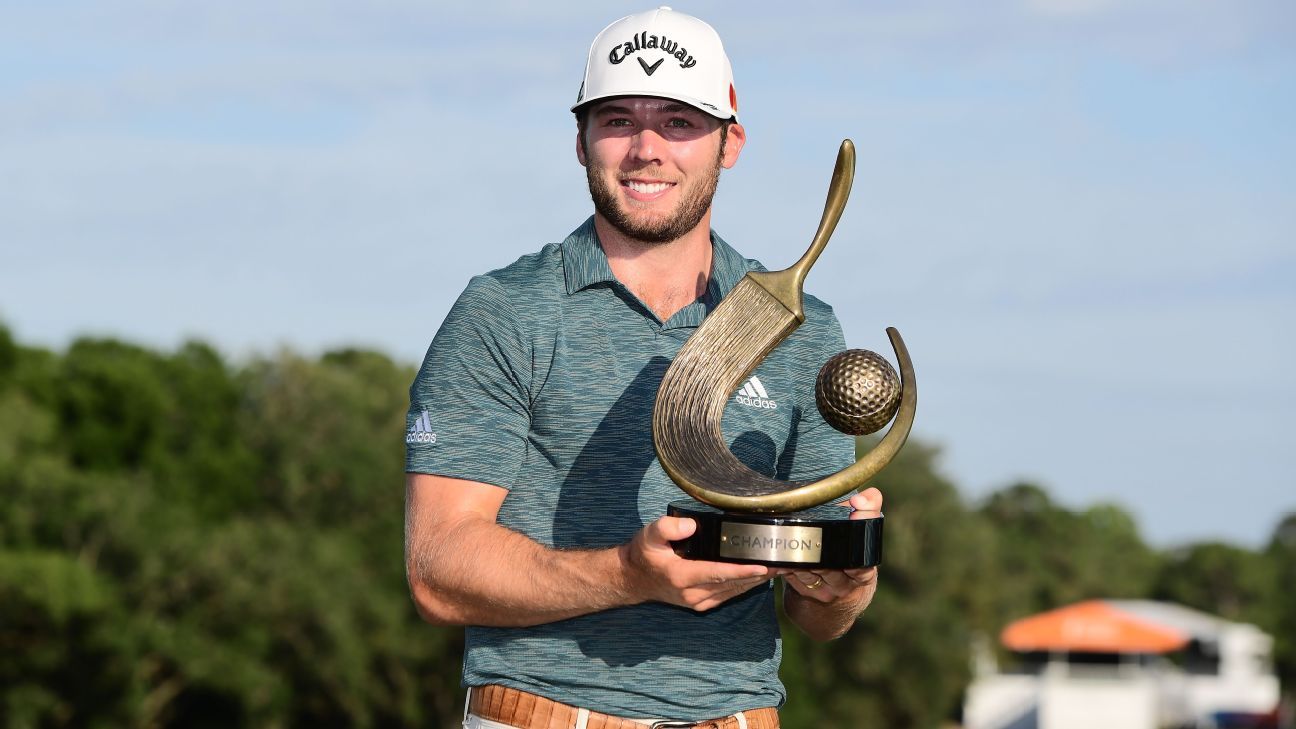 PALM HARBOR, Fla. — Eight times this season, Sam Burns has been atop the leaderboard after every round except the one that mattered. That changed, finally, at the Valspar Championship.

Burns got some help from Keegan Bradley hitting into the water on the 13th hole, and then the 24-year-old from Louisiana took it from there with two big birdies that led to a 3-under 68 and a three-shot victory Sunday.

Burns won for the first time on the PGA Tour after twice failing to convert 54-hole leads in the Houston Open last fall and the Genesis Invitational at Riviera in February.

The victory moves him into the top 50 in the world and all but assures a spot in the U.S. Open, along with his first trip to the Masters next spring.

Burns was wiping away tears when he tapped in for a meaningless bogey on the final hole, especially to see his wife, parents and other family members pour onto the green to celebrate the moment with him.

“I’ve worked so hard for this moment,” Burns said. “They’ve all sacrificed so much.”

He had reason to believe this moment could have come sooner. Burns wasted a good start at the season-opening Safeway Open. He closed with a 2-over 72 to tie for seventh in the Houston Open. He lost a two-shot lead at Riviera, coming up one shot short of a playoff.

“Those moments in the past, you really learn a lot,” Burns said. “This week coming down the stretch, I tried to stick to our process.”

Bradley and Burns were tied through 36 holes and 54 holes, and they stayed that way through 12 holes on another blistering day at the Copperhead course. That changed with one swing.

Bradley came up well short on the par-3 13th and went into the water, leading to double bogey. Burns saved par with an 8-foot putt for a two-shot lead.

Burns was three shots ahead through 13 holes on Saturday and he struggled to retain a share of the lead, so he knew what was possible. This time, though, Bradley had no chance.

Burns followed with a wedge that stopped next to the hole for a tap-in birdie on the par-5 14th. He put Bradley away with a 7-iron to 18 feet and a birdie putt that brought the most emotion he showed all day, a hard fist slam.

He had a four-shot lead with two holes to play, the water and worst hazards behind him.

No one else had much of a chance.

Max Homa briefly tied for the lead with a birdie on the par-5 opening hole. He didn’t make another birdie the rest of the day, missing several chances around the turn and ending his hopes with a double bogey on the par-3 15th without hitting into the water. He shot 74.

Cameron Tringale was lurking but never seriously challenged. He shot 68 and shared third with Viktor Hovland, whose had a 65 but started too far back at the start of the day.

Burns built a quick two-shot lead on the front nine Sunday. Bradley answered with a pair of birdies, and then made a 15-foot birdie putt from the fringe on No. 9 to take a one-shot lead to the back nine.

The final round started to take shape on the par-5 11th, both hitting wild tee shots and good escapes from the trees. Burns won the wedge contest, making a 15-footer for birdie, to tie for the lead. Bradley fell back with his double bogey and never caught up.