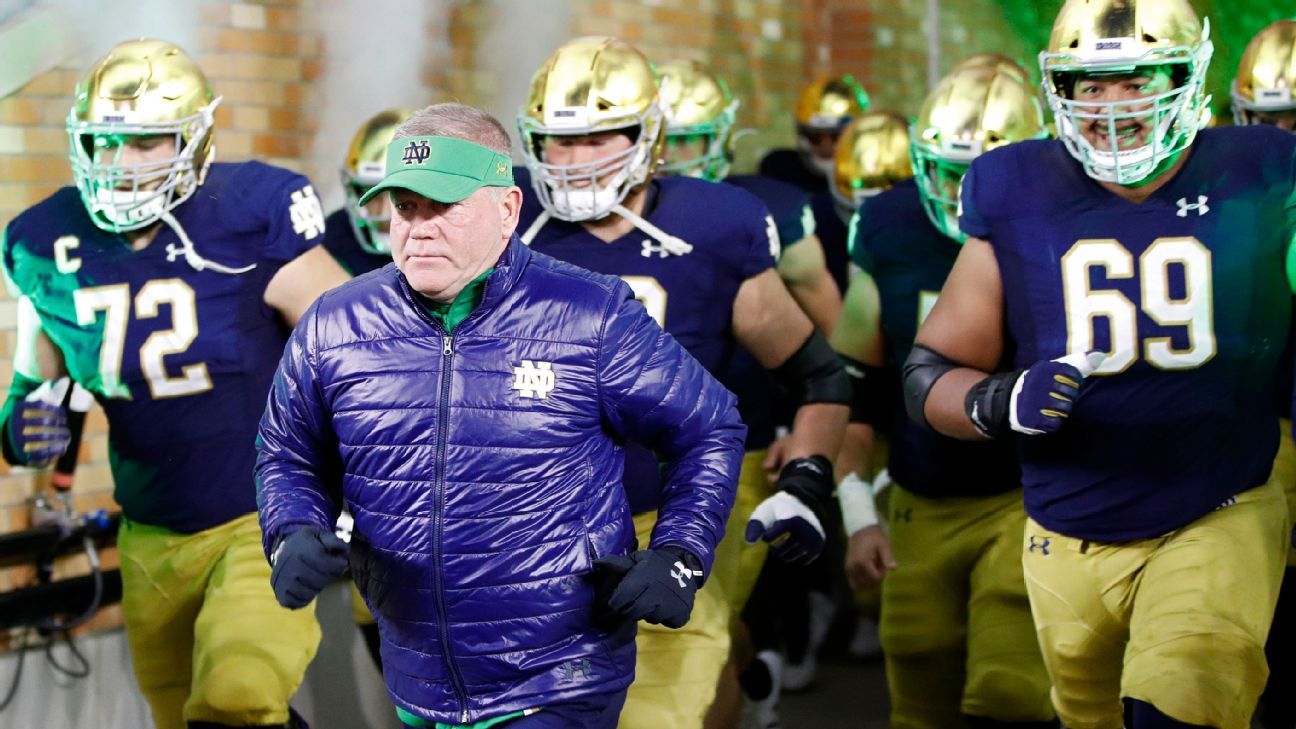 Editor’s Note: This story originally ran ahead of Notre Dame’s ACC title game showdown with Clemson and has been updated. Watch “Notre Dame Football: A Year in the ACC” tonight on the ACC Network at 8 p.m. ET.

For what feels like centuries, we have debated perhaps the greatest mystery in the known universe: What would happen if (gasp!) Notre Dame ever joined a conference?

We finally have our answer.

College football did not spin off its axis when the best-known independent football program in the country joined a conference for the first time in school history, an arrangement for the 2020 season necessitated by the pandemic. If anything, the one-year football partnership between the Fighting Irish and the ACC could not have gone more perfectly for both sides.

Notre Dame went undefeated in the regular season, had its highest ratings on NBC in 15 years and, along with perennial conference power Clemson, helped give the ACC two playoff teams for the first time.

“It’s been a win-win,” then-ACC commissioner John Swofford said in the run-up to the 2020 ACC title game.

So then, why not make this a permanent union?

While Notre Dame athletic director Jack Swarbrick has repeatedly batted down any suggestion the Irish are leaving their independence behind anytime soon — including saying during the season, “the reasons that we value independence and [why] it continues to be a priority for us aren’t impacted by the positive experience of being in the ACC fully this year” — we now have evidence that a partnership could benefit both.

Though there is big money on the line for Notre Dame football as an independent, with its own television deal with NBC that pays $15 million annually, Notre Dame and ACC members shared their television money from their NBC and ESPN contracts this year and it paid off in the ratings.

Notre Dame’s season opener against Duke on NBC had 4.4 million viewers, making it the most-watched afternoon home opener on the network in 14 years. Its double-overtime win over Clemson in November had 10.2 million viewers, the second-most watched Notre Dame game on NBC on record. It also opened up new areas in Greenville-Spartanburg, South Carolina, and Birmingham, Alabama, which finished as the top two markets for Notre Dame on NBC this season.

Much of that could be related to attendance being severely restricted because of the pandemic, leading to more people tuning in from home. The Clemson game would have produced great ratings no matter what, but it is certainly eye-opening that the NBC schedule, which featured five ACC opponents, rated so well — especially in two Southern markets.

If the NBC ratings with ACC opponents were greater than they are with Notre Dame’s standard independent schedule, perhaps that allows some leverage to negotiate somewhere down the line if the Irish were to consider joining the conference. That would potentially make it easier to get an NBC/ESPN television package to work and could boost television revenue for all.

The other advantage of affiliating with a conference is better playoff odds. As an independent, the common view is that Notre Dame needs to go undefeated to earn consideration for a top-four spot because it does not have a conference championship game to provide wiggle room.

Of course, Notre Dame did go 10-0 in the 2020 regular season and would have almost assuredly made it into the playoff as an undefeated independent. But if the Irish had lost to Clemson in the regular season, they might have been behind one-loss Texas A&M. A one-loss conference champion simply has better odds to get into the top four.

Two juggernauts atop a conference, especially when they play each other, has also helped negate the typical “weak” or “soft” schedule arguments that break out about undefeated Clemson and can usually be made about the Irish, depending on who is on their independent slate. There has been little quibbling with the ACC schedule Notre Dame played this year, and the ACC has simply never had two teams in the elite-status conversation in the playoff era.

“We got a matchup with the team that’s camped out in the playoffs with Clemson, so when you’re looking at your schedule and you know that Clemson’s on it and now you’ve gotten the opportunity to join the ACC, it obviously puts you in a pretty good position,” Notre Dame coach Brian Kelly said. “You then start thinking, ‘OK, this could work out pretty nicely here.'”

In non-pandemic seasons, Notre Dame does play a five- or six-game ACC schedule as part of its arrangement with the league, and is part of the bowl lineup. It will go back to having five ACC games in the 2021 season, provided things have returned to normal. But when the ACC allowed Notre Dame to join for this season, several league coaches grumbled about the arrangement because the Irish had already received special considerations as an are-you-in-or-out member.

“We had the perfect ultimatum last year,” one coach told ESPN after the season as part of an in-depth look at the state of the ACC. “We had them, they had nowhere to go. What would they have done? Why would we do that? Because we know that’s our lifeboat out from where we’re at right now. And to be honest, is that not Notre Dame’s lifeboat? Can they survive if the Big Ten and the SEC start lapping everybody? Instead, we just let them run through the front door, take all of our stuff and run out the back.”

Regardless, this season has been a valuable experience that has provided Notre Dame a template as it continues to evaluate which model could serve the program best long term.

“You can talk all you want about being in a conference. But if you’re not, you really can’t talk firsthand about it,” Kelly said. “We can now, so it’s offered us a different perspective, there’s no doubt about it.”

The coach added that this year’s arrangement brought positives (competing for the ACC championship) and negatives (missing traditional rivalries) that are still being weighed.

“Those are the questions that Jack Swarbrick is entertaining at a higher level,” he continued. “If they come and ask my opinion, I would say that the ACC has been a great relationship for Notre Dame but independence has been something that is part of who we are in our DNA.”

Swofford also isn’t holding his breath for a permanent Notre Dame-ACC marriage, though he did point out that if the university decides to join a conference any time between now and 2036, the contract states it would move into the ACC. And it doesn’t hurt that both sides benefited this season.

“I know Notre Dame always has and still continues to cherish its independence in football,” Swofford said. “I think Notre Dame would say, and we would say, that their first year in a conference ever in the sport of football has been a very positive experience. I don’t know that that necessarily translates down the road or for the future, but it was certainly the right thing to do for 2020.”