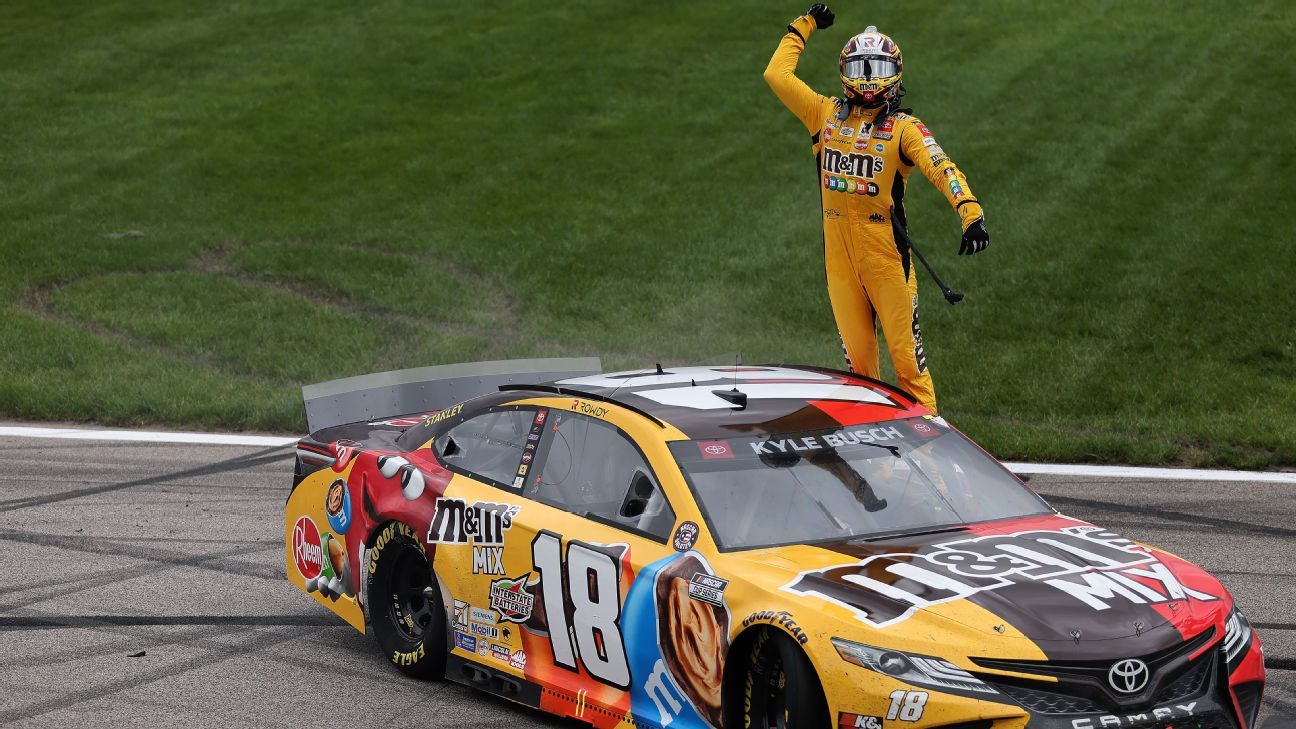 KANSAS CITY, Kan. — Kyle Busch celebrated his 36th birthday Sunday by winning a two-lap sprint to the finish at Kansas Speedway, becoming the 10th different winner through the first 11 races of the NASCAR Cup Series season.

Busch had stalked Kyle Larson all day before beating him on a late restart to take the lead. Then, after another caution in the closing laps, Busch followed up his Truck Series win Saturday night with another trip to victory lane.

“That’s a Kyle Busch win right there,” he said.

Kevin Harvick overcame a tire mishap on a late pit stop and took advantage of some chaos on the final restart to finish second. Brad Keselowski dominated the early laps before following his win at Talladega last weekend by finishing third, and Matt DiBenedetto and Chase Elliott rounded out the top five.

Larson led a race-high 132 laps before his day ended in 19th place — and bitter disappointment.

Even after he was beaten by Busch on that late restart, he had another chance when Christopher Bell got sideways in Turn 4 to bring out another caution. But on the restart with two laps to go, Larson got trapped behind Ryan Blaney and wound up getting him sideways while trying to give him a push, taking both of them out of contention.

It was nearly a perfect afternoon for Larson’s team owner, Rick Hendrick, whose late son Ricky won his only career Truck Series race at Kansas in 2001. Just as he did at Las Vegas, Larson was driving the red, white and blue paint scheme that was nearly identical to the one that Hendrick drove 20 years ago.

Ricky Hendrick died along with nine others in a plane crash on Oct. 24, 2004, near Martinsville, Virginia.

Denny Hamlin, who also was searching for his first win, also had a frustrating finish. He had taken the lead on a restart with 32 to go before Larson applied pressure from behind, and Hamlin wound up slapping the wall to bring out a caution.

DiBenedetto has quietly stacked up three straight top-10 runs for Wood Brothers Racing. He was ninth at Richmond and nearly won at Talladega before finishing fifth. His fourth-place run Sunday was his best of the season.

For one thing, crew members responsible for controlling tires on pit road. Harvick and Tyler Reddick spent most of the day running in the top five before pit stops when awry, forcing both to serve penalties in the waning laps. Daniel Suarez also had an uncontrolled tire when he would have been the recipient of a free pass.

Ross Chastain and Erik Jones had to start at the back after twice failing inspection and Anthony Alfredo was sent there for unapproved adjustments. Ryan Newman had a forgettable day celebrating his 700th start when a crew member was seen modifying the body on the No. 6 car during a competition caution — he was never a factor after the penalty.

It’s the annual Throwback Weekend at Darlington, when teams roll out old-school paint schemes for the Cup Series race on Sunday. Among those revealed: Larson in his first go-kart’s colors, Elliott in the Hooter’s colors of Alan Kulwicki, Joey Logano honoring Mario Andretti‘s first F1 win in 1971 and William Byron paying homage to Neil Bonnett.