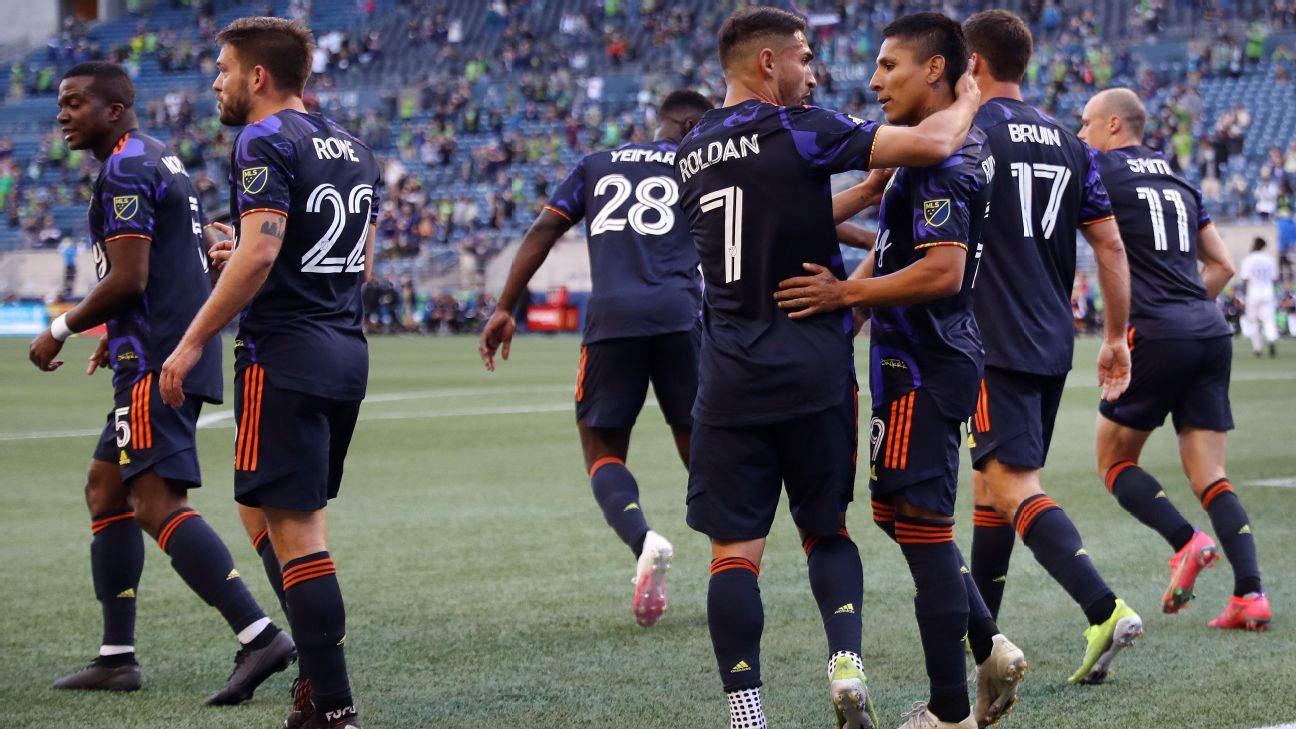 It was a weekend for big goals and big wins in Major League Soccer. MLS Cup champs Seattle Sounders comfortably dismantled the “rebooted” LA Galaxy and kept Javier “Chicharito” Hernandez off the scoresheet. FC Dallas scored twice in the opening 14 minutes on their way to an impressive 4-1 win over the Portland Timbers, San Jose rocked DC United 4-1 thanks to more heroics from teenage sensation Cade Cowell, and a Nani-led Orlando City SC thumped FC Cincinnati.

Get caught up with the weekend’s action and see where your team sits in our Week 3 Power Rankings.

Raul Ruidiaz‘s brace powered Seattle past the previously unbeaten Galaxy in a dominant 3-0 win. The result puts Seattle atop the Western Conference standings with seven points, tied with NYCFC for the most in MLS. — Bonagura

Carles Gil was unstoppable in New England‘s 2-1 win over Atlanta, be it with his passing or off the dribble. His penalty proved decisive as well. Yes, it’s early, but the Revs have the look of an MLS Cup contender if Gil can stay healthy. — Carlisle

After the dream start to the season, the Galaxy came back to Earth in a 3-0 loss at Seattle. After scoring five times in the first two games, Chicharito was limited to just one shot — it went wide — and now the focus turns to next week’s El Trafico against LAFC. — Bonagura

With a long road trip to Monterrey beckoning in the CONCACAF Champions League, the Crew were bound to try and conserve some energy in the heat against Montreal. Managing just three shots probably wasn’t what Caleb Porter had in mind, but it was still enough to secure a 0-0 draw. — Carlisle

LAFC welcomed back 2020 Golden Boot winner Diego Rossi, but remained without Carlos Vela in a 1-1 draw at Houston. Despite having the bulk of the possession (61%), the Black and Gold mostly fizzled out in the final third and lacked creativity. — Bonagura

A brace from Rubio Rubin — the one-time United States youth star — led RSL to a 3-1 win at home against Sporting KC. With two wins in two games, RSL is the lone MLS side yet to drop a point this season. — Bonagura

Montreal remained unbeaten thanks to its 0-0 draw with Columbus, but given the opponent’s squad rotation, this result is a disappointment. Substitute Ahmed Hamdi was one of the few attacking bright spots. — Carlisle

As 17-year-old Cade Cowell’s star continues to ascend, the Quakes have become appointment viewing. In a 4-1 win over DC United, Jackson Yueill provided a brace — including a goal of the year candidate — and Cowell scored and assisted. — Bonagura

If Taty Castellanos was upset about his thwarted move to Palmeiras, he channeled it in the right way, absorbing a hit (that resulted in a red card for Philly’s Jose Martinez) and then scoring on a rabona to seal NYCFC’s 2-0 win. Jesus Medina‘s revival continues as well. — Carlisle

Alan Pulido made his first start and scored his first goal of the season, but after going up 1-0 in the 17th minute, SKC slipped to a deflating 3-1 loss vs. Real Salt Lake. — Bonagura

The Whitecaps turned 57.9% possession into just four shots in a toothless 1-0 loss to Colorado. Vancouver was nearly bailed out with a late penalty, only to see it reversed (correctly) through VAR. — Bonagura

Miami probably deserved better, even as the Higuain brothers missed the 0-0 draw with Nashville after attending their mother’s funeral in Argentina. Miami is looking much more competitive in their second season. — Carlisle

Diego Fagundez‘s second goal in two games served as the game-winner in Austin’s 1-0 victory at Minnesota United. With six points through three games, Austin is off to a hot start in its MLS existence — and is notably ahead of the other two Texas teams in the standings. — Bonagura

Any win over Cincinnati should be taken with a vat of salt at this point, but the Lions’ attack looks much better with Mauricio Pereyra on the field. Nani’s second golazo in as many weeks was a sight to behold as well. — Carlisle

Atlanta will feel hard done by given the tight penalty call that went against the Five Stripes. That said, Gabriel Heinze’s side was outplayed for most of the match. Now it will try to make up a three-goal deficit to Philadelphia in the CCL. — Carlisle

Houston did well to stifle the LAFC attack and after falling behind 1-0 in the 55th minute, leveled the scores through Tyler Pasher two minutes later. It was a good point for the Dynamo ahead of next week’s trip to Dallas. — Bonagura

Okay, so the Union have a bigger match in the CCL this week, but the manner of Philadelphia’s 2-0 defeat to NYCFC will still annoy the hell out of Jim Curtin after watching Jose Martinez basically give the game away with stupid red card. Discipline will be the order of the day in Tuesday’s second leg against Atlanta. — Carlisle

A beautiful free kick goal from Diego Rubio provided the difference as the Rapids beat Vancouver, 1-0, to pick up their first win of the season. Sam Vines made his season debut, which allowed Kellyn Acosta to shift back into central midfield, where he played in more of an advanced role. — Bonagura

New striker Fabio doesn’t have a goal yet, but he did plenty of dirty work in setting up both Red Bull goals in a 2-0 win over Chicago, Gerhard Struber’s first as RBNY manager. Meanwhile, Caden Clark continues to dazzle, scoring his second goal in three games. — Carlisle

Playing a rotated squad in between midweek CONCACAF Champions League matches against Club America, the Timbers never got into gear in a 4-1 loss to FC Dallas. The good news: Jeremy Ebobisse made his season debut off the bench, after being sidelined with a hamstring injury. — Bonagura

After two sluggish performances to open the season, FC Dallas looked dangerous in a 4-1 win against Portland that featured highly touted 18-year-old Dante Sealy‘s first MLS goal. Paxton Pomykal played well off the bench as he continues to work his way back to full fitness. — Bonagura

For the first time in its MLS existence, Nashville is falling short of expectations, with three home draws in three matches. It survived another slow start too, only this time goalkeeper Joe Willis came to Nashville’s rescue. — Carlisle

The Reds had the weekend off, the better to prepare for the CCL where it has the onerous task of making up a two-goal deficit against Cruz Azul. Manager Chris Armas will hope more of his roster will get back to sufficient health. — Carlisle

Having just four outfield players on the bench speaks to the ever-lengthening injury list for Hernan Losada, and it resulted in a lopsided loss to San Jose. Losada is right to stick to his philosophical guns, but complaints about his players’ lack of fitness will only carry him so far. — Carlisle

You know your attack is toothless when your second best chance of the day is a bicycle kick attempt from outside the penalty area. The defense wasn’t much better. But so it goes for the Fire, who is still looking for its first win of the season after losing to the Red Bulls. — Carlisle

FCC actually look like they’ve taken a step backward from last season, which takes some doing given they weren’t that good to begin with. Jaap Stam needs to go back to the defensive drawing board after Cincinnati’s comprehensive 3-0 defeat to Orlando. — Carlisle

The Loons’ disastrous start to the season continued in a 1-0 loss to Austin FC, leaving them as the only team in MLS without a point through Week 3. — Bonagura