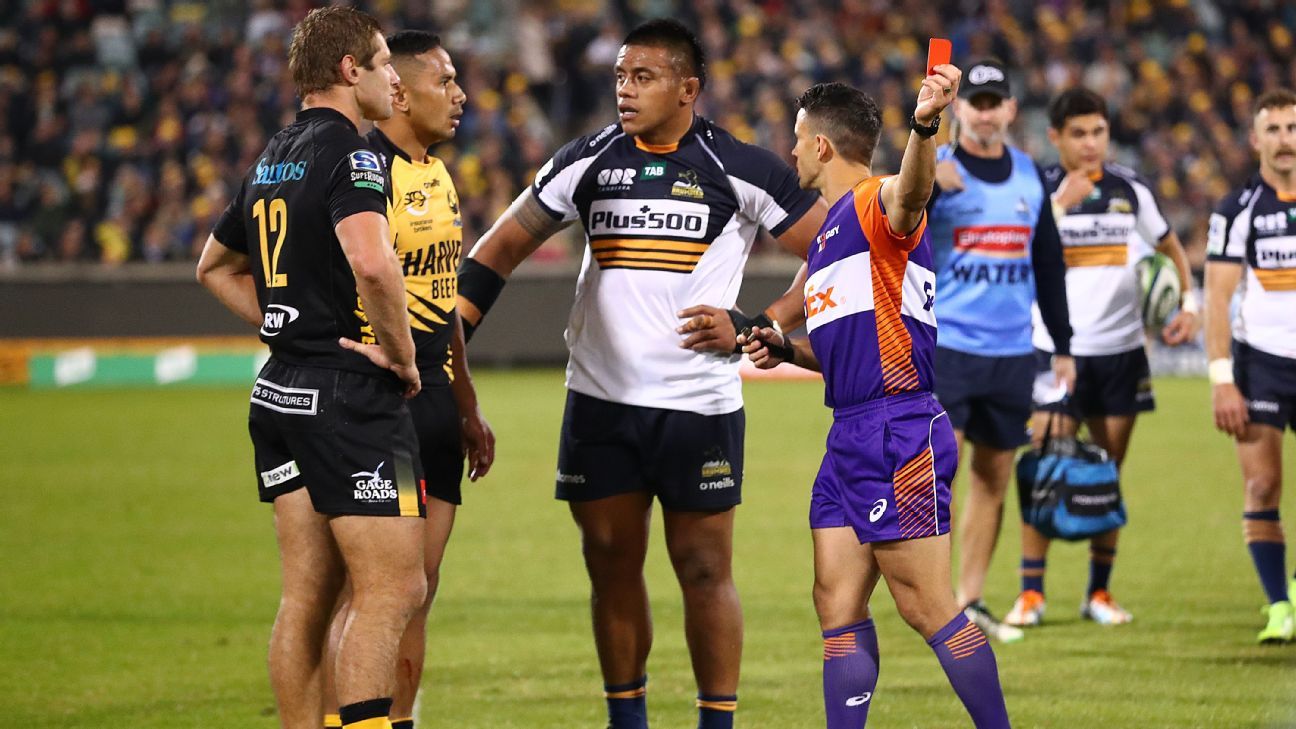 The stage is now set for both Super Rugby finals to be played this weekend, with the Brumbies emerging from their dogged contest with the Force to join the Reds in the Brisbane decider, while the Crusaders host the Chiefs earlier on Saturday, a game that was already confirmed ahead of Super Rugby Aotearoa’s Round 10 fixtures.

Read on as we bring you some of the big talking points from the weekend’s action.

THE RED-CARD REPLACEMENT LAW PROVES ITS WORTH, AGAIN

In a week when the red-card numbers in Super Rugby AU were run and analysed by ESPN, it was almost inevitable that Saturday’s qualifying final would add to the tally. And so it proved when only moments before halftime, Force winger Toni Pulu was marched for a dangerous tackle on Brumbies inside centre Irae Simone.

The third man into the tackle, Pulu’s right shoulder caught Simone on the nose, the Brumbies back immediately grabbing his face on the ground which saw Nic Berry soon blow to halt the contest.

Looking at the big screen alongside assistant referee Amy Perrett and TMO James Leckie, Berry quickly decided that Pulu’s tackle had met the threshold for a red-card despite the fact his left arm had appeared to wrap, that he was more bracing for contact than attempting a big tackle given his two teammates had gone low, and that there was a small dip in Simone’s bodyheight.

Still, in looking at how World Rugby’s updated head contact assessment is managed, it was hard to find fault with how the officials had come to their decision.

And this is why the red-card replacement law variation must be enacted across the game, as discussed with Rugby Australia’s Referees Manager Scott Young last week.

Crucially there was no intent from Pulu to injure Simon, as alluded to by former Wallabies coach Michael Cheika during the halftime panel on Stan Sport.

“You see here, the fact that the two players in front of Pulu make the contact brings Simone’s head forward, and puts it into the shoulder [of Pulu].

“I really think intent is an important thing in these decisions. We’ve got an unbelievably exciting final that we want to see played with [complete] teams.

“I think if he comes in with intent and a swinging arm, yeah by all means go and have an early shower, brother. But this way, I just don’t think there is any fault there of any intent.”

Pulu’s tackle was not one that should leave a team down to 14 men for the remainder of the match, in this case what would have been an entire half of rugby as well as the additional first-half action that allowed the Brumbies to cross for a try out wide.

In the end, the Force conceded only eight points and kicked a penalty themselves for a -5 differential in the 20 minutes before Pulu could be replaced, ensuring they remained in the contest and the game wasn’t completely ruined for both the supporters at the ground and those watching on at home.

While it is yet to be confirmed, ESPN understands the red-card replacement trial will also be used during the trans-Tasman Super Rugby series which will provide further data for World Rugby to analyse as it considers implementing the law across the game.

There is no doubt the variation could be tweaked further, perhaps retaining the red card law in its original format for issues of truly disgraceful foul play like biting, eye-gouging or punching, and for those actions when a player’s wellbeing is really put in jeopardy, as it was with the high-ball contest during the Sharks-Stormers Rainbow Cup match that saw Aphelele Fassi only narrowly avoid disaster after aerial contact from Seabelo Senatla.

Here is the Red card for the Stormers earlier against the Sharks. Horrible incident and lucky there was no serious injury caused #RainbowCupSA pic.twitter.com/3leCkr7SRG

But for unintentional, glancing blows like the one Pulu was sent off for, the 20-minute replacement trial is an important development for rugby to consider on a permanent and complete basis.

Teams do not deserve to play with just 14 men for the remainder of matches for incidents of the like.

Nobody is disparaging of World Rugby for wanting to ensure the safety of its players, but it must also respect the spectators who have paid for seats or broadcast subscriptions so they may watch on at home.

The law trial had already proven its worth in the regular season of Super Rugby AU, and that was only reinforced on Saturday night in Canberra.

VALETINI HAS ONE ARM IN WALLABIES NO. 6 JERSEY

If Dave Rennie was picking a Wallabies starting side to contest a Bledisloe Cup match tomorrow, it’s hard to see how he could leave out Brumbies back-rower Rob Valetini – particularly after his performance against the Force on the weekend.

Valetini was just about the best player on the paddock in the Brumbies’ 12-point victory, the 22-year-old getting his side on the front foot with a series of tackle-shredding runs that saw him finish with 68 metres on 13 carries, along with seven beaten defenders.

His 13 runs were five more than any other forward involved, too.

This is undoubtedly Valetini’s best year of Super Rugby yet.

Included in Rennie’s 40-man squad for a camp in Sydney last month, it appears the experience has only further motivated the Melbourne-born back-rower to take his game to another level.

The Wallabies have been short on genuine ball-carriers in the back-row in recent times, no more so than when both Michael Hooper and David Pocock were part of the same loose forward trio. But in Harry Wilson and Valetini, Rennie has two genuine line-benders.

Starting Valetini for the tough opening stages of Test matches would then allow Rennie to bring on one of the other young back-rowers, perhaps with a little more speed and agility, when things open up later in games.

The Force’s Tim Anstee, another young back-rower who has impressed this year, would be the perfect candidate for that role.

SOMETHING FOR THE HURRICANES TO BUILD ON

The Hurricanes saved arguably their best performance of Super Rugby Aotearoa for their final match as they blew the Highlanders off the paddock in a 41-22 triumph in Wellington on Friday night.

Having won only the one game previously, coincidentally away to the Highlanders, the Hurricanes landed vital blows with tries minutes before and after halftime to claim the lead and then powered away with the contest thereafter.

At the heart of their performance was All Blacks centre Ngani Laumape and talented young winger Salesi Rayesi who both ran for over 130 metres. Back-rowers Devan Flanders and Du’Plessis Kirifi also impressed.

And the result has given the Canes a launching pad from which they can rip into the trans-Tasman series from Friday week, when they face the Waratahs in Sydney.

They have the power runners and attacking prowess to worry each of the Australian sides, but will need more of the control halves Ruben Love and Luke Campbell exhibited on Friday night.

How good was it to see Nehe Milner-Skudder and his famous skip-step back in Super Rugby?

The Highlanders may not have finished with the win, but the sight of Milner-Skudder running should be enough to warm the heart of any rugby fan and have Highlanders supporters licking their lips at what he might be able to do in the trans-Tasman series.

Dogged by shoulder injuries since the 2015 World Cup when he was a star of the All Blacks’ triumph, Milner-Skudder has struggled to get back on the paddock with any great consistency.

But there he was in Wellington on Friday night, again having opposition defenders clasping thin air.

Milner-Skudder only has a contract with the Highlanders for this year, but at 30 years of age he still has plenty of good rugby left in his legs.

Hopefully the injury curse won’t rear its head during the Highlanders’ trans-Tasman campaign and he can prove that that is very much still the case.