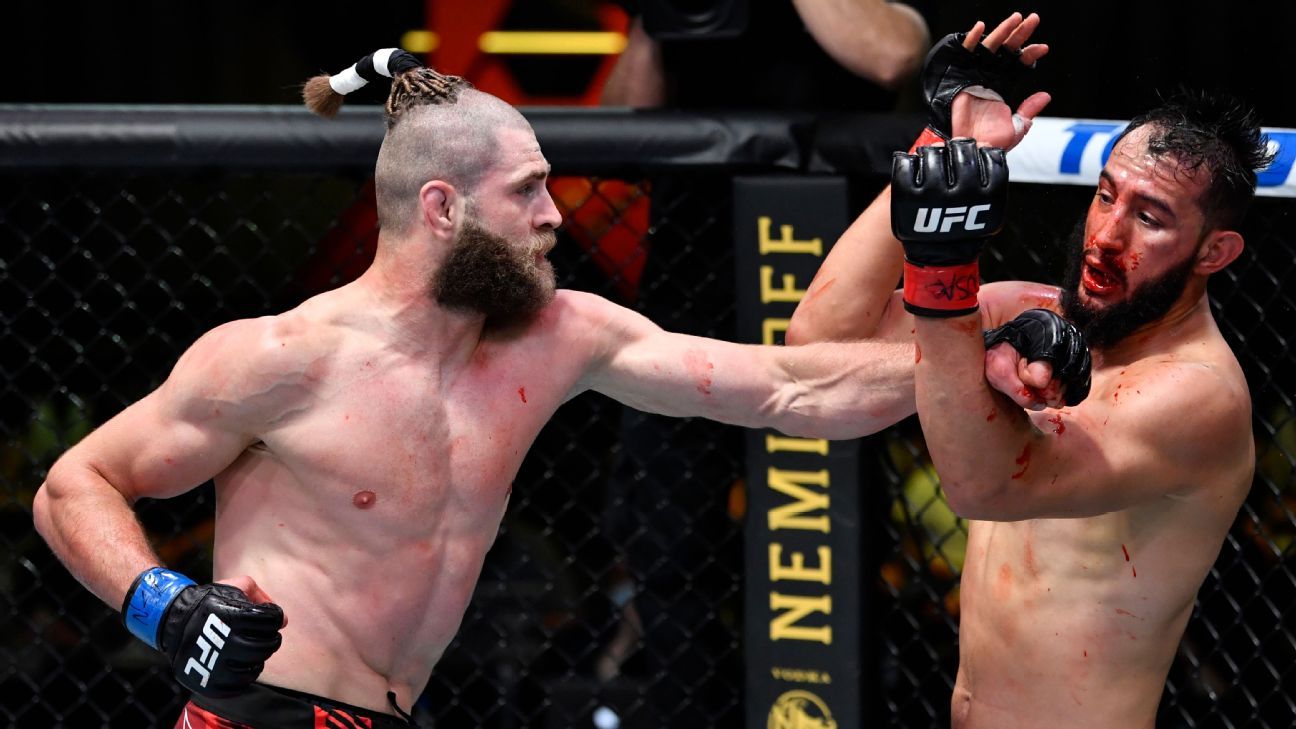 In Jon Jones‘ absence, the UFC’s light heavyweight title picture is quickly shaping up into one of the most competitive and intriguing across the entire promotion. Jan Blachowicz looked dominant against Israel Adesanya and faces another daunting challenger in Glover Teixeira later this year. But on Saturday, Jiri Prochazka threw his name into the conversation with a major statement victory over Dominick Reyes. Could he potentially become light heavyweight champion later this year, in just his third UFC fight?

Speaking of Jones, his efforts to lock down a heavyweight championship megafight against Francis Ngannou have thus far been ineffective. In the last week, Jones and First Round Management decided to amicably part ways. Could a new management team for Jones be the difference in making Ngannou-Jones happen?

If Jones and the UFC can’t make the fight the MMA world is eager to see, Derrick Lewis has the inside lane to the next shot at Ngannou. But what happens after that? Whether or not Jones gets his shot, former two-time heavyweight champion Stipe Miocic is likely to keep his name in the conversation as he makes one more run towards the top. Miocic has said he’s bulking up with the thought of being better suited to match Ngannou. Will he get the chance, and if so, when?

Finally, what would a conversation about current events in the UFC be without Conor McGregor? He’s been ramping up the animosity towards Dustin Poirier in recent weeks with a war of words over a charity, as the build-up to their trilogy fight in July starts to hit its stride. Some thought McGregor’s respectful approach before he lost to Poirier in January lessened his edge. Will the trash talk let McGregor get into the head of another opponent?

Our panel of Ariel Helwani, Brett Okamoto, Marc Raimondi and Jeff Wagenheim breaks down the biggest headlines in the MMA world to decipher what’s real, and what’s not.

Prochazka will be UFC light heavyweight champion by the end of 2021.

Wagenheim: Boy, this is a tough one. How can I predict the demise of Blachowicz after what I saw from the champ two months ago against Adesanya? And then there’s the issue of timing. Blachowicz is scheduled to defend his belt against Teixeira on Sept. 4. That would leave the winner of the title fight less than four months to get back in the cage for the Prochazka forecast to have a chance of coming true.

So I’m going to say the statement is not real, but only the 2021 part. I do think Prochazka is a champion in the making, and it will not be too far into 2022 before he is wearing the belt. That is real. (One small hesitancy: While Dana White said prior to Saturday’s main event that the winner would fight for the title next, the UFC boss has been known to just say stuff with no follow-through. But a Prochazka title shot is a no-brainer.)

Why so much confidence in a man with just two UFC fights? Because this is no green prospect on the rise. Prochazka is just 28, but he has been a pro since 2012. He competed for years in Japan in the Rizin promotion, where he was light heavyweight champion and beat up some legitimate guys. His two UFC appearances have produced thrilling fights resulting in knockout victories over former title challengers.

In all, Prochazka has 25 knockouts and two submissions among his 28 victories. In his current 12-fight winning streak, all but one of those wins came by knockout. He finishes fights, making him just the kind of fighter White gets behind.

And Prochazka doesn’t just dish out the punishment. He can take a punch, too. He absorbed some big shots from Reyes and never stopped advancing. Blachowicz and Teixeira hit hard, too, and both can take a punch. It’ll be interesting to see who falls first.

In the end, what sells me on Prochazka as a future champion is his unorthodox approach. His strikes come from all angles and he improvises, making him a difficult opponent to prepare for. He is going to be a problem for anyone he faces, including the champ.

Stipe Miocic, who says he’s bulking up, will get one more shot at the title before he’s done.

Helwani: I believe it.

Let’s lay out the facts, as we know them:

Either Lewis or Jones is next for Ngannou. We know this for sure.

Let’s say it’s Lewis. The UFC will then try to make the Jones fight after that. No doubt about it. It would be foolish not to at least try, despite how negotiations have gone so far.

But then what? What if Ngannou wins both those fights? Then Miocic, who will for sure have to fight and win at least once, will have a very strong case for a third crack at Ngannou. If he were 0-2 against the champ, no chance. But he’s not. They are 1-1.

Are you telling me you wouldn’t want to see a twenty-pounds-heavier Miocic go up against Ngannou one last time? I sure as heck would. I know you would, too.

Who else is out there? Ciryl Gane? Alexander Volkov? Sure. But this isn’t lightweight, where a loss sends you all the way down the ladder. Miocic is still a big, relevant name. It will be very easy to sell him going for the belt one last time.

So, of course, several things need to happen. This is a crazy sport. But if you consider who else is out there, Miocic could easily be fighting for the belt by next summer if things break his way. Crazier things have happened.

New representation for Jones will impact whether he gets the next shot at Ngannou.

Raimondi: This is one of the most interesting topics in all of mixed martial arts right now. Jones, the greatest fighter in the history of the sport, is without representation going into potentially the biggest negotiation of his career. I’m a firm believer that Jones challenging Ngannou for the UFC heavyweight title has a chance to be among the biggest fights in the sport’s history. The story writes itself. Ngannou is a terrifying destroyer, the most dangerous knockout puncher, perhaps ever, in MMA. And Jones has never truly lost in the Octagon. He’s the greatest champion to ever do it, moving up in weight to try and add the cherry on top of an already robust legacy.

Jones and Ngannou have already gone back and forth on Twitter, adding to the intrigue and the storyline. Jones and UFC president Dana White have gone back and forth publicly, too. But that has been more disappointing. The two sides don’t appear to be very close on a deal and it seems like Lewis is going to get the shot at Ngannou first. That’s playing with fire for those wanting to see Ngannou vs. Jones. Lewis is incredibly gifted and has only improved. He can knock out any fighter on the planet. Plus, he owns a win over Ngannou already, albeit in a listless affair.

After an 11 year journey as @JonnyBones management team, First Round Management and Bones have amicably decided to part ways. We are proud of him and the work we’ve done. We wish him the best going forward.

What if Lewis were to win and become champion? We might have lost Ngannou vs. Jones forever.

Would a new management company help Jones in these negotiations? I’m going to say real. But let’s be very clear here. First Round Management, led by the Kawa brothers Malki and Abe, was never involved with these discussions with the UFC about Ngannou vs. Jones. The Kawas are absolutely not to blame for things not going smoothly, so calm your Twitter fingers. Jones was representing himself in what had been rather brief talks thus far.

There’s no doubt a professional speaking on his behalf will get him closer to a deal. Perhaps Jones gets things settled with representation and it makes the negotiations with the UFC easier. As incredible as Jones is in the cage, he is not an agent.

White has said Jones is asking for $30 million for the bout. Jones has tweeted that is not true, that he just wants to be paid fairly and he feels like he has been underpaid for the last decade as he sat atop the sport.

For this megafight, the UFC — owned by a now-public company in Endeavor — has to bend its budget a bit, compared to any other title fight. The heavyweight division is volatile, so who knows how long Ngannou stays on top — further necessitating an accelerated pace if the goal is for him to face Jones. And Jones is closer to the end of his career than the beginning.

The time for this historic fight is now. The fans want to see it, and that’s what the UFC has boasted that it cares about the most, unlike boxing promoters. Hopefully a new agent or manager for Jones helps the two parties come to terms.

Dustin Poirier reacts to Conor McGregor donating $500K to a Boys & Girls Club in Louisiana, saying that ultimately charity wins and people will be helped.

McGregor’s new-found animosity toward Dustin Poirier will serve him well in their trilogy bout.

Okamoto: Not real. I guess it can’t hurt … but if McGregor wasn’t already motivated before this recent spat with Poirier, that would be a huge problem — and frankly, would indicate where he is in his career.

McGregor has all the motivation in the world for this bout. Poirier knocked him unconscious less than four months ago. Poirier is also considered, right now, to be the best lightweight in the world. Plus, McGregor has lost three of his last four fights (if you include the loss to Floyd Mayweather).

You’re telling me he needs a public Twitter battle on top of all that to get up for this fight? Again, adding a personal element to the matchup, sure, I don’t think it’s a bad thing. But if McGregor actually needs that to perform? That would be a bad thing.