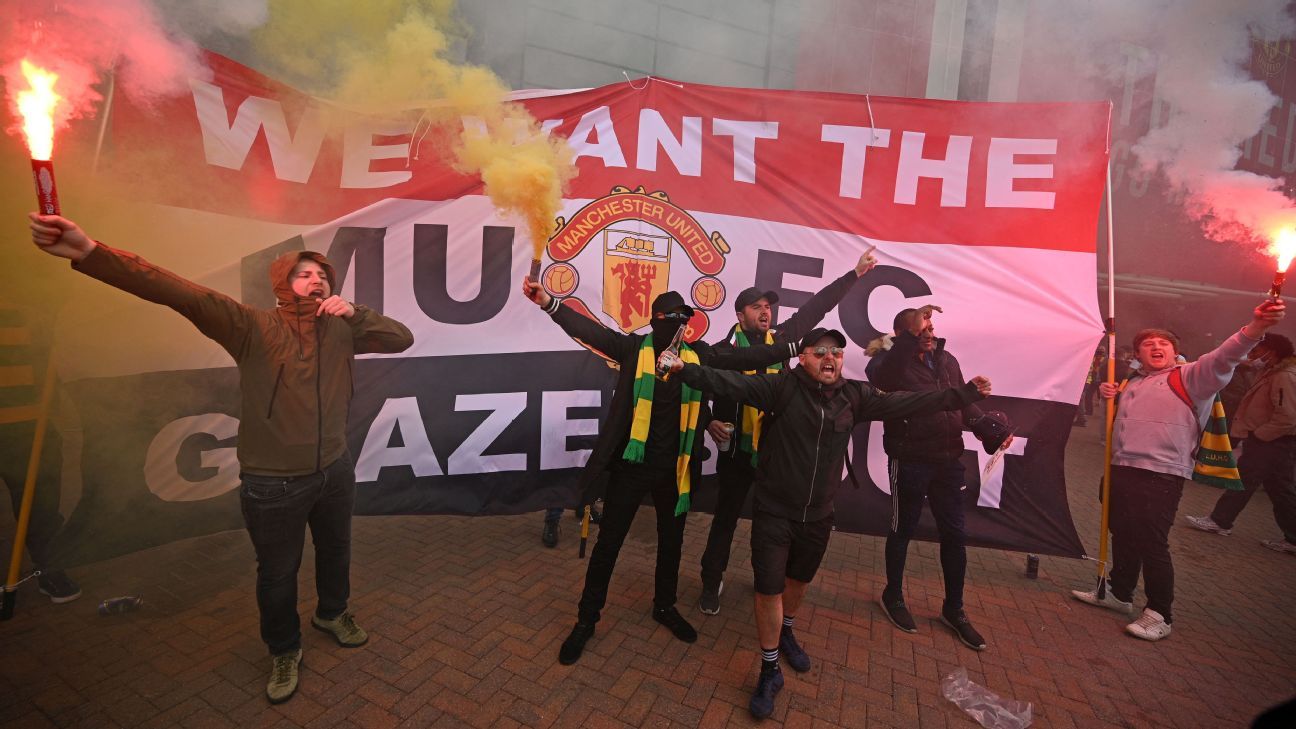 MANCHESTER, England — It is widely-accepted that every figure of authority involved in the failed attempt by 12 clubs to form a European Super League last month misjudged the mood of their team’s fans — and those of many others — before hastily pulling the plug on the whole idea. None, though, stirred up a hornets’ nest quite like the Manchester United-owning Glazer family.

Supporters have always been suspicious of the Glazers’ motives ever since they took control in 2005, believing them to be driven purely by money and the opportunity to exploit the club brand’s commercial power.

As such, their involvement in the Super League cabal merely confirmed those suspicions and deepened their unpopularity. But Sunday’s shocking events at Old Trafford, when protesting fans forced the postponement of the Premier League game against Liverpool, offered a stark example of deep-rooted enmity

While post-Super League protests elsewhere had been, on the whole, peaceful, the botched breakaway plans simply poured salt into existing wounds at United and triggered rebellion that led to the fixture regarded as the English game’s biggest being called off because, in the words of the Premier League, it created a “dangerous situation that should have no place in football.”

And it was dangerous; a Greater Manchester Police statement, released after the postponement was confirmed, revealed one officer required emergency hospital treatment after sustaining a “significant slash wound to his face” from a thrown bottle. Police added that “bottles and barriers” were thrown at horses and that United staff had to “lock themselves in rooms” as protesters breached the Old Trafford security cordon.

Images of the protest, which had been publicised in the days prior to the game, saw fans let off flares at the United team hotel before up to 200 forced their way into the stadium and onto the pitch, where they climbed on goalposts, stole corner flags and footballs and entered the tunnel area and dressing rooms, which saw COVID-19 protocols breached in the bio-secure red zone.

While the trouble flared, United and Liverpool’s players remained holed up in their hotels, with neither able to make the short journey to Old Trafford.

United supporters’ antipathy toward the Glazers dates back 16 years, when the Florida-based family plunged the club into debt to the tune of £540 million with a leveraged takeover. There was protest at the time, with warnings voiced that such an ownership model would see club money spent on the servicing of loans rather than the acquisition of star players.

Glazer brothers Avram, Joel and Bryan needed a police escort to escape a group of over 100 angry fans at Old Trafford in the days after the takeover and supporters have railed against the owners ever since. Indeed, some simply stopped following United, with one group forming non-league team FC United of Manchester in protest.

However, many remain loyal and, pre-pandemic, the club boasted the largest average attendance in the Premier League, with more than 75,000 consistently attending home games. And therein lies the contradiction; despite their disdain for those in charge, fans still turn up in their thousands, and the Glazers know it.

Conservative estimates suggest that debt payments and share dividends have seen over £1 billion taken out of the club under Glazer ownership, figures that contrast the actions of Manchester City owner Sheikh Mansour bin Zayed al Nahyan, who has poured over £1 billion into United’s neighbours since his purchase of the club in 2008.

In 2009-10, United fans attempted to oust the Glazers with a “Green and Gold” campaign based on the colours of Newton Heath, the club which grew into United in the early part of the 20th century. The aim was to force the Americans to sell to the “Red Knights,” a group of wealthy United fans, but despite David Beckham — then playing for Milan but a United legend — donning a green-and-gold scarf in an apparent show of support, the movement ran out of steam.

The Glazers, who have owned the NFL’s Tampa Bay Buccaneers since 1995, rode out that storm and have done likewise with others and, pre-pandemic, would regularly attend United games. One source told ESPN that they are unfazed by the hostility and unlikely to sell due to the prestige they place on being owners.

Their supporters — and they don’t have many — would argue they have always backed their managers with funds for new signings. Since Sir Alex Ferguson retired in 2013, United’s net spend on new players amounts to £742m; only City (£864.5m) have spent more among English clubs.

But a lack of communication with supporters, combined with the team’s lack of on-pitch success post-Ferguson, led to increased hostility toward the Glazers. The announcement earlier this year that Avram was selling £70m worth of shares, with none of the proceeds going back into the club, only added weight to fans’ claims they were only in it for the money.

Amid that background, the Super League plans proved to be the final straw for those fans who took matters into their own hands on Sunday. With new impetus, many years of resentment, anger and frustration reached boiling point.

With high-profile figures such as former United captain Gary Neville condemning the Glazers as “scavengers” in wake of the breakaway revelations, the Liverpool game was identified as a perfect stage to remind the world of their determination to force the owners out.

United fans want not just a change of ownership, but reform of football governance to ensure supporters of all clubs can have a voice on issues such as ticket prices and kickoff times, as well as preventing unscrupulous owners taking charge of clubs that have been rooted in communities for over 100 years.

But beyond the short-term impact of Sunday’s protests, they will not force the Glazers into selling United and that creates a problem for the club and Premier League. If the fans cannot get what they want, there is a risk of Sunday’s violence and disruption happening again.

There is no obvious middle ground or compromise that could see the two sides reach a truce and so, after a day of shameful scenes and imagery, England’s most glamorous fixture has been called off amid the sound of breaking glass and the roar of an angry mob.

Nobody emerges with their reputation enhanced and damage has been done to all sides.