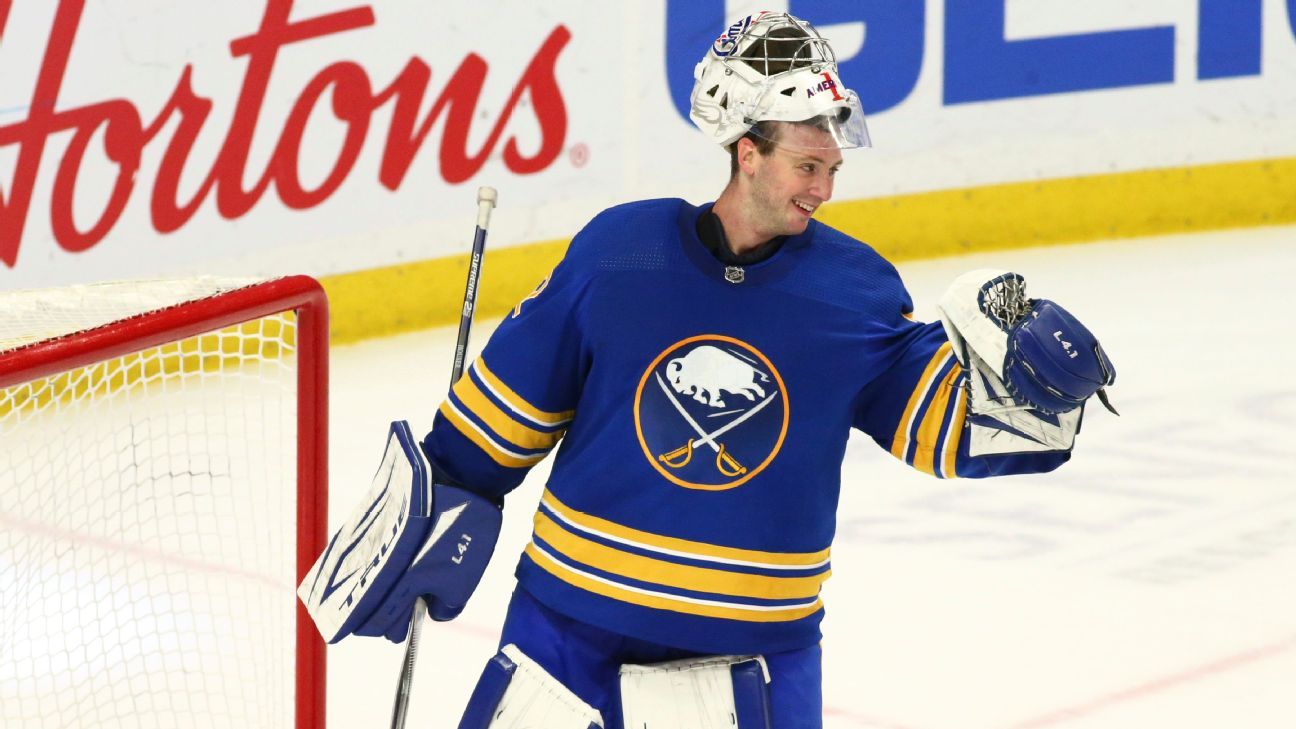 Tage Thompson and Rasmus Asplund also scored for Buffalo, which trailed 2-0 early in the second period.

“It’s super exciting. I’m not really in that great of game shape, either, I’ll admit that,” the 28-year-old Houser said. “After the game celebrating and everything, I could barely breathe, so I’m just trying to catch my breath right now, give my parents a shout after this and see what their take is on it.”

Houser spent the past 8 1/2 seasons in the minor leagues. It was his first game since March 7, 2020, with Cincinnati of the ECHL.

The Islanders fell to fourth place in the Eastern Division — one point behind Boston, which beat New Jersey 3-0. The Bruins also have a game in hand on the Islanders.

“I thought we played with a little bit of arrogance,” Islanders coach Barry Trotz said. “You know, let’s get in the inside, play our game and we were just saying, ‘Oh, it’s going to be easy, we’ve got a lead,’ and then we just made it easy for them.”

The teams finish their season series Tuesday night in Buffalo.

Thompson’s power-play goal got the Sabres on the scoreboard with 5:56 left in the second period and ended Varlamov’s shutout streak at 248 minutes.

Asplund tied the score with 8:35 remaining in the third.

Reinhart gave the Sabres a 3-2 lead with 4:04 left and sealed the win with an empty-netter, his career high-tying 25th, with 52 seconds to go.

“A hundred percent (disappointing),” Islanders defenseman Adam Pelech said. “Even though we clinched a playoff spot and had an emotional weekend (against the New York Rangers), that’s not an excuse. … We need to be better tomorrow night and going forward for the rest of the season here heading into the playoffs.”

Buffalo signed goalie Stefanos Lekkas to a professional tryout deal on Monday. Lekkas was the backup for the Sabres’ AHL team in Rochester and is 1-4-1 with a .863 save percentage with a 4.32 goals-against average. He backed up Houser on Monday night due to injuries to goalies Dustin Tokarski, Ukko-Pekka Luukkonen, Carter Hutton, and Linus Ullmark.