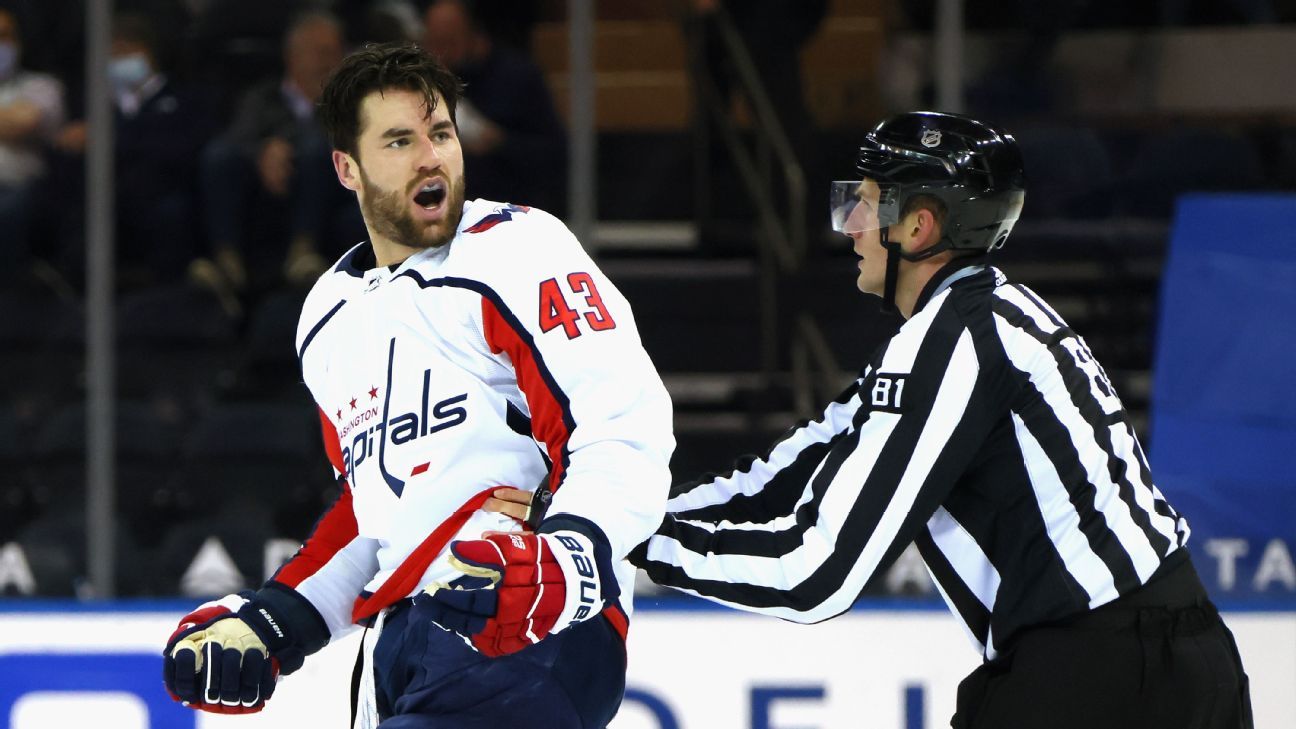 Washington Capitals forward Tom Wilson is eventually going to do something to an opponent that will result in him missing 40 games. Maybe 60 games. Maybe an entire season.

But the NHL department of player safety is not the NHL department of pre-crime. It can’t suspend players based on what their actions might lead to in the future. Nor can it take an incident that doesn’t rise to the level of a suspension and retrofit it as a way to ban Tom Wilson just because the majority of fans and pundits are trying to will it into existence, because he’s already been suspended five times and they want him out of the league.

Wilson was fined $5,000 for punching New York Rangers forward Pavel Buchnevich in the back of the head on Monday night while he was face down on the ice. Buchnevich became entangled with Capitals goalie Vitek Vanecek, and Wilson went after him. Rangers center Ryan Strome pulled Wilson off his teammate, and Wilson began engaging with him. Rangers forward Artemi Panarin jumped on Wilson’s back to pull him off Strome. Wilson responded by flipping Panarin to the ice, which the Rangers said caused an injury that will keep the star winger out of their final three games.

The department of player safety correctly identified these two instances as commonplace within the context of a post-whistle scrum around the goaltender. There’s an entire YouTube compilation of players protecting their goalies; see how many Wilson-esque “attacks” you can find. If you want this to be legislated out of the sport, have at it: There will be suspensions every week until morale improves. But I don’t think anyone really cares about either a punch or player thrown … unless it’s Tom Wilson doing the throwing.

Repelled as I am by the hyperbolic discourse surrounding Wilson every time he does something like this — I mean, there were people unironically comparing his actions on Monday to the Todd Bertuzzi incident that ended Steve Moore‘s career — I’m not here to defend Tom Wilson.

He’s a reckless player with little regard for the safety of opponents, fitting the requirements of the role in which he’s been cast. He’s going to really cross the line again at some point, and the department of player safety is going to justifiably drop the hammer on him. Believe me: They want to. They’re as sick of this circus act much as you are.

But the reason Tom Wilson does Tom Wilson things is not because the NHL department of player safety refuses to issue unwarranted suspensions, or rule on what he might do one day. It’s because this league, this sport, his team and the culture enable him to keep doing what he does. The list of enablers includes:

No one in the NHL wants to disparage its on-ice officials, but the sense I got in calling around on Tuesday was that the decision not to eject Wilson from the game was baffling. There’s all manner and sort of latitude given to the referees for making that determination, and Wilson had no business playing in the third period. That he scored a goal while Panarin was unable to return is absolute salt in the wound for the Rangers. Discipline begins on the ice; it continues with the department of player safety.

The NHL department of player safety

If there’s one primary ask of NHL player safety from those in the league, and those who watch the league, it’s consistency on punishments. What that’s led to are unofficial levels of punishment for different infractions. It’s not about a player being a repeat offender, but rather what offense he’s repeating.

As that relates to Wilson: He’s been suspended five times. Three of them were for illegal checks to the head. Two of them were for boarding, including that hit on Brandon Carlo in March. Let’s say his next offense is slashing or spearing a player with his stick. As the department of player safety edict goes, that play would be judged on its own merits, although Wilson’s prior suspensions would be taken into account. It doesn’t go from 20 for a hit to the head to 25 for a slash that breaks a wrist. There isn’t really a “totality of his behavior” approach to suspensions. Perhaps there should be.

But the department of player safety is also restricted in what it can do to someone like Wilson. Take the $5,000 fine levied this week. “The maximum allowable under the collective bargaining agreement” has become a punchline for fans in these announcements, but it’s also exculpatory for the department: The CBA caps how much they can fine a player.

For all the debate about whether suspensions are a deterrent for illegal actions on the ice, there isn’t another way for the league to impact a player financially for plays like the one Wilson engaged in this week. Plays that deserve a fine, but perhaps not a suspension. They’d love to wallop Wilson in the wallet. The players’ union has fought against raising the cap on fines.

The NHL can’t just suspend Tom Wilson for 50 games, because the NHL Players Association collectively bargained to have mechanisms put in the place to appeal suspensions that are six games or greater, and have them reduced by a neutral arbitrator. This was added to the CBA in 2012 as a safeguard against the department of player safety issuing a massive suspension and having NHL commissioner Gary Bettman as the final judgement on appeal, a.k.a. a rubber stamp on the decision the people he hired already made.

We know this because the PA has already done it once with Wilson.

He was suspended for 20 games after an illegal check to the head of St. Louis Blues forward Oskar Sundqvist. Bettman upheld that suspension. The NHLPA argued, successfully, that Wilson’s previous suspensions were debated internally at the department of player safety as an indication that they were not “consistently dangerous.” The PA also argued that 20-game suspension was an arbitrary number that the NHL conjured for Wilson, something with which neutral arbitrator Shyam Das agreed, reducing the suspension to 14 games.

The NHLPA seeks to protect its players more from egregious suspensions and large fines than it does from their fellow players seeking to do them harm. Back in the fighting era, there used to be a mantra in the NHL: “Let the players police themselves.” It’s about time the NHLPA adopts that mantra and stops enabling its repeat offenders.

The Washington Capitals published and deleted a tweet on Monday night that spoke volumes about their approach to Tom Wilson:

This @Capitals tweet has now been deleted. I get supporting your teammates, but tough look when that teammate is Tom Wilson. pic.twitter.com/gNIAPcnIIi

Wilson is paid handsomely to “live rent free” in the minds of opponents, while scoring the occasional goal. He’s the de facto enforcer for their skill players and, as we saw Monday, their goaltenders. His physical play can be a momentum-shifting force in a game or a series, even if the shift happens for nefarious reasons, from his hits that took out Pittsburgh defenseman Brian Dumoulin and forward Zach Aston-Reese in the Capitals’ 2018 playoff win over Pittsburgh, to removing Panarin from the third period of Monday’s game against the Rangers.

All of this benefits the Capitals, as long as Wilson remains in the lineup. They have no reason to require him to change as long as he knows where “too far over the edge” is.

There’s precedent for teams reeling in a reckless player. The Penguins are one of them, back in 2011. At the same time team owner Mario Lemieux and then-GM Ray Shero were calling for much harsher penalties for hits that targeted the head, they employed forward Matt Cooke, who seemed incapable of hitting any other way. Cooke was suspended five times from 2009-11, culminating in a 17-game ban for a hit to the head of then-Rangers defenseman Ryan McDonagh.

Lemieux, Shero and coach Dan Bylsma sat Cooke down and sternly explained the right and wrong ways to play effectively as a physical player. The following season, he had 44 penalty minutes and a career-high 19 goals, and the Pittsburgh media nominated him for the Bill Masterton Memorial Trophy for dedication to hockey.

(In 2014, he would be suspended seven games for a knee-on-knee hit on Tyson Barrie while with the Minnesota Wild. A tiger, attempting to change its stripes, yadda yadda.)

Where Mario Lemieux was absolutely correct in all of the Matt Cooke conjecture: That teams need to be held more responsible for their players’ actions. He suggested to Gary Bettman that teams get fined between $50,000 and $1 million for each suspension, with escalating fines for repeat offenders. Something that might, in theory, make a team thing twice about enabling their player.

Wilson’s antics stick out like a sore thumb to the eye because he’s one of the few players still engaging in them. That’s because the NHL is having an identity crisis.

The league is in a purgatory of its own making, stuck between the violent physicality the league was built on for decades, and the speedy offensive majesty of its current galaxy of young stars. It wants to be both. It’s frequently neither. So when there are flashpoints of violence today, even the pedestrian ones leave fans aghast because they’re increasingly out of step with where the game is today.

I’m no longer convinced the NHL can have it both ways, and it’s clear in which direction the sport wants to go. Fighting has declined for a decade. Teams no longer have brutes populating their fourth lines and third defensive pairings. At a time when the NHL is making a calculated effort to attract new generations of fans, perhaps it’s time to lean all the way into those skill players.

Tom Wilson is the primary reason we keep seeing “Tom Wilson things.” Ask around the NHL, and the one thing you hear about him is that he’s absolutely oblivious to his own strength and size. That he enters commonplace interactions — a hit along the boards, a post-whistle scrum — and turns them into something injurious. “He’s a black belt in a bar fight,” is how one source put it.

That obliviousness manifested in the penalty box last night, when he stood there flexing like he’s at a “Floribama Shore” audition after injuring Panarin. No concern. No contrition. And within that game, no consequences beyond a 10-minute misconduct that had him back for the third period.

It’s in those moments when you realize that Tom Wilson is never going to stop being Tom Wilson, because of all people and processes around the NHL that continue to enable him. If your aim is to never see Wilson play in the NHL again, that’s what has to change, because obviously he won’t.