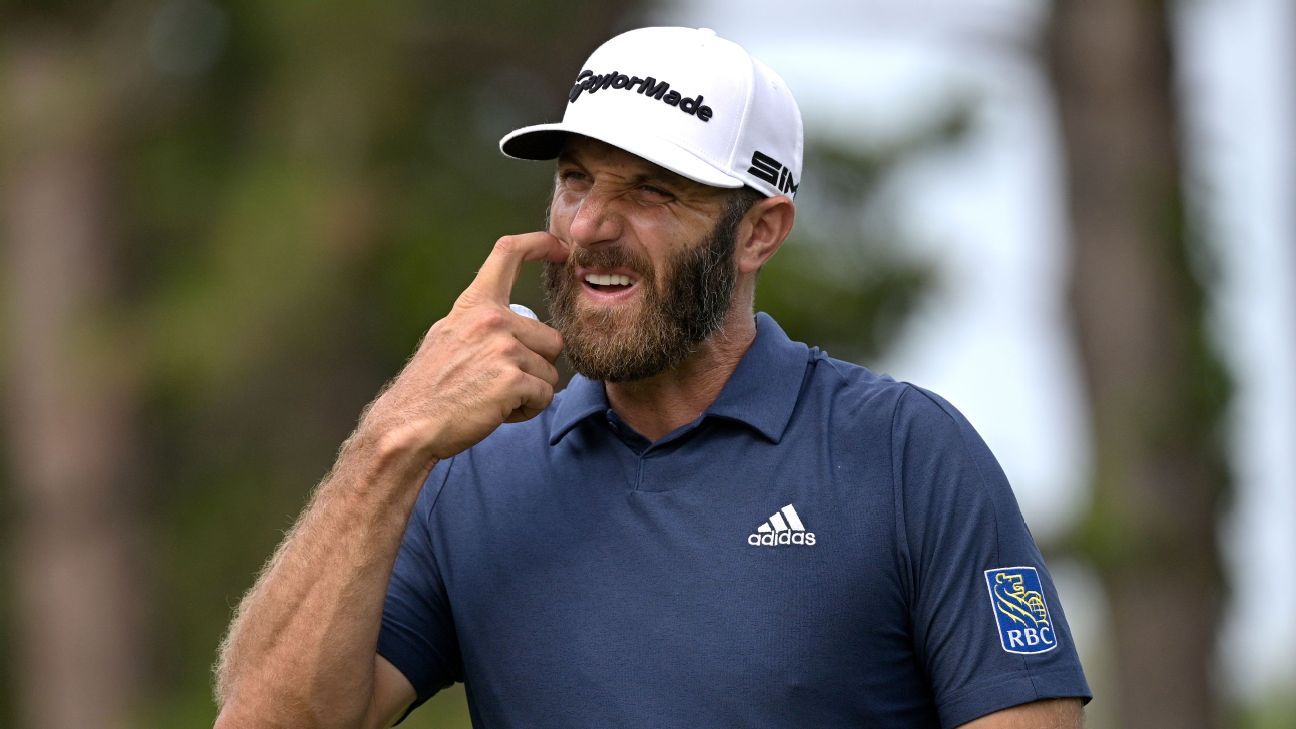 The weeks following the Masters are typically sleepy, and this year is no different. After the buildup to the year’s first major championship, it is understandable that the world of golf collectively exhales.

The RBC Heritage in Hilton Head, South Carolina, has a cool vibe. New Orleans is now a team event. This past week’s Valspar Championship, won by Sam Burns, saw a little bit more of the intensity that we are used to seeing.

Expect it to ramp up a bit more now.

This week’s Wells Fargo Championship in Charlotte will see a number of players, including Rory McIlroy, Bryson DeChambeau and Jon Rahm, return following for their first events since the Masters. And two weeks from now, the season’s second major, the PGA Championship, returns to its place in May after COVID-19 completely altered the 2020 major calendar.

Here is how things are shaping up as the next major approaches at Kiawah Island’s Ocean Course.

Lonely at the top

Dustin Johnson has been the No. 1-ranked player in the world dating to last August, when he was on an amazing run that saw him play 11 tournaments through this year’s Genesis Invitational, with just two finishes outside of the top 10 and nothing worse than 12th.

During that span, he won three times worldwide, including a record-setting Masters victory in November for his second major title.

But since then, Johnson has cooled considerably. He has gone six straight tournaments without a top-10 finish, which might not seem like a big deal but it is just the second time Johnson has done so in the past eight years.

In five of the tournaments, Johnson finished outside of the top 25, including a missed cut at the Masters last month. His best finish is a tie for 13th at the RBC Heritage. At the Valspar Championship, he tied for 48th.

For all his struggles, Johnson said he is not far off.

“The golf swing feels much better than it has in the last three or four months,” he said. “Hitting the shots I want to hit, driving it fairly good. Pleased with everything.”

If there has been an area of concern, it has been putting. Johnson ranked 50th in the field in strokes gained putting for the week and has lamented that aspect of his game recently.

He’s not playing this week at Quail Hollow, but will play the AT&T Byron Nelson next week leading into the PGA.

Hideki Matsuyama returned home to a hero’s welcome in Japan after winning the Masters — then went into a two-week quarantine. Last week, he was honored by Japan’s prime minister, Yoshihide Suga. Matsuyama is not playing this week, but will play the Byron Nelson prior to the PGA.

It is difficult to get a handle on who is trending in the right direction with just two weeks before the PGA. It was a nice victory for Stewart Cink at the RBC Heritage, but other than Harbour Town and Kiawah being in the same state, there’s not much correlation between the two venues. The Cameron Smith/Marc Leishman win at the Zurich Classic suggests at least the form of the two Aussies is good. Burns was a first-time winner at the Valspar and is now all but assured of a spot in the U.S. Open as well.

Players such as Max Homa — who is defending this week at Quail Hollow — Keegan Bradley and Louis Oosthuizen have played good golf since the Masters. Will Zalatoris, runner-up at the Masters and ranked 28th in the world, is back at Wells Fargo after a tie for 42nd at the RBC Heritage.

McIlroy missed the cut at the Masters and DeChambeau finished a disappointing tie for 46th. Rahm, who is ranked third in the world, quietly tied for fifth at the Masters. His form has been good all year, but he never got on track at Augusta National; his wife gave birth to the couple’s first child the Saturday prior. All are playing for the first time this week since the Masters.

Justin Thomas returns to the venue where he won his lone major championship, the 2017 PGA at Quail Hollow. The Players Championship winner, who looked so good in closing out that tournament in March, has struggled on the greens and was frustrated at his performance over the weekend at the Valspar.

“If I’m putting well this week, I’m winning this tournament without question,” Thomas said. “I’m hitting the ball well. I feel like once I can see a couple fall in from that midrange, it might open up a little bit.”

Brooks Koepka tried to play through his right knee issue at the Masters and missed the cut. Later, he said we might not see him until the PGA. That appears to be the case. There has been no word on his recovery, but he had originally planned to play the Valspar Championship and ended up skipping it.

The Ocean Course at Kiawah Island has 10 holes hugging the Atlantic Ocean, with the other eight running parallel to the water. So there will be some excellent views. How it plays depends largely on the weather. In its only other PGA appearance, the Ocean Course was mostly soft due to rain, and McIlroy cruised to his first PGA title and second major victory. Some wind would really help. Kiawah was also home to the 1991 Ryder Cup, won by the United States in what was dubbed as the “War By The Shore.”

We are beginning to see spectators return to golf tournaments in growing numbers. No attendance figures were issued at the Valspar Championship, but judging by those around tee boxes and greens in key areas, it seemed the most to date. You can expect the same this week at Quail Hollow for the Wells Fargo Championship. And while the PGA Championship has said it is limiting spectators to 10,000 per day, don’t be surprised if that number creeps closer to 15,000 per day. Along with that comes more noise, more cheering and more of a sense of normalcy.